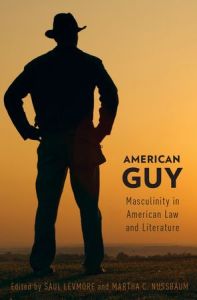 American masculinity has recently been reasserting itself as a legitimate topic for study. As recently as 2013, Stony Brook University (SUNY) established the Center for the Study of Men and Masculinities under the directorship of Michael Kimmel, one of the foremost voices in masculinity studies in America today. A new addition to the ever-expanding body of work on the topic of masculinity is American Guy: Masculinity in American Law and Literature, edited by Saul Levmore and Martha C. Nussbaum. The third in a series of studies produced by the University of Chicago Law School, these collections aim to add to the field of the so-called ‘law-literature movement,’ examining the intersection between these two areas in an attempt to create greater insight into both, with the editors observing that ‘works of literature depict and often criticize social norms and stereotypes’ (2). American Guy adds a third element into the mix with the addition of masculinity in American culture, creating a mission statement for the collection where ‘literature is a means of reflecting on the role, and even the gender, of law as it operates on a society that often glamorizes the manly man who is outside the law’ (2). This is certainly a valid approach to the topics at hand, but it produces results of varying quality across the volume.

Many of the essays contained in the collection arise from conference proceedings. Divided into two sections, the first, ‘American Guys’ deals primarily with texts about white men while the second, ‘Outsiders’ considers texts about so-called others and minorities. In an innovative approach, the editors also invited sitting or retired US judges to contribute to the volume of essays. Most of the contributions in the first part are written by judges, and as such are more concerned with the practice of law or how a certain piece of literature influenced them than with any particularly strong analysis of the text under discussion.

While certainly an interesting approach, it can lend the first half of the book an uneven quality, with the literature part of the equation taking a backseat to the law and masculinity elements. These particular essays tend more toward personal reflection than substantive contribution to the subjects under discussion. Although the editors flag this in the introductory chapter as an innovation – and it is certainly interesting to read these reflections – the overall value of their inclusion in the collection is questionable. William Alsup’s essay ‘On the Trail with Melville,’ for example, is ostensibly about ‘Bartleby.’ While it certainly raises some challenging interpretations of manhood and masculinity, it also leaves the reader wondering if Alsup ever got around to actually reading ‘Bartleby’ after his hike through the Sierras. 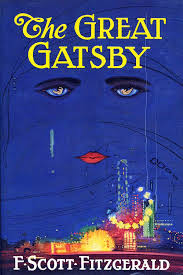 There are, however, two notable stand outs from the first half of the collection. Robin West’s essay on tort law in The Great Gatsby, and Michael Warner’s insightful critique of the concept of ‘manning up.’ West’s thoroughly detailed and thoughtful treatment of tort law – the concept of a legal and moral wrong that would give the victim recourse to financial damages – provides an interesting take not only on an American literary classic, but also uses it to explore the increasing ineffectiveness of tort law over time. Although overlong, it is generally a successful attempt to create an intersection between the three elements that the collection intends to interrogate. Warner takes the idea of ‘manning up’ and uses it as a springboard to dissect concepts of manliness and masculinity in relation to everything from Rip Van Winkle to Leslie Fiedler. It is one of the few essays in the collection that seriously engages with what is understood by the word ‘masculinity’ or the phrase ‘manning up’ rather than resorting to, and accepting, their attendant stereotypes, taking issue with Fiedler’s argument that a failure to ‘man up’ is at the centre of most American literature. Warner suggests that where Fiedler saw a ‘failure to man up, we can now reread these same narratives as a rich field of examples for thinking about the precariousness of manning up and what happens when people try to opt out of it’ (155). 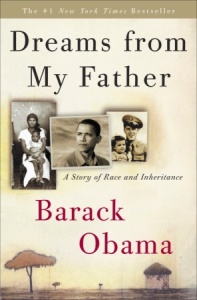 Where the ‘American Guys’ section is primarily focused on white American masculinity, the second half of the collection deals with what it calls ‘Outsiders’ and contains one of the best contributions to the whole book in David Halperin’s essay, ‘What is Gay Male Femininity?’ A thoughtful and provoking assessment of ‘third-sex theories,’ Halperin challenges stereotypes of social understandings of gender, femininity, and gay male culture, suggesting that the dominance in law and culture of a specifically heteronormative masculinity creates an environment where those who don’t conform to this supposed norm feel ‘pressure to repudiate’ their own experience (211). His essay creates an interesting tension between some of the other contributions to the volume which accept without much question the gender stereotypes he dissects. Elsewhere in this section, there are particularly stimulating contributions from Richard H. McAdams on Harper Lee’s To Kill a Mockingbird, and from Glenda Carpio on the construction of masculine identity in Barack Obama’s autobiography, Dreams from My Father.

Attempting to create an intersecting dialogue between the disciplines of law, literature, and masculinity studies is an ambitious goal. The essays in this collection raise genuinely pressing questions as to how a heteronormative approach to the legal system can have far-reaching consequences for all members of society. While American Guy might not fully answer the questions it raises, or achieve the goal of interdisciplinary dialogue with uniform success across its collection of essays, it unquestionably lays valuable groundwork for further work in the law-literature area and, as such, is a worthwhile contribution to the field.

Jenny is a PhD student in the School of English, Trinity College Dublin working on representations of the masculinity crisis in contemporary American fiction. Jenny is a Postgraduate rep for the IAAS (www.iaas.ie) and can be found online at https://tcd.academia.edu/JenniferDaly or (worryingly often) on Twitter @jennybdaly.
View all posts by Jennifer Daly →
Tagged  C20, C21, Gender and Sexuality, Masculinity.
Bookmark the permalink.