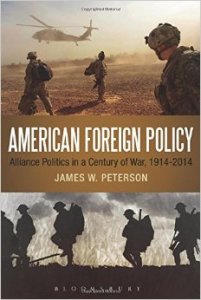 The United States has played a leading role in nearly all of the major military conflicts that have occurred throughout the century since the First World War. Nevertheless, fighting against the enemy, the USA has always been acting in cooperation with its allies. Focusing his attention on the allied countries that fought on the side of the USA over the multiple wars in the twentieth and twenty-first centuries and questioning whether without this considerable political and military support America could be considered as strong an opponent as it was, James W. Peterson discusses the reasons for American involvement in those conflicts.

Despite covering such a vast period, Peterson puts forward one chief argument that unites what, on the surface, seem like completely different wars: the USA has always had allies, i.e., the countries that supported, helped, and facilitated the approaching end of war. Scrutinizing the “century of war” from a perspective of alliance politics, Peterson divides his analysis into four parts, thus unveiling the changes in US foreign policy as well as the status of the country in the world arena from WWI to the War on Terror.

Discussing the first half of the twentieth-century, the author argues that starting from WWI the USA gave up its status as an isolated country. That was, indeed, the turning point in the history of politics of the USA as it became one of the most influential states on the world arena both military and politically. Peterson goes on to investigate the partnership between America, the USSR, France, and other countries to defeat Nazi Germany and its ally Japan. The author argues that US reluctance to intervene in WWII as well as the distance the country was away from its alliances, both “geographically and psychologically” (38), to certain extent enfeebled the latter. However, as Peterson concludes, in the end, both in the course of WWI and WWII “the allies did benefit from American capabilities” (17).

Peterson’s study proceeds with an examination of US foreign policy during the Cold War by analyzing the complicated relationship between the USA and the USSR, addressing the issue of a Western struggle against Soviet communism. The key events that are discussed in this section are the Korean War, the Berlin Crisis, the Vietnam War, and the Cuban Missile Crisis; thus, the author focuses on “the three critical regions during the long history of the Cold War” (87) – Asia, Europe, and Latin America. Meticulously analyzing the historical aspects of the events as well as the role the USA and its allies played in them, Peterson detects the grounds for the course of US foreign policy to be a “success or failure” (87). Namely, he argues that “geographical and cultural closeness” (87) that have always existed between the USA and its neighbour, Latin America, helped solve the Cuban Missile Crisis. The “common culture, parallel democratic patterns of governance, and key organizational links” (87) that united Europe and the USA guaranteed a successful resolution of the Berlin Crisis. However, the relationship between the USA and Korea, and the USA and Vietnam was quite the opposite. Both culturally different and geographically distant, the countries had hardly anything common to share, apart from certain political beliefs that made the South (both in Korea and Vietnam) ideologically closer to the USA.

In the next section Peterson investigates the role of the USA and its allies in two brutal wars of the last decade of the twentieth century, i.e., the First Gulf War and the Balkan War. Historicizing these events and examining the function of the West in the Middle East and later in Eastern Europe, Peterson pinpoints the help provided by the United Nations in both conflicts, including the pivotal “assistance . . . in the areas of infrastructure” (136), as well as discusses “the existing capabilities of NATO nations” (120), foregrounding the countries of NATO as they ceased the hostility and aggression in both wars. Therefore, Peterson accurately delineates the West as a firmly organized construct that was strategically and militarily prepared to intervene in both regions.

Finally, the author deals with more recent events – the 9/11 terrorist attacks and the following response from the West, namely the War on Terror. Peterson examines two US interventions in the Middle East – the Afghanistan War and the Second Gulf War – and the long-lasting struggle against the Taliban and Al Qaeda. The focus in this part is on three “emergent threats” (152) at the beginning of the twenty-first century: “the threat of Islamic fundamentalism, global terrorism, and weapons of mass distraction” (152). Peterson demonstrates that apart from the UN and the nations of NATO, there were many other countries involved in the global war. Eventually, the author addresses the problem of the most recent wars in the countries of the Middle East including Egypt, Israel, Libya, Palestine, Syria, etc., again tackling the issue from the perspective of western participation, thus examining the role of the USA and its allies in the wars. Peterson underscores the difficulty of alliance work in the post-Cold War era that emerged because of “the complexity of the enemy” (152). However, he insists that international organizations like NATO, the EU, and the UN are influential world agents that, indeed, have enough resources and power to take the situation under control and help resolve conflicts.

All in all, James W. Peterson’s American Foreign Policy: Alliance Politics in a Century of War, 1914-2014 is an exhaustive analysis of America’s participation in global conflict during the last one hundred years. It is an excellent source where the author skillfully combines history with US foreign policy and politics of alliances. Peterson manages to provide his readers not merely with an overview of the key political and military events of the twentieth and twenty-first centuries but offers a thorough investigation. The author’s approach to US foreign relations is significant as it is aimed at uncovering the general tendencies as well as pivotal changes in the course of US foreign policy over the time. His speculation that the alliance cooperation is a rather positive tactics that can help prevent other wars in the future makes a valuable contribution to the already existing scholarship.

Review of "The Market Logics of Contemporary Fiction" by Paul Crosthwaite
Must-Hear Podcasts: A List for Students and Scholars of American Studies
Book Review: The Invention of the American Desert: Art, Land, and the Politics of Environment edited...
Review: Queer Subjects and the Contemporary United States
Book Review: Louis D. Brandeis: American Prophet by Jeffrey Rosen
Book review: A Short History of U.S. Interventions in Latin America and the Caribbean by Alan McPher...
Book Review: Affect and American Literature in the Age of Neoliberalism by Rachel Greenwald Smith
Book Review: Massive Resistance and Southern Womanhood by Rebecca Brückmann

Tatiana Prorokova is a doctoral candidate in American Studies at Philipps-University of Marburg, Germany. She is working on her Ph.D. project that analyzes the representation of U.S. interventionism from 1990 onward and American culture of imperialism in film and fiction; she combines U.S. Foreign Policy with Literary and Media Studies. She received her M.A. in English and American Studies from Otto-Friedrich-University of Bamberg, Germany, and a Teaching Degree in English and German from Ryazan State University, Russia.
View all posts by Tatiana Prorokova →
Tagged  9/11, C20, C21, Cold War, Foreign Policy, Politics.
Bookmark the permalink.