Book Review: American Education in Popular Media: From the Blackboard to the Silver Screen edited by Sevan G. Terzian and Patrick A. Ryan 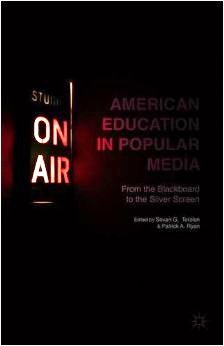 Education, like most facets of American society, has historically been subject to popular media representations.  As this volume edited by Sevan G. Terzian and Patrick A. Ryan illustrates, popular media portrayals of education have often gestured toward ongoing debates about the role of education within society as well as competing visions of ideal American futures.  Building upon conversations within cultural and media studies, Terzian and Ryan have curated a collection that grapples with the relationship between intent and interpretation—between the way popular media images (mis)represent educational circumstances and the way such images shape how Americans have expected to see their educational surroundings.  The resulting series of essays reveal enduring tensions between classroom practices and popular representations, tensions Americans within and outside of educational institutions have mined for well over a century to stake arguments about gender, class, race, and ability.

In this collection’s introduction, Terzian and Ryan point out several overarching trends and tropes within popular media portrayals of U.S. education.  Such narrative devices have allowed storytellers to pose core questions about the relationship between education and American society while placing disproportionate onus on educators and educational institutions.  Archetypical delinquent teens and disengaged teachers allowed authors and filmmakers to question who belonged in schools—or what the point of going to school even was—without genuinely challenging the very systems that enabled classroom drama, both fictive and actual.  Hence Terzian and Ryan stress that, more often than not, popular media “have frequently aligned with dominant social and political views” (3), and rarely engage substantively with educational systems or structural socioeconomic issues. 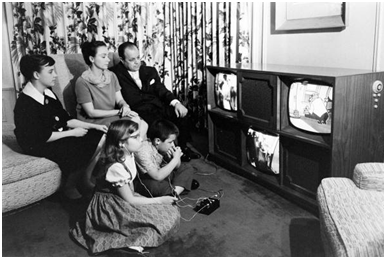 Figure 1 – “Three-eyed TV Monster,” photo by Francis Miller, for LIFE Magazine, 1961. Television programs have been one of many popular media vehicles for images—and arguments—about U.S. education.

The essays within this collection cover roughly a century of U.S. educational history, but can be roughly chunked into three thematic sections:

The first three essays examine print-based tropes—the self-made college man, the spinster schoolmarm, and the reluctant schoolboy—to show how popular media reimagined and gendered the relationship between the U.S. middle class and education during the late-nineteenth and early-twentieth centuries.  Analyzing short fiction published in Collier’s Weekly, The Saturday Evening Post, and other similar periodicals, Daniel Clark argues that emergent national print media created “active forums of cultural formation” (15), within which the trope of the college-educated man refashioned linkages between higher education, business acumen, and masculinity.  Michelle Morgan, meanwhile, focuses on female educators’ and popular media’s conflicting portrayals of what constituted professional behavior during the Progressive Era—revealing how women in the urban Northwest invoked their rights as consumers to leverage access to a modern lifestyle as well as thwart popular images of teachers as dowdy, doltish, joyless spinsters.  Heather Weaver’s examination of early-twentieth-century magazine covers shows how images also gendered the middle class’ relationship to education; as both unresolved scenes and meta-advertisements, these covers questioned boys’ educability by existing methods while also invoking a national audience.  If anything, these essays show how popular media gendered the elision of “middle class” and “national” through depictions of educational actors.

The following three essays grapple with early Cold War-era filmic representations of the student-teacher relationship—and illustrate how portrayals of teachers and teaching were often used to reinforce the status quo, even when casting bleak scenarios.  Recurring postwar portrayals of teachers as martyrs, Patrick Ryan shows, never truly challenged educators’ meager salaries or lack of career prospects.  Rather, such images of “the self-sacrificing, morally upright teacher” (101) posed educators as vital tools for maintaining Cold War order; teachers demonstrated their loyalty by spending their moral capital to replicate white supremacist middle-class patriarchy.  The midcentury educational films that Amy Martinelli examines, by contrast, posed a different student-teacher relationship: That Boy Joe (1944), Boy With a Knife (1956), and other such productions often engaged with juvenile delinquency by offering guidance and sympathy rather than behavioral dicta.  Other student-teacher narratives were not so clear-cut, as Daniel Perlstein and Leah Faw illustrate in their reading of Blackboard Jungle (1955).  As they argue, this classic was an ambiguous hybrid, neither fully in love with nor wholly fearful of youth culture—but still a text adolescents and adults alike navigated to make sense of both the scope and limits of teenage rebellion. 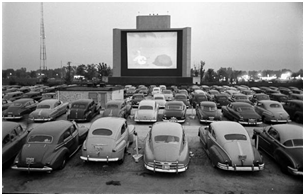 Figure 2–“Cicago Drive-In Movie Theatre” – photo by Francis Miller, for LIFE Magazine, July 1951; The drive-in was a popular venue for Americans to view films such as Blackboard Jungle. How would teens and adults have read the images of education in ‘Blackboard Jungle’ differently?

The final three chapters—the most enjoyable set—examine late-twentieth-century pop culture archetypes employed to indict the imagined condition of U.S. education.  Andrew Grunzke illustrates how television writers, drawing upon archaic Progressive Era ideas about the purpose of secondary education, used the fool character to criticize U.S. schools for practices long ditched by specialists.  This chasm between perception and practice plays a central role in Robert Dahlgreen’s examination of droning, sarcastic social studies teachers in late-twentieth-century pop culture, who reflected screenwriters’ discontent with the classrooms of their youth more than the adventurous and experimental pedagogical practices of the period.  Kate Rousmaniere’s concluding essay traces the “gendered identity of the principal” (195) in popular culture, ultimately noting that onscreen images of ineffective, emasculated, sometimes-megalomaniacal bureaucrats belie and ultimately distance Americans from the complexities of contemporary school administration.  Peggy Bundy, Mr. Hand, and Principal Skinner not only made audiences laugh about classroom calamities: they also transmitted arguments about the problems with American schools, arguments rooted more in myth and memory—of hellscapes filled with airheads and run by boors and tyrants—than in the many actual shortcomings of educational institutions during the late-twentieth century.

This volume soundly emphasizes popular media’s ability to shape public perceptions of U.S. education and, in turn, set normative expectations for future educational experiences.  What may have helped this collection, however, is more consideration of the public and critical pushback generated after the release of these popular media portrayals of teachers, principals, and schoolchildren. This is, to be fair, a criticism that may only make sense in the Internet era: online critical pop culture analysis is so thoroughly embedded in the process of cultural creation that a work of art also comes with several waves of criticism and defense—cascading interpretation and meta-analysis condensed into a long weekend’s onslaught of thinkpieces and #longreads.  Indeed, some online spaces engage in the very analysis this volume sets out to do, albeit for a broader popular audience.  While the pop media analyzed in this volume was largely produced before the Internet era, I do wonder if some of the methods and theoretical anchorage for this work would have changed had this volume included twenty-first century artistic portrayals of U.S. education.

In any case, this book is most useful for those who want to explore the cultural processes by which education becomes politicized outside the classroom—and fortunately, that audience is much broader that a select set of academics.  If popular culture and education are in constant co-creative tension, it stands to reason that people within as well as outside educational institutions would be interested in the enduring sociocultural political conflicts carried through—and created by—popular images of students, teachers, and schools.

Book Review: Nothing Ever Dies: Vietnam and the Memory of War by Viet Thanh Nguyen
Book Review: Say We Are Nations: Documents of Politics and Protest in Indigenous America Since 1887
Review of ANZASA Conference 2019: Community, Conflict and the “Meaning of America” 14-16th July, Uni...
Book Review: The Sum of Our Dreams by Louis Masur
Book Review: Battle for Bed-Stuy: The Long War on Poverty in New York City by Michael Woodsworth
Review: ‘The “Not Yet” of the Nineteenth-Century U.S.’, BrANCA Symposium
Book Review: Safeguarding Democratic Capitalism: U.S. Foreign Policy and National Security, 1920-201...
Conference Review: Recovering May Alcott Nieriker’s Life and Work, Université Paris Diderot

KJ Shepherd is a PhD candidate in the History Department at the University of South Florida. They are currently writing a dissertation on the ways in which Americans have used standardized testing since the end of World War II to fuel broader social arguments about ability, gender, race, citizenship, and the state.
View all posts by Keegan Shepherd →
Tagged  C20, Cold War, Gender and Sexuality, Masculinity, Media, Popular Culture, Race.
Bookmark the permalink.