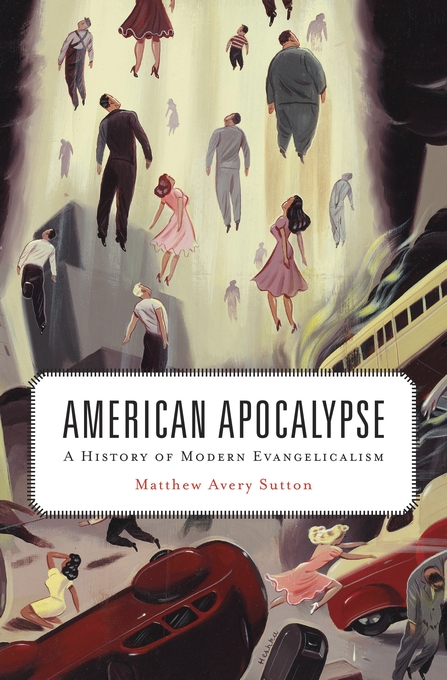 The aim of Matthew Avery Sutton’s ambitious new monograph, American Apocalypse, is to trace the development of modern evangelicalism in the United States from its late nineteenth century origins to the present day. Central to this story is the question of how the powerful conservative wing of the movement eventually became, during the height of its influence at the end of the twentieth century, a mainstream, unified force which was able to effect the outcome of elections. Today, appealing to born-again Christians remains a crucial component of the Republican party’s electoral strategy, as this year’s presidential primaries have demonstrated. By focussing on evangelical leaders’ attempts to use politics as a mechanism through which to change American culture, Sutton’s study sheds light on the causes and motivations behind this firmly-entrenched alliance between the GOP and conservative evangelicalism. In contrast to conventional wisdom on the origins of the ‘Christian Right’, which has often assumed that politically mobilised evangelicals emerged suddenly in the late 1970s in response to the insurgent liberalism of the civil rights era, American Apocalypse shows that the movement in fact spent most of the twentieth century attempting to penetrate the political sphere.

According to Sutton, it was conservative evangelicals’ premillennial eschatology that was the driving force behind their efforts to transform America and the world. At the turn of the twentieth century, amidst the growing influence of liberal Protestant theology and secularism, an increasing number of evangelicals began to preach that the ‘end times’—the literal apocalypse followed by the return of Christ to reign over the world for a thousand years—was imminent. But rather than simply wait for this inevitability to manifest, these evangelicals believed it was their duty to ensure that humanity was ready for the end of the world. This notion eventually became “the inspiration for aggressive action,” a call to convert as many souls as possible and to embark on a “moral crusade on contemporary culture” (p. 117).

For much of the first half of the twentieth century radical evangelicalism’s influence was limited by its organisational fragmentation and the movement’s lack of connections with America’s political elite. Up until the late 1930s, religious leaders in the two main epicentres of radical evangelical activity, the urban Northwest and various pockets of the Deep South, rarely cooperated. Meanwhile, the various factions of the movement often failed to agree upon the appropriate responses to the defining social, political and economic issues of the period. But by the end of the 1930s radical evangelicalism had overcome many of the hurdles which were standing in the way of its mainstream success. To begin with, most radical evangelicals had dropped their reservations about being politically active, and agreed that the Republican party was the most suitable channel through which to pursue their agendas. Moreover, the events of the last three decades had increased the appeal of radical evangelicalism dramatically. The global cataclysm of two World Wars, combined with the emerging threat of the atomic bomb, appeared to vindicate many of the apocalyptic predictions that premillennialist evangelicals had been preaching for years. As a result, countless Americans were drawn to joining radical evangelical churches. The heightened popularity of the movement motivated radical evangelicals in the North and South to speak with a more unified voice, and to take the prospect of an alliance with the Republican party more seriously.

American Apocalypse adds to the recent body of work which has sought to discredit the “rise-fall-rebirth narrative” that dominated discussions of American evangelicalism at the end of the last century (p. xiii).[1]  Although it would not be until the early 1980s that radical evangelicals would attain the political resources required to exert a significant influence over the GOP, Sutton’s study convincingly argues that political engagement was “both a priority and a reality” for the movement from the late nineteenth century onwards (ibid). As well as making this important historiographical intervention, Sutton also demonstrates the significance of the two World Wars in helping to transform radical evangelicalism from a culturally and religiously marginal group into an organised, mainstream and hugely influential political force. The underappreciated importance of the Great War helps explain—but does not entirely excuse—American Apocalypse’s heavy bias towards the first half of the twentieth century. Sutton devotes just one of his eleven chapters to the last forty years of the twentieth century, failing, for example, to capture the complexity of evangelicalism during the decade of civil rights, second-wave feminism and the Vietnam War. On the other hand, Sutton’s pre-1960s slant does allow him to focus in considerable detail on other unexamined features of the movement, such as female and African American evangelicals, whose voices existed despite being stifled by the patriarchal and often racist culture of American premillennialism. Thanks to the ways in which Sutton reinterprets the origins of one of the Unites States’ most politically and culturally influential religious groups, American Apocalypse is an important and timely contribution to the field of modern American evangelicalism.

Laurence Connell has a PhD in political history from the IMT School for Advanced Studies in Lucca, Italy. His PhD examined how urban and demographic history influenced the republicanisation of white evangelicals in the late twentieth century. From September 2019, he will be a Teaching Associate in American and Canadian Studies at the University of Nottingham.
View all posts by Laurence Connell →
Tagged  C20, C21, Religion.
Bookmark the permalink.