Book Review: Affect and American Literature in the Age of Neoliberalism by Rachel Greenwald Smith 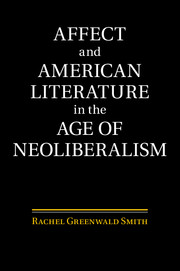 Rachel Greenwald Smith’s fascinating monograph argues against what she terms ‘the affective hypothesis’: the belief that literature should offer, and is most meaningful, when it transmits, ‘the emotional specificity of personal experience’ (1). She contends that the affective hypothesis functions invisibly, moving interchangeably between all aspects of the literary marketplace (1). She establishes a binary between what she coins ‘personal feelings’ and ‘impersonal feelings.’ Works that reflect how ‘emotions are increasingly understood as resources to develop and manage, rather than as instances of authentic experience’ are those she sees as evoking personal feelings (4). Smith venerates art that questions ‘our economic, political, and social convictions,’ which she states solicit impersonal feelings (4). An aesthetic of impersonal feelings is valuable, for Smith, because it does not conform to a market model that emphasises the reader’s ability to manage their ‘emotional portfolio’ (8).

In setting up this division between personal and impersonal feelings, each chapter places a series of contemporary texts in opposition. By establishing this binary, Smith does not allow for the possibility that a work can evoke both impersonal and personal feelings. However, this methodology does allow for a focused and informative discussion, and does not distract from the strength of her conclusions.

In her first chapter, Smith contends that Cormac McCarthy’s The Road is ‘exemplary of the primary quality critics attribute to contemporary aesthetics,’ that is, it is defined by personal feelings (48). The Road demonstrates a compromise between recognising ‘the materiality of language’ and yet managing ‘to convey a crushing sense of emotional urgency’ (48). In comparison to The Road, she turns to Paul Auster’s The Book of Illusions, and interestingly demonstrates the ‘typical,’ binary assumptions of the affective hypothesis through Brooke Allen’s review of Auster’s novel: ‘head versus heart; emblems versus people; allegory versus emotional affect’ (49). Counter to this, for Smith The Book of Illusions suggests how affective connections may be impersonal and contingent, ‘and distributed throughout social systems and environments in ways that fall outside wilful entrepreneurial investment’ (55). The Road and The Book of Illusions are so emblematic of her argument, that at the end of this chapter she provides a table in which she compares how the two texts elicit personal and impersonal feelings (58). 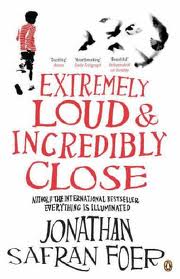 In assessing the personal feelings that define Jonathan Safran Foer’s Extremely Loud and Incredibly Close, Smith contends that the trauma of 9/11 is used to assert ‘U.S. centric values,’ mirroring how, for David Harvey, neoliberal States use catastrophes to form new forms of authority (66). Smith contrasts Foer’s mawkish novel with Laird Hunt’s The Exquisite, which she situates as impersonal because it undermines ‘any clear isolated view of catastrophe’ (75). Hunt’s novel therefore complicates interpretations of the trauma of September 11th, and the ‘incomprehensibility’ of 9/11 must instead be seen ‘as part of a complex system of interactions’ (75). This discussion of September 11th has wide-reaching implications – about periodization, for instance – and is something that bears further analysis.

After giving a wonderfully clear description of the distinctions between liberalism and neoliberalism (81), Smith argues that works like Dave Eggers A Heartbreaking Work of Staggering Genius are ‘able to function as they do because they are so sensitively aimed at the affective needs of a new generation of young adults who were largely raised under neoliberal assumptions’ (89). She compares the personal feelings Eggers’ novel evokes with the impersonal aesthetics of Ben Marcus’s collection, The Age of Wire and String. She asserts the structure of Marcus’s work, like Hunt’s novel, emphasises the destabilising process of what sociologist Bruno LaTour calls ‘tracing.’ As tracing associations always lead to the recognition of yet further connections, Marcus’ collection reflects LaTour’s idea, that mapping social connections undercuts the possibility of complete understanding, what Smith calls ‘mastery’ (93).

Her final chapter situates Richard Powers’s The Echo Maker as a ‘human-centered narrative,’ but one in constant interaction with the nonhuman – ‘other narratives with other centers’ (122). She contrasts the impersonal, ecological structure of Powers’s novel with Lydia Millett’s How the Dead Dream, postulating that the latter turns to ‘physical immediacy as a transformative force’ (105). She argues that this turn to the physical is not just politically questionable, but results in a novel that descends into ‘silliness’ (109). As with the chapter regarding trauma, this chapter is a fascinating and provocative addition to ecological criticism.

She concludes by arguing that literature should be seen as part of our ecosystem; literature can extend how Bruno Latour wishes to renew critique (99), and it can do so because ‘in its capacity to intensify affective connections to strangers, both human and nonhuman, that it can be understood to be socially and ecologically relevant’ (126). This monograph is consistently persuasive, and forthrightly argues for an important role for literature in critiquing neoliberal assumptions.

Alex Moran is a third year PhD student at the University of Birmingham. His research explores the concepts of genre and limits in contemporary American fiction, and the prevalence of so-called "literary" authors writing genre fiction. His dissertation focuses particularly on the work of David Foster Wallace, Jonathan Franzen, Colson Whitehead, Jennifer Egan, and Mark Danielewski.
View all posts by Alexander Moran →
Tagged  C20, C21, Literature, Politics.
Bookmark the permalink.