Book review: A Short History of U.S. Interventions in Latin America and the Caribbean by Alan McPherson 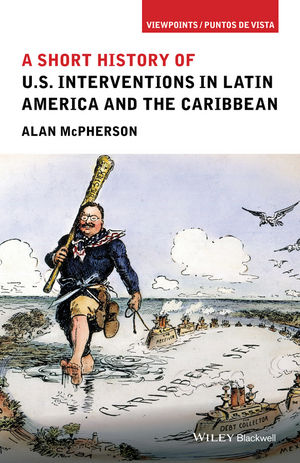 Alan McPherson, currently Professor of International and Area Studies, ConocoPhillips Petroleum Chair of Latin American Studies, and Director of the Center for the Americas at the University of Oklahoma, has written extensively about U.S./Latin American relations. He has authored two prize-winning monographs, The Invaded: How Latin Americans and their Allies Fought and Ended U.S. Occupations (Oxford University Press, 2014) and Yankee No! Anti-Americanism in U.S.-Latin American Relations (Harvard University Press, 2003), as well as several edited collections. In A Short History of U.S. Interventions, part of Wiley-Blackwell’s Viewpoints/Punto de Vista series, he analyses U.S. interventions in Latin America from the No Transfer resolution of 1811 through the present-day drug wars. McPherson argues that the foremost goal of U.S. policymakers was ‘political stability and political cultural change’ (4). Economic and other motivations certainly played a role, but he asserts that every intervention ‘harboured above all political motives’ (4).

McPherson’s definition of what does and what does not constitute an intervention is, as he notes, broad but not sprawling. His definition includes ‘all dispatches of large groups of U.S. armed forces by the U.S. government to territories in the Western Hemisphere south of the Rio Grande (now) separating the United States and Mexico and including (now) Florida. It also includes the use of armed non-U.S. citizens funded, trained, and equipped by the U.S. government’ (2). In addition, McPherson’s definition encompasses declared wars, illegal mobilisations, and interventions requested by Latin American and Caribbean heads of state. However, his definition does not consider either private U.S. forces intervening without government approval or non-military U.S. meddling as interventions. Thus, although he describes the filibustering expeditions of Narciso López and William Walker in the 1850s, he does not consider them interventions.

As one would expect, the ideas of U.S. policymakers appear frequently throughout this volume. McPherson does a good job illuminating the reasons why U.S. officials chose to intervene in Latin America. However, one of the strengths of this book is that, whenever possible, he discusses Latin American responses to U.S. interventions and thus does not focus exclusively on U.S. policymakers. Furthermore, he avoids creating facile dichotomies (i.e. the U.S. was always the brutish aggressor while Latin Americans were always passive victims). Rather, he emphasises how Latin American responses to U.S. interventions came in many forms. For instance, many Latin Americans – Pancho Villa or Augusto Sandino for instance – resisted the ‘Colossus of the North’. Other people, however, collaborated with U.S. forces out of a desire for material benefits or to strike at their political foes. Some people admired the United States and thought their countries could benefit from interventions. Finally, some Latin Americans accommodated U.S. forces in order to avoid trouble. McPherson ably discusses the many ways in which Latin Americans responded to interventions.

This volume offers an excellent survey of two centuries of interventions and covers many infamous episodes, including the U.S. War with Mexico; the bombardment of San Juan del Norte; U.S. interventions in Cuba, Nicaragua, and Haiti; the Punitive Expedition in Mexico; U.S. intervention in Guatemala in 1954 on behalf of the United Fruit Company; U.S. intervention in Grenada, and the ouster of Manuel Noriega in Panama. As he describes these episodes, McPherson also offers good description of important U.S. policies such as the Monroe Doctrine, the Roosevelt Corollary, Dollar Diplomacy, and the Good Neighbor Policy.

There are several points that the author might have considered at greater length. For one, he might have spent more time discussing interventions in the period between the bombardment of San Juan del Norte (1854) and the beginning of the Spanish-Cuban-American War (1898). He notes, ‘between 1869 and 1897, however, Washington sent warships into Latin American ports 5980 times’ (31). What did those interventions look like? While they may have been smaller-scale than the U.S. War with Mexico, it would have been helpful to consider the ways the U.S. intervened in Latin American affairs during the second half of the nineteenth century. In addition, he offers an excellent discussion of the many responses of Latin Americans to interventions, but he might have considered exploring, in greater depth, varied U.S. responses to interventions. Finally, there is very little discussion of South America in this volume. McPherson offers some ideas about the different relationship between the U.S. and South America. However, he could have spent additional time explaining why so many more interventions occurred in the Caribbean and Central America, rather than South America.

In sum, A Short History of U.S. Interventions is engaging, utilises primary sources judiciously, and will help students grasp the complex nature of U.S. interventions and Latin American responses. It will work well in survey courses and upper-level undergraduate seminars.