Cyborgs, Simians and San Francisco (part one) – Bodies and the American West

“Bodies become like cities” in LA and San Francisco, argues Antonia Mackay, as these places stretch the boundaries between American fantasy and reality. 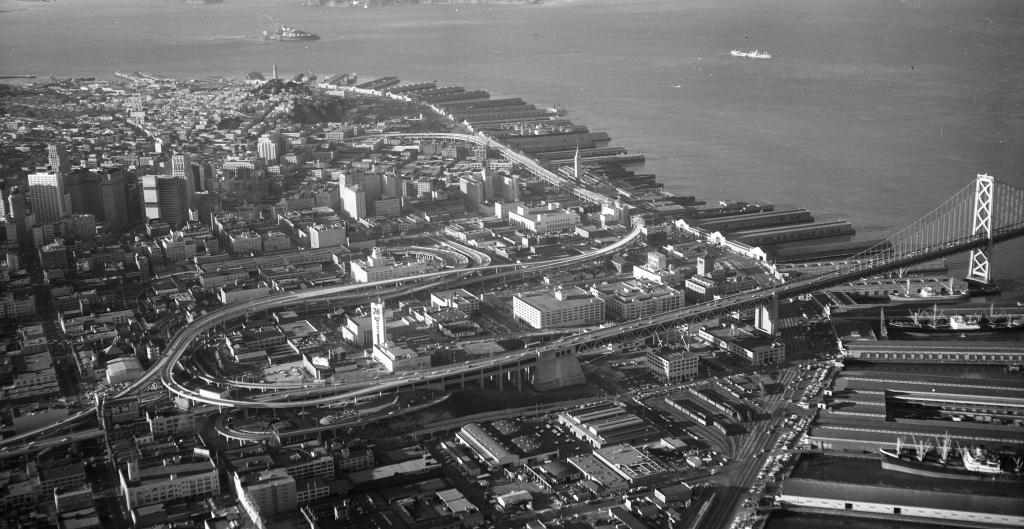 The Cold War was a period in American history and culture characterised by dualism and contradiction. It is a time tinged with nostalgia for suburbia, housewives, child-centric living, Hollywood, ‘togetherness’, Tupperware and television. This is the America of the mid twentieth century; driven and formed by various postwar booms – consumer, child and housing. It is a time of great political and social Conservatism, containment, moral familial values, wholesomeness – and yet, in both the culture and literature produced at the time, we find marginality, transgression and an escape from this typecast ‘America’. The culture of postwar America, being at once conformist and transgressive, seems so highly paradoxical leading to the question: with such multiplicities, how can selves be shaped or situated? How can we know ‘them’ from ‘us’?

The dual nature of American ‘containment’ culture extends throughout the history and political culture of the Cold War. This is a nation defined by consumerism and a need for stability, characterised by a governmental policy built upon nuclear threat and covert military action. The politics of the Cold War were clearly dictated by a need to control threats from abroad, in particular from the Soviet Union, but the interventions in Korea, Cuba and Vietnam also stand as testament to the unquestionable urgency the American nation felt for a contained nation, free from extremist political thought, ideologies and influence. The result was the formation of rigid parameters in the hope of excluding ‘them’ and preserving ‘us’, ensuring the dominance of American attitudes and beliefs, and a homogenous society and culture. This contained America of the postwar period is clearly one of dualism – a complex ideology based upon the need for authenticity of identity and, at the same time, the insistence on semblance and similarity. 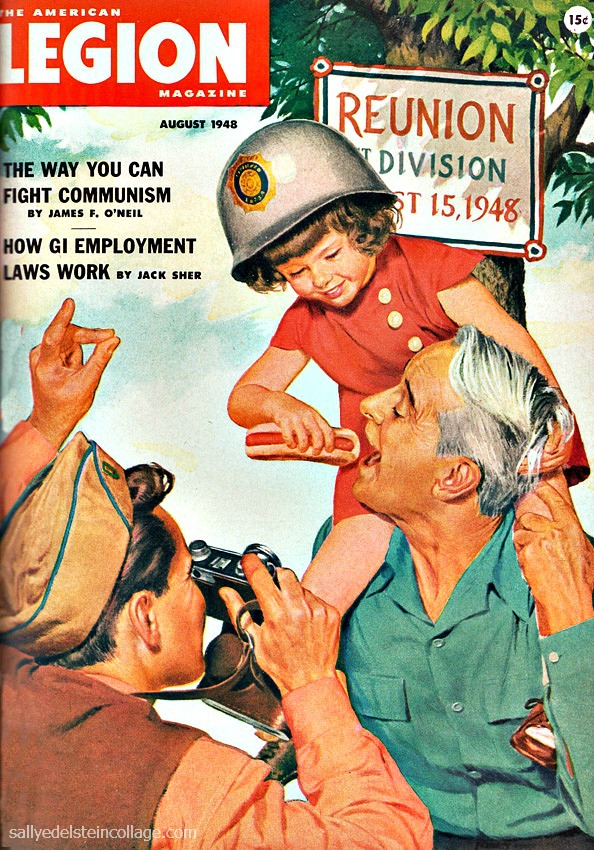 The American West (California, Nevada, Arizona, and Utah) emerges as an equally confused ideal – a space that seems  to uphold the utopian essence of American identity, but also suffers at the hands of hyperreality. The hyperreal can be understood as the moment divisions between reality and simulation are blurred. The American West emerges as the most chimerical of all postwar spaces for it is arguably both a space “changing, pluralistic and ambitious in signification” enveloping a mixture of “chaos, matrix or embryo” and can also sometimes be defined as “a line and sometimes a space”.[1] The result is an ambiguity between the real and the imagined Western region creating a variety of different ‘Wests’, fluctuating between the popular versions created by culture and the real, geographical spaces of the Western states of America. If bodies, according to the theories of Giles Deleuze and Elizabeth Grosz  mirror their environment, then the bodies, and hence, identities created in the American West are subject to unreliability – caught between these variegated ‘Wests’.[2] Ultimately then, when read according to spatial and body theory, the repeated shoring up of mythological, fantastical and dreamlike versions of Los Angeles and San Francisco results in the destabilising of a reliable ‘American’ identity for Western bodies in the literature, art, film and television produced during the mid century. Perhaps nowhere is more fitting of the fantastical than the home of Hollywood – Los Angeles.

Let’s take LA bodies for example. LA is a space that increasingly engaged in tales of unreality in the mid-century – of science fiction, aliens, abductions and invasions. Whilst alluding to Hollywood, the threat of invasion was not just the stuff of films as the House of Un-American Activities Committee made clear in the trials of, amongst others, Arthur Miller and Elia Kazan. Invasion from other parts of the US was also a key concern: by the late Fifties over half of the California population heralded from Canada and Europe and the majority of the remainder from Mexico.[3] “Alien invasion” was a very real issue for the American West. Thus LA is a space that produces issues and texts that engage directly with the ideology of the 1950s and 1960s – it is a place wholly consumed by the issue of communist threat and the “them and us” mentality. LA produced movies and texts which tell us repeatedly of the dangers of taking bodies and identity at face value – yet, this is also an artificial space by its very nature; a mythic space transformed by history into one of instability, inevitable change and negotiation. An area Neil Campbell calls, a ‘museum without walls’. Indeed, it is after all the West that houses Disneyland. 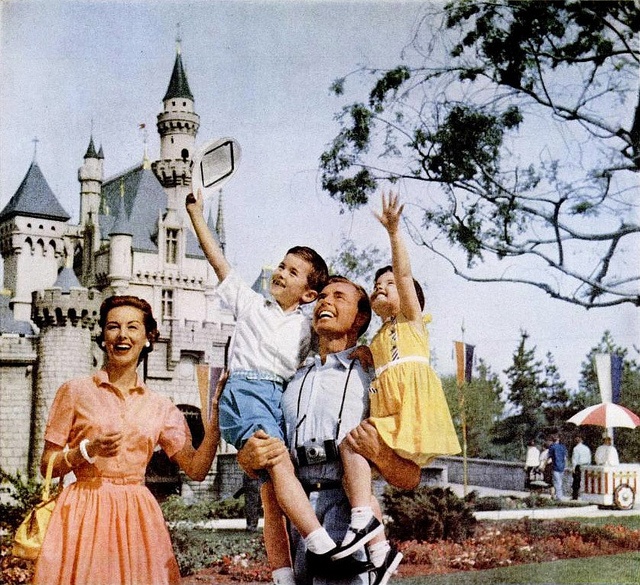 Disney movies promoted a distinctly ideologically contained postwar version of American idealism, and yet they also undermined this very image – at their heart often lies the unavoidable realisation of the movie’s constructedness and manufactured nature. Disney movies frequently shore up the insecurities of a postwar nation, as seen in the impurity of the Siamese cats in Lady and the Tramp (1955), the marginalisation of the ‘red Indian’ characters in Peter Pan (1953), the enforcement of women’s domestication  in Cinderella (1950) and Sleeping Beauty (1959), and the Orientalism in the characterisation of the wild animals in The Jungle Book (1967). Disney films themselves were clearly investing in Cold War ideologies, instilling the roles and types of acceptable identity  for men and women and upholding white America’s supremacy over foreign bodies.  Furthermore, by opening Disneyland in Anaheim California in 1955, the West becomes entrenched within the discourses of simulacra. As like most theme parks, Disneyland actively attempted to blur all spatial and temporal boundaries by eliminating time and the distinctions between past, present and future, hoping to “wall people off from the outside world” in a timeless land of fantasy.[4] This was therefore a space that actively encouraged the elimination of reality at a time when ‘realness’ was supposedly prized. Here, men, women and children could “escape their unnatural present day cares, drop their defenses and become more like themselves.”[5] Yet, this is not a form of escape in its entirety, for Disneyland could also evoke an element of the real such as national memories in Main Street USA, pioneers in Frontierland and scientific advances in Fantasyland. In short, this is a not a space of alienation, but rather an oddly homely one, where Americans could live in an American utopia for a day, a national, real and yet, hyperreal heterotopia.[6] For bodies, Disneyland clearly complicates the issue of authenticity, for whilst it relies heavily on Cold War ideologies and enforces these key concerns of consumerism, consumption, capitalism and conformity, it also stipulates the unreal nature of national citizenship and unlike the spaces immediately beyond the gates, nature in Disneyland is something to be reworked and transformed. As Jean Baudrillard writes, Disneyland lies at the heart of the American conscience, being “the social microcosm, the religious, miniaturised pleasure of real America”.[7] But if this is the case, then “Disneyland exists in order to hide that it is the real country, all of ‘real’ America that is Disneyland… [it] is presented as imaginary in order to make us believe that the rest is real”.[8] For Baudrillard, the park is a space which is simultaneously recognised as unreal and real, and if this is the perfect America, then it leaves open the possibility that lines of reality are blurred beyond recognition and there is no way we can negotiate real from the unreal. In effect, what was meant to be a space for escapism, the antidote to modern life, and American perfection, instilled further the necessity for the appearance and visibility of a unified American national identity and body, revealing its ultimate inadequacy.

The space of the new American West is therefore problematic – a sprawl of futuristic visions which offer fragmentation, identity crises and multiplicity – a somewhat removed notion from contained Cold War America. San Francisco in particular seems to encapsulate the idea of the West  as a space of commodification and hyperreality where simulation reproduces images that both conform and deny access to a sense of American ‘Western’ identity. San Francisco during the postwar era grew in size from its initial 506,676 in the 1930s to 740,316 by 1960, a boom attributed to the creation of the Sunset District, Visitacion Valley, and the total rebuild of the city through the aggressive freeway construction in the Bay Area and the sudden expansion of modern housing and superblocks at the hands of the mayor George Christopher and Justin Herman.[9] This reshaping of the city meant the radical rethinking of borders and cultures, and in turn, the reimagining of the body and its identity within such a space. As Edward Soja writes, new spaces such as San Francisco meant that “one’s own body and self is lost in the immense area that circumstances it abandoning its own identity to embrace the space beyond… it camouflages itself into the milieu of represented space – bodies become like cities”.[10]

These Western cities clearly conflate the already tense polarity between real and unreal, simulacra and original in ways which work to problematize the postwar ideology of containment. Both Los Angeles and San Francisco are spaces which can shape identity, and yet, both seem to straddle the divide between fantasy and reality. Perhaps, it is therefore unsurprising that these freeways, super housing complexes, new boroughs and communities, should house the world of cyborgs in Philip K Dick’s Do Androids Dream of Electric Sheep  – a space that is itself founded on the myth of an alternative society and a city already characterised by historical otherness, change and flux.

[9] Chester Hartment, City for Sale: The Transformation of San Francisco.

“Money, That’s What I Want”: Who Benefitted from the Crossover of African American Musicians in the ...
Book Review: 'Who Rules the World?', by Noam Chomsky
Assassination Nation, Young Female Anger and Futurity in the Wake of Trump’s America
Emily Dickinson and the Nineteenth-Century Women Poets: The Poetics and Politics of Reticence
Conference Review: IAAS Postgraduate Conference
Application Advice: BAAS Postgraduate Travel Award
Review: ANZASA Conference (Part Two)
Review: Seventeenth Annual Conference of the Scottish Association for the Study of America

After receiving her English degree, Antonia worked as a fashion journalist before returning to academia, where she completed an MA and PhD in American Literature. Since 2011 she has been an Associate Lecturer at Oxford Brookes University as well as a lecturer at Goldsmiths, University of London. In recent months Antonia received the teaching award at Oxford Brookes and is currently working on her first book - a monograph of her thesis on Cold War spaces and identity.
View all posts by Antonia Mackay →
Tagged  C20, Cold War, Cultural History, Television, The Suburbs, Whiteness.
Bookmark the permalink.