Blogs on Togs: Dress History Research in an Overseas Archive

This blog series was produced through a collaboration between the Society for the History of Women in the Americas (SHAW) and U.S. Studies Online. The six posts showcase the diversity of research and differing experiences of scholars who are based in the UK but work on women in the US. The contributors also highlight the challenges facing academics (both those researching transnationally and more generally) as well as the valuable insights that continues to emerge from this cross-disciplinary field.

The series opens with Alison Goodrum’s discussion of visiting the designer Elizabeth Hawes’ archives in New York. Professor Goodrum explores the challenges and joys of both using overseas archives and starting a blog about her research trip.

For the historian, tempus fugit rings particularly true in those precious – often all too short – moments snatched and savoured at an archive or in a museum collection.   Such visits may be thought of as the source of scholarly, and even spiritual, succour: reaching the parts that other academic life can’t (to misquote the slogan).  In short, archive visits are to be much-anticipated, optimised and relished.  The planning process, then, looms large for the archive researcher.  But it rears up still greater when carrying out a project offshore simply by virtue of geography, distances and logistics.  The odds on a return visit at some later date are improbable to rare, so, carpe diem (if that’s not one Latin motto too many) is a firm principle when overseas at a far flung collection. 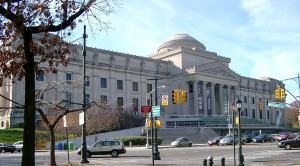 As a dress historian and fashion theorist, one of my recent projects looked at the life and work of the designer, writer and activist, Elizabeth Hawes (1903-1971), now little known but once a lynchpin of the interwar New York garment industry.  My research, supported through a three month-long visiting fellowship at the Bard Graduate Center, transported me some three thousand miles from campus in central Manchester to the bright lights of New York City, and the archives of Brooklyn Museum in particular, from November 2013 to January 2014.

Happily for the dress historian, Elizabeth Hawes, my obsession and heroine, was an avid self-archivist and prolific in her designing and writing.  She left a substantial trail of artefacts, manuscripts and commercial records in her wake, all be they somewhat muddle-some in logic and meaning.  My task was to untangle some of her scribbles and sketches and to begin to make sense of their social significance.   Hawes was a contrary character and not averse to making controversial waves through her politicised (left of centre) clothes, literature and actions.  For example, the ‘flag dress’, was among her final tranche of design work, sketched just prior to the entry of the United States into World War Two.  The dress comprised a sweeping, full skirted, floor length gown, covered in a patchwork of international flags, with those of Italy and Japan sited strategically on the backside of the intended wearer. 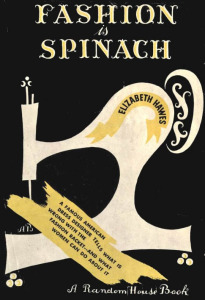 Hawes, too, was combative in the best known of her books, a humorous, but nonetheless stinging, exposé of modern fashion titled Fashion Is Spinach (1938).  In this 300-page work she considered fashion to be ‘a parasite’ and ‘a deformed thief’ and the fashion industry (of which she was a part) to be ‘a racket’, swindling women with poorly made clothes and a constant pressure to purchase the newest thing.  It was, then, a curious but none the less compelling position that she inhabited as simultaneously both industry leader and critic.

As with any of the larger, busy, resource-constrained archives the world over, permission to view, and use, the rich, and rare, holdings on Elizabeth Hawes at Brooklyn Museum was not a given but a privilege granted.  Requests from visiting scholars are a dime a dozen (to use the vernacular) and it is necessary to make a strong case for a visit several weeks in advance.  This application process, which may require a CV in order to judge one’s credentials, is best viewed as a tool, rather than a chore, by the researcher making the request.  If nothing else, it forces some useful decision-making and project management prior to the trip itself.  For example, what will be the precise dates and times of the visit (just like hospital visiting, usually there are prescribed, restricted, hours)?  What exactly is to be consulted (accession and call numbers are necessary identification details)?  Defining the specifics is important for all parties involved in the process, both the visitor and the host, in order to be efficient and effective.

Getting ‘stuck in’ to some archives always makes me feel a) happy b) as though I’m actually achieving something, and c) as if I am a ‘real’ researcher.  I find the orderliness, the solitude, the purposefulness, the seriousness of archives pleasing.  And the strict use of graphite pencils transports me back to school days. There is something comfortingly ritualistic about the choreographed performance of a researcher’s pilgrimage to an archive.  The metaphor of ritual is an interesting one.  On arrival, the artefacts have been placed, with due reverence, for consultation. There is an aura around these items, each packed with care, each recorded with precision, each considered special.  But don’t be fooled by all the hushed loveliness of the rarefied setting or the one-of-a-kind objects on display.  Archive work can be hard on both brain and brawn.  I came away from my multiple visits to Brooklyn with eyes boggled by tiny, fading, newsprint and my mind contorted by the dizzying volume of the holdings laid out before me.  Standing on my feet for five solid hours at a book cradle required stamina, no matter how bewitching the content of Hawes’s original sketchbooks. 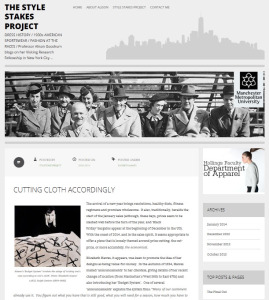 My overseas adventure in NYC also opened up fresh challenges and the opportunity to acquire new skills, notably with my first foray into the uncharted world of blogging and the alien terrain of a ‘wordpress’ account.  I may have been well versed in utilising museum archives but when it came to the bIogosphere I was no more than a faltering novice.   I embarked on the exercise of setting up, authoring and maintaining a blog (titled ‘The Style Stakes’) with some trepidation (read, ‘reluctance’).  There was a crisis of confidence: could I figure out how to ‘do’ it?  And crises of content: would I really have anything to say?  But in a flash, I was posting like an old pro.  Indeed, I was eulogistic about both my new found wizardry (blogging was easy peasy) and the benefits that a web presence brought forth (why hadn’t I taken the plunge before?).

Along with keeping my followers (yes, I was followed) up to date with my latest activities and bridging the miles between New York and colleagues ‘back home’ in Manchester, blogging was a boon for a whole number of reasons: it allowed me to ‘empty my head’ of ideas and develop them into cogent text; it was a great short cut when making introductions about who I was and what I was doing (a URL to an ‘about me’ page can be pasted into an email in a trice); it became a useful record of my thinking, to which I continue to refer; it allowed me to approach and package my work in a different way, writing in a different style for a different audience; it became a good shop window and attracted unsolicited interest in my work from organisations beyond my usual orbit (including an overture from The New York Times, no less).  And, even more to my surprise, it was fun to do, too.  Time, then, for some more Latin?  veni, vidi, vici!

The Southern Student Organizing Committee and the White New Left
“FACTS TAKE A BACKSEAT TO MYTHS” – BREXIT FROM AN AMERICAN PERSPECTIVE. An Interview with Leif Johan...
Teaching U.S Women’s History in British Universities: a Personal and Political History
Latinos and the Language Question: Arizona, 1967-70
My Research across Borders: Lonneke Geerlings
‘Homo Abominum Americana’: The cultural tradition of the vampire in Snyder and Albuquerque’s America...
Drama and Cinematic Adaptation: USSO Special Series
From Harlem to Texas: African American Art and the Murals of Aaron Douglas

Alison L Goodrum is professor in the department of apparel at Manchester Metropolitan University. Her blog, The Style Stakes, can be accessed at: http://stylestakesproject.wordpress.com/
View all posts by Alison Goodrum →
Tagged  C20, Cultural History, Gender and Sexuality.
Bookmark the permalink.