This article is adapted from the keynote presentation given at BAAS Postgraduate Symposium, 4th December 2021.

The ‘Black Girl Magic’ movement is an opportunity both to celebrate what is means to be a Black woman and also challenge the oppressional practices and contemporary issues that affect them and their community. In her 2016 speech at Essence Festival, American filmmaker Ava DuVernay stated that “Black Girl Magic is a rallying call of recognition” and suggested that “embedded in the everyday is a magnificence that is so easy to miss because we’re so mired in the struggle and what society says we are”.[i] Black Girl Magic has created the opportunity to celebrate the heritage and achievements of Black women that are often ignored or rendered invisible within wider Western society. 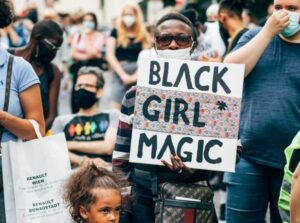 “Black Lives Matter protest – black woman with her child is hoding Black Girl Magic sign” by Ivan Radic is marked with CC BY 2.0.

The movement first began on social media in 2013 when Twitter user CaShawn Thompson tweeted that “black girls are magic”. The phrase was soon shortened into the hashtag ‘Black Girl Magic’ and has become a visible and accessible way of celebrating Black women, their culture and heritage. Black Girl Magic is being embraced by popular culture, interconnected social movements and wider society as an inclusive and intersectional movement, which acknowledges multiple categories of oppression and aspects of identity.

Black Girl Magic builds on a rich history of African American social action and movements, using contemporary methods of activism and of community building. In the 1970s, the Combahee River Collective began examining the interlocking systems of oppression that Black women face, theorising ideas that would go on to become a key concept of intersectionality. Most importantly, the collective used these theories to inform and shape their political and social activities. Black Girl Magic incorporates similar strategies and beliefs, such as the concept of interlocking oppression and participation in coalitions with other minority groups or social movements to oppose issues within their shared community. Furthermore, the Black Girl Magic movement also  follows in the footsteps of movements and ideologies such as the civil rights movement, Négritude, Black feminism, and most recently, Black Lives Matter.

Black Girl Magic is present throughout multiple genres and forms of popular culture. These celebratory and nuanced representations have the ability to inspire, empower and mobilise their audiences, both in the way that they make their audiences feel and the opportunities that they present to them. African American creatives have long embraced the speculative genre as something that can be used to examine and represent ideas of race, oppression, and society, as well as an opportunity to celebrate Black culture and ideas of Blackness itself.

In The Chilling Adventures of Sabrina, the character of Prudence is first introduced as fitting into the typical ‘mean girl’ archetype often seen in teen dramas, and also seems to be an example of the ‘Angry Black Woman’ stereotype. However, as her childhood trauma and the realities of her existence are slowly revealed to both Sabrina and the audience, we learn that she is actually forced into the role of the ‘Strong Black Woman’ by witching society, making her character relatable to the real-life experiences of African American women and the way that they are both viewed and treated within wider society.

Narratives such as The Chilling Adventures of Sabrina provide the opportunity for discussing the issues and discourses that are important to Black women. Audiences are able to use these representations as catalysts and prompts to share their opinions with others and create opportunities to come together, based off of shared experiences, beliefs and viewpoints. This is happening online, but also in person, at book groups, film clubs and comic cons. As well as discussing how these portrayals are empowering and positive, the community created by Black Girl Magic also gives the opportunity to discuss prominent representational issues, such as reskinning, colourism and tokenism.

In 1992, bell hooks stated that “for some time now the critical challenge for black folks has been to expand the discussion of race and representation beyond debates about good and bad imagery. Often what is thought to be good is merely a reaction against representations created by white people that were blatantly stereotypical”.[ii] hooks’ critique of black representation still rings true, as academics, fans and activists call for representation that doesn’t just cast token black characters or lighter skin actresses considered more palatable to a majority white audience. 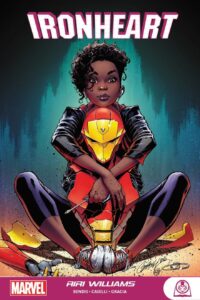 Furthermore, Marvel’s creation of the character Riri Williams, also known by the moniker Ironheart, allows us to examine the increasingly commonplace representational practice of ‘Reskinning’ within American syndicated comic books.[iii] Rather than create an original superhero, Riri is created and given Ironman’s niche, suit and powerset, allowing the company to profit off an established and marketable asset and also claim that their line-up is inclusive without hiring minority writers, artists or creatives in the process. What’s more, none of the writers or artists involved in the creation of the Ironheart series were Black or female, a creative exclusion which leads us to question this series’ role within Marvel’s line up, and whether financial gain and marketability is being prioritised over authentic and impactful representations of Blackness and Black girlhood.

These kinds of representations, as well as their effect and origins, have been discussed and challenged as part of the Black Girl Magic movement. However, Black Girl Magic also gives us the opportunity to celebrate what these representations do get right, the progress they’re making and the positive effect that they’re having in their reader and audience’s lives.

These representations are also comparable to the Black Girl Magic movement in their ability to mobilise their audiences, inspire activism and influence social change. Aria S. Halliday & Nadia E. Brown theorise that Black women’s political participation and empowerment over the last ten years or so can be split into three major ideas: that “Black women use their particular lived experiences to facilitate political organizing, Black women create and maintain political empowerment through community, and that Black women have used the rise of social media to rouse political activism through digital communities”.[iv]

The Black Girl Magic movement utilises all three of these methods that create community and mobilise political or social action. Hester Baer states that digital activism thrives off an “interplay of individual stories and collective modalities”, something that we can see in the relationship between Black Girl Magic and the communities that are formed by a shared consumption of speculative fiction and engagement with the wider societal issues and discourses that are made visible by such texts and experienced within everyday life.[v]

Furthermore, Black Girl Magic is so much more than simply ‘Hashtag Activism’, as these conversations and posts are actions of sharing, mobilisation and community formation, not just performative as some  critics might suggest.[vi] Online contributions to the Black Girl Magic movement, as well as the popular culture which embodies and reflects it, lead to widespread discussion and engagement, which in turn catalyses further action and collaboration.

Black Girl Magic, both as a social and artistic movement, is contributing to the development of an international community of Black women. It is inspiring African American women to participate in activism, whether digitally or in person in protests or rallies. It is empowering audiences to make a space for themselves in wider societal discourses and make visible the multiplicity and intersectionality of what it means to be a Black woman. We are not all a monolith, and this is something to be admired and celebrated.

Review: ‘Collaboration in America and Collaborative Work in American Studies’
1919: the Boston Molasses Flood and the Year of Violence and Disillusion
Review: BrANCA Reading Group: "Hope/Pessimism"
Merging aesthetics and politics: Toni Morrison’s jazz affect in JAZZ (1992)
War Among All Puerto Ricans: The Nationalist Revolt and the Creation of the Estado Libre Asociado of...
MAGA, White Evangelicals, and the Objection to Kamala Harris
Conference Review: 'Protest: Resistance and Dissent in America'
60 Seconds With Sue Currell

Riziki Millanzi (she/her) is a doctoral researcher at the University of Sussex, England. Her thesis is entitled 'Black Women and 'Black Girl Magic' in Speculative Fiction: Intersectional Protest and Celebration'. Riziki's research examines the representation of Black women in a range of speculative literature, comics, television, and film. You can follow her on Twitter at @itsriziki
View all posts by Riziki Millanzi →
Tagged  African American Culture, Black History, Contemporary Fiction, Visual Culture.
Bookmark the permalink.