At this one-day training session students from across the UK were introduced to the wealth of North American resources held by the British Library. The event itself was held at the Boston Spa branch, but the information provided also related to the larger site at St. Pancreas in London. The course was expertly lead by Dr Francisca Fuentes, curator of the North American published collection, and Dr Cara Rodway, acting director of the Eccles Centre for American Studies. Participants spanned all levels of academic study, from undergraduates, to MA, to doctoral researchers. They also crossed a range of disciplines within American Studies including history, literature, and even musical theatre. This gave an eclectic and cross-disciplinary dynamic to the session. The overall aim of the day was focused on providing researchers with the skills to search for, locate, and attend to the resources offered by the British Library, in the format of primary and secondary sources such as newspapers, magazines, poetry, and sound archives.

The day was split into three parts, each seeking to prepare for the next, so that we as researchers could start to build up some knowledge of how to access this vast and sprawling collection. A couple of things were highlighted from the outset. The first was the sheer size of the British Library’s collection, which is the largest outside of the US. There is a new reading room at Boston Spa to which papers can be pre-ordered. If they are requested further afield, they then enter an exceptionally well-organised system of location and lorry transportation, which became clearer later in the day. Several warehouses surrounded the presentation room, holding row upon row of materials, some of which are also held underground. This visual framing of scale became the foundation for understanding this collection. It gave a sense of the complexity and possibility inherent in such a large and varied bank of interdisciplinary resources. With this exciting premise, Fuentes and Rodway demonstrated the catalogue system, showing how different materials can be ordered. Particularly useful here was the “My Workspace” area in which readers can keep a record of any items they find that might be of interest and queue them all in one personal database on the BL website. Organising research in this way is pertinent to maximising visits to the library. The practical reality of course, is that the best away to familiarise students with searching through the catalogue – using keywords, authors, and regional tags – is for them to actually use it. Perhaps this was something that could have been organised by the use of personal laptops during the sessions throughout the day as an interactive tool. Nonetheless, being introduced to particulars in the collection, including some of Sylvia Plath’s original poetry manuscripts, stirred a sort of fundamental thrill for the love of a subject. The library has the capacity to let readers touch, hear, even smell the originality of those first inspirations that later turn into research. That sort of interactivity overshadowed any lack of its use in the course itself. 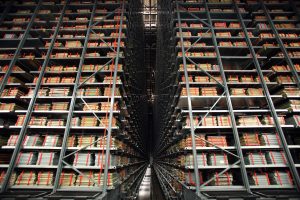 The storage void of the British Library National Newspaper Building at Boston Spa in West Yorkshire.

After lunch, Rodway provided a more detailed insight into the newspaper collections. In the digital age some of the tactile resources are neglected, and it’s important to note that not all of the collection is digitised. Scholars are wanted, even needed, to delve physically into potentially unused materials. Rodway slipped in stories of dusty newspaper stock, covered with rubble from the warehouse roof between more practical details about the importance of still engaging with microfilm. Her cry of “Go Analogue” was a refreshing reminder of the action and investigation that should accompany more static forms of digital scholarship. Holding a newspaper and seeing the colours of the print, the thickness of the paper, and the advertisements surrounding the text, helps to build a fuller context for more specific research. Part of scholars’ jobs in the future is not only to progress into the expanse of the digital age, but to remain and persist in the importance of original documents. Without this, research fails to do justice to the lived reality of its author and readership.

It seemed appropriate, then, that the building tour showed how both analogue and digital are working side by side to promote and enhance each other. In the scanning room upstairs a team worked away turning pages and pressing buttons to lift huge glass plates. The team digitises different materials, including books, newspapers, and visual sources, with incredible accuracy and precision to ensure that images have minimal pixelation. In another building seen from a viewing platform, deep and tall rows of books are kept until a reader calls them. When they are requested “robots” swoop down the isles to collect and deliver the material to a conveyor. Perhaps one of the most advancing, if not a little frightening, statistics from the day was that these machines hold full knowledge of the location of stock, without any human knowledge to back that data up. This sort of reliance can cause serious delays if a machine breaks down. However, it does mean that such a huge collection can be made gradually more accessible to the reading public. Technology then, is still a necessity in the process of using analogue. This is fragile a symbiosis that might be best maintained through equal balance. 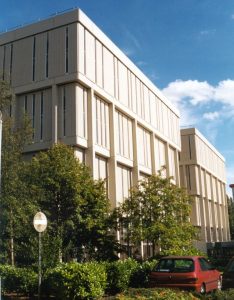 The Boston Spa branch of the British Library

For the final part of the day a number of case studies demonstrated how the library might be used for more discrete projects. Mark Eastwood (University of Nottingham), presented how he used his time as a fellow of the library. He introduced the astonishing amount of government documents that are available from databases including the Digital National Security Archive, the Foreign Broadcast Information Centre, and physical resources including Presidential Papers. These more focused approaches were important to an audience who have not yet necessarily fully developed, or even located, a specific area of interest within American Studies. The information given on fellowships and examples of creative writers who have used the archives for their semi-fictional writings were another point of encouragement for a room of engaged and early-stage students.

The day formed a sort of whistle-stop tour of a public institution that wants to be used. The organisers were more than forthcoming about the importance of human resources in finding material. For all the database searches possible, the subject librarians themselves have decades of experience and indispensable knowledge which they want to disseminate more widely. Like the promotion of analogue, the human face becomes a mascot for remembering how scholarship must seek to maintain a contact with material reality, as it then gains capacity to enrich both academic and public spheres. One thing that might be taken from this, in the age of research “impact”, is that future scholars should use and recall this collection in a way that constantly reveals it to spheres not limited to academic areas, but also to the thinking and diverse general public.

Lucy is a first year WRoCAH PhD candidate the the University of Leeds. My work in the School of English explores the poetry of Donald Hall and how American history is written through poetic texts. She competed her undergraduate degree in English literature at the University of Glasgow, and her M.Phil at Trinity College Dublin in Literatures of the Americas. Her previous research has included representations of grief in New England literary history, and the editorial relations of Raymond Carver.
View all posts by Lucy Cheseldine →
Tagged  American Studies, Archives, British Library, Digitisation, Research, Technology.
Bookmark the permalink.