The British Group of Early American Historians (BGEAH) was founded in 1996 and holds an annual conference bringing together academics in the field of early American history. The theme for this year’s conference was ‘Land and Water: Port Towns, maritime connections, and oceanic spaces of the early modern Atlantic World.’ The panels explored a range of subthemes, including: networks of trust and emotion, trading moralities, port town economies and governance, the relationship between mapping and knowledge, and perspectives on the material culture of land and water. 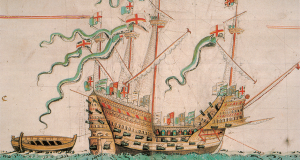 The difficulties of monitoring illicit activities and enforcing controls across vast distances was a theme in a number of presentations across different panels. Katherine Smoak (Johns Hopkins University) discussed how the variety and limited circulation of colonial paper monies made it difficult for local colonists to distinguish between valid and counterfeit tender, while Dr Bram Hoonhout (Leiden University) examined the interaction between legal and illegal trade in the Dutch West Indies. He demonstrated how we can achieve some insights into the extent of smuggling by examining Port Books of other colonial powers in the region, where illicit trading commodities became accepted. Dr Johan Joor (Huygens Institute) analysed the methods by which Dutch fishing networks circumvented the blockade during the Napoleonic Wars by transmitting information and letters. He shared how fishermen used a variety of tactics including double-soled shoes, advertisements in London, and secret meetings in brothels. These papers highlight how restricted knowledge and goods circumvented boundaries to serve the demand for their consumption, and in the process were legitimised.

The conference also demonstrated a variety of innovative methodologies and new sources, employed in the research presentations, including the network narrative, maps and digitised manuscripts. Dr Sheryllynne Haggerty (University of Nottingham) presented a new methodological approach of the network narrative, which refers to the discourse regarding actors and the actions between them. She illustrated the application of the network narrative through the case of Joshua Johnson, an Annapolis merchant in London. Network narrative analysis allows for ‘big data’ to be interpreted in a useful and meaningful way by mapping trends and patterns in the frequency and subject of interactions between actors. Nathaniel Holly (College of William and Mary), analysed Native American maps to explore the Cherokee perspective of the power relations in port towns. These maps represented social connections rather than geographical features and included urban centres like Charleston as unfamiliar but adopted places. A panel of papers offered insights from the Georgian Papers Programme, which is digitising all historic manuscripts from the Georgian period. Three of the programme’s Fellows presented their research findings covering diverse topics; including natural disasters and statecraft, Prince William Henry’s role in George III’s intelligence network, and George III’s agricultural experiments as a model for the nation.

The first keynote address by Professor Geoffrey Plank (University of East Anglia) argued for a history of the Atlantic World beginning in the far North Atlantic, discussing the importance of warfare in the creation of the Atlantic World. He considered the use of starvation as a tactic of violence through the examples of Norway exploiting Iceland’s fisheries and the English pushing Native Americans into less fertile lands. He also drew attention to the use of canoes as vessels of warfare that at times gave the Native Americans the advantage in maritime combat through their greater knowledge of the local landscape. 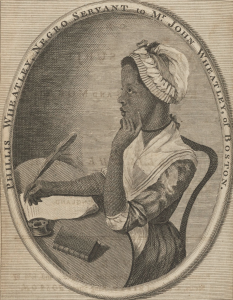 In the second keynote address, Professor Mark A. Peterson (University of California Berkeley) presented chapters from his forthcoming book, The City-State of Boston: A Tragedy in Three Acts, 1630-1865 (Yale University Press). Peterson argued that Boston was far from the ‘City on the Hill’ of myth and was complicit in the slave trade through its commercial connections with the West Indies. Indeed, as many as one in five Boston households owned a slave in the 1690s, and man-stealing was treated as a crime that could not be justified by Christian conversion. He discussed the religious and moral poems of the African-American writer, Phillis Wheatley, who formed her own notions of liberty and viewed her master as God. Peterson’s new book promises a multi-layered rethinking of the history of Boston far away from a unified founding myth. 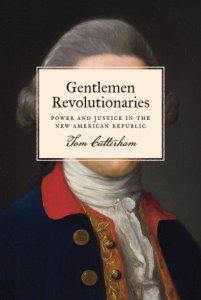 This year’s Book Club was led by Dr Tom Cutterham (University of Birmingham) who introduced his new book, Gentlemen Revolutionaries: Power and Justice in the New American Republic (Princeton University Press, 2017). Cutterham argued that ideas of masculine gentility were redefined in the new American Republic. He discussed how traditional forms of hierarchy centred on deference and allegiance were replaced with a structure of power relations based on property and contractual rights. He explained how identity and emotion played important roles in the processes of class struggle and class formation.

In conclusion, this year’s BGEAH conference covered a broad range of maritime connections with port towns being central to the interchange between land and water. A variety of approaches drawn from social, cultural and economic history, all contributed to the understandings of the conference theme. The keynote addresses offered wider perspectives on the framing of Atlantic History, from the early western European explorations to the foundation of city-states and the new American Republic. The diversity of contributions, from warfare to agricultural experiments, demonstrates the richness of this topic for further study. 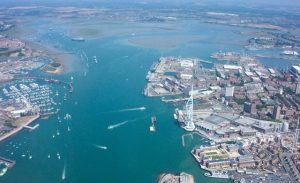 Portsmouth was an ideal city to hold a conference on the theme of port towns with its rich maritime history. The Roanoke colonists set sail from Portsmouth in 1587, and it has been a base for the navy since the early modern period. The conference included a unique opportunity for a private tour of the Mary Rose Museum, which included a fascinating view of the recently conserved Mary Rose ship and a beautiful outlook over the Portsmouth harbour at sunset. Dr Thomas Rodgers (University of Portsmouth) did an excellent job organising the conference, and it was a very successful event.

Katrina Maydom is a PhD candidate in the Department of History and Philosophy of Science at the University of Cambridge. Her doctorate is funded by the Wellcome Trust. Her thesis examines the production, trade and consumption of New World drugs in the early English empire.
View all posts by Katrina Maydom →
Tagged  British Group of Early American Historians, Early American History, Maritime History, Transatlantic Culture, Transatlantic Trade.
Bookmark the permalink.