Home » Reviews » Conference reviews » Review: Bellows and the Body: the Real, the Ideal and the Nude

Review: Bellows and the Body: the Real, the Ideal and the Nude

‘Bellows and the Body: the Real, the Ideal and the Nude’, The Barber Institute of Fine Arts, 3- 4 November 2016

Inspired by and focused on the George Bellows collection—recently acquired by the Barber Institute—this symposium brought together international academics to discuss art and culture of Bellows’ America. Bellows was arguably one of the most acclaimed American artists of his generation and the most prominent member of the Ashcan School. It was fitting, then, that the  two-day event began with an evening lecture from Professor David Peters Corbett (UEA and Courtauld Institute), ‘George Bellows and the Urban Scene’. Presenting the relationship between the artists of the Ashcan School and New York City, the lecture served as an appropriate introduction. Corbett noted Bellows’ interest in human life and interactions as exemplified in Stag at Sharkey’s (1909), where he highlights human vulnerability as well as the brutality of life. 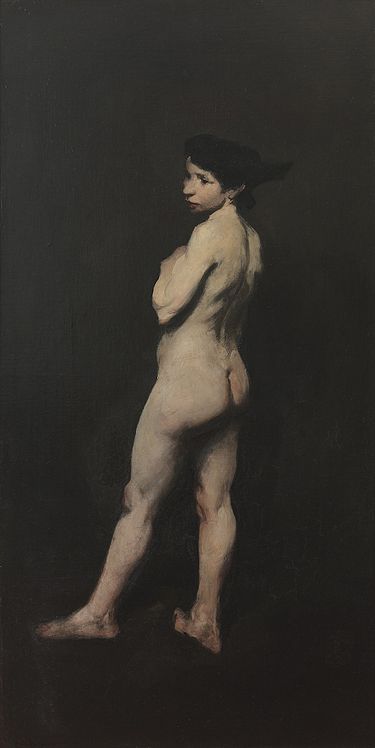 Brutality was also noted by Dr John Fagg (University of Birmingham) in his paper ‘George Bellows’ Body’. Miss Bentham (1906) depicts a poor, malnourished immigrant from Durham with red marks on her skin that define her belonging to the working class. Her abused body emphasise the brutal physical effect of the city. She fits with the characteristic Ashcan School themes and features; depicting immigration, hardship, and suffering. Fagg argued that Miss Bentham is an unconventional nude, not only because she is not sexualised but also because of the perspective from which she is portrayed. The model is not posing on a stand and Bellows important physical presence gives him another perspective that is reflected on canvas. Arguably the subject’s non-centred position in the canvas can cause a sense of awkwardness for the viewer, which could relate to Bellows’ unease with his own body.

Referring also to awkwardness of the body, and to Miss Bentham, Professor Amy Werbel (State University of New York) illustrated the different challenges faced by artists showing the naked body in American art from the 1800s onwards. Several American artists had seen their nudes burn, given puritanical views on nudity which equated it with indecency. She argued that an American pioneer in this matter was Thomas Eakins, who tried to defeat this stigma with his painting William Rush carving his allegorical figure of the Schuylkill River (1908). The painting’s title is self-explanatory, yet despite the artistic nature of the nude it was scandalous among his non-artistic contemporaries. Ranging in discussion from Henri to Anthony Comstock, Werbel illustrated the history of nude in American art, the laws and the restrictions faced, and the will of artists to achieve European levels of freedom of expression.

The symposium then explored the relationship between the body and the city’s building in more depth by Adam Greenhalgh (National Gallery of Art, Washington) in his paper ‘Body/Building: New York City around 1910’. Presenting Manhattan as a living body, Greenhalgh provided an interpretation of Excavation at Night (1908) as an autopsy of the city, conveying a powerful image of the city being exposed and vulnerable like Miss Bentham. Greenhalgh further analysed, River Rats (1906) and Forty-two Kids (1907) as an example of the city seen as a living body. The children depicted in these works belong to the immigrant working class, described by contemporaries as insects, germs, vermin, spider limbs, constructed as diseases that invade and contaminate the body of the city. 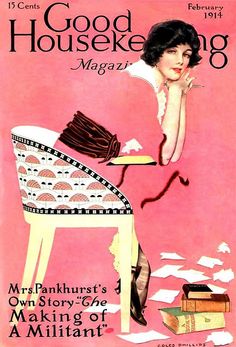 From the macabre description of New York and some of his inhabitants, the symposium proceeded to question the female body in commercial art with Professor Jennifer Greenhill (University of Southern California) exploring ‘Commercial Illustration’s Immaterial Bodies’. The paper focused on the commercial artist Coles Phillips and commercial underpinnings of imagery for the mass press. It was illuminating to discover this artist and some of his most characteristic works, created with a fade-away technique where the body of women disappears in the background so dematerialising their bodies. Greenhill provided an excellent overview of the artist and his technique, displaying numerous eye-catching images that remain powerful in terms of graphic and design. Coles Phillips’ pictorial technique focused on the background to capture the viewer’s attention with its design and patterns, while the static faces of the women function as a frame to the illusion of movement in their bodies and textiles. He was a pioneer in graphic design, as demonstrated in the illusion of movement created with abstract patterns that catch the attention of the magazine’s reader.

From fashion magazines to the magazine that started John Sloan’s career; The Masses (1911-1917). Dr Rachel Sanders (Oxford Brookes University) presented ‘How does that help with the working classes?: Nudity and feminism in the Masses’, introducing the history of this important magazine for the Ashcan School as well as the story of women depicted in it, focusing on feminism and socialism. The Masses began as a magazine devoted to depicting the struggles of the working class, seen as an organised rebellion for the people and an attempt to offer support and solutions to local issues. Nudity, a topic that fell in the art category for The Masses, was an issue that needed addressing. It was seen as essential to art since it represented women’s sexual and mental liberation and emancipation.

The symposium concluded with a Roundtable Discussion which saw Christopher Riopelle (National Gallery, London), Katherine Bourguignon (Terra Foundation for American Art), Frances Fowle (University of Edinburgh) and Nicola Kaminsky (Barber Institute of Fine Arts) presenting the challenges faced by curators when presenting American art into their museums and exhibitions. Nicola Kaminsky, presenting for Christopher Riopelle, focused on Thomas Cole, an English landscape painter who migrated to the United States, bringing English Romanticism to the new continent and contributing to the dramatic landscape painting of 1800s America. His paper also mentions the very important acquisition of Men of the Docks (1912) by Bellows, acquisition that brought the Ashcan School to Europe on a permanent basis. 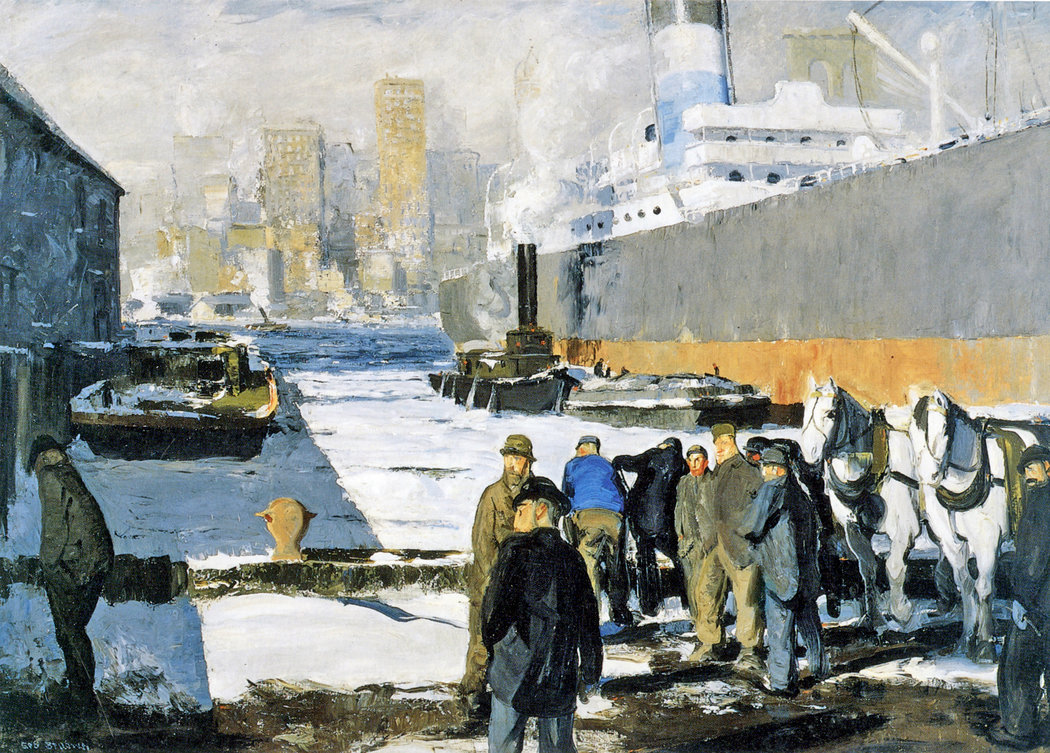 The session continued with Katherine Bourguignon (Terra Foundation for American Art), who discussed the challenges of exhibiting American art in Europe. The aim of the Terra Foundation is to connect people worldwide with American art by organising exhibitions in museums such as the Louvre. The Scottish National Gallery represented by its curator Frances Fowle (University of Edinburgh) have followed suit with the exhibition ‘American Impressionism: a new vision’, July 19th – October 19th 2014 at the Scottish National Gallery of Modern Art, the Giverny Museum of Impressionism, and the Museo Thyssen-Bornemisza in Madrid, succeeding in engaging European visitors with the unfamiliar American Artists.

To conclude the session and the day of papers and presentations, Nicola Kaminsky (Barber Institute of Fine Arts) revealed the process behind the purchase of Miss Bentham by the Barber Institute in the same year of the acquisition of the Men of the Docks by the National Gallery of London. Miss Bentham, the subject of the symposium, appeared on the art market in 2014, the property of Andy Warhol until his death, the painting had rarely been publicly exhibited. Nicola Kaminsky, under the advice of Prof Corbett and Dr Fagg, acquired her for £2.75 million for the Barber Institute. The director of the Barber Institute also announced that there will be a modest additional acquisition to complete and provide context to the Bellows. The event brought together discussion of Bellows and his work with more practical aspects of curation and acquisition, providing a fascinating insight into the value and importance of the collection. For this, special thanks are certainly due to Dr Fagg and Nicola Kaminsky, who made this multifaceted event possible.

Having graduated from the University of Hull with a BA in English and American Literature and Culture, Mandy Griggio is currently continuing her research on John Sloan at the University of Birmingham.
View all posts by Amanda Griggio →
Tagged  Art history, Ashcan School, C20, George Bellows, New York City.
Bookmark the permalink.