For the second year running, U.S. Studies Online ran a competition to choose the keynote speaker for the British Association for American Studies’ Postgraduate Conference at the University of Essex. This year’s winner was Patricia Malone (Queens University Belfast), who opened the conference with her paper titled ‘We Hold These Truths to Feel Self Evident: Post-Truth and American Myths, or “The Tyranny of Intimacy”’.

Malone’s paper was ambitious in scope, appealing to a range of different disciplines and drawing upon an impressive range of source material and methodological approaches. The USSO Keynote Competition requested entrants use engaging visual material, and Malone’s humorous PowerPoint offered the perfect accompaniment to her engaging discussion. Despite the often serious nature of her subject matter, Malone’s paper was peppered with entertaining asides, keeping the audience’s attention and demonstrating her skill as a speaker. 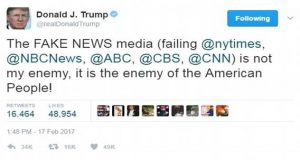 She opened her lecture, perhaps unavoidably, with a discussion of Donald Trump. She argued that some believe Trump has capitalised on the value that the American public places on individualism, a myth which dates back to the founding of the nation. She spoke of the importance the founders placed on establishing a sense of nationhood, which permeated both economic and social concerns of the era. In their eyes, to be American was to be free of obligations (unlike the Old World of Europe and its feudal inheritance). Yet the myth of the self-determining ‘foundational American subject’ has always been at odds with the individual wealth of European immigrants and ,of course, the role of slavery in the US’s economic system. Nevertheless, these individuals believed they ‘held their own destiny in their own hands’. A healthy civil society was also considered a key element to a successful democracy, where everyone was expected to play their part.

Turning towards more modern events, Malone jumped forward to the 1990s, exploring the era’s growing concern with the role of the ‘technological transformation of leisure’, as evidence suggested that people were tending towards more private leisure pursuits—such as television—and less engaged politically and socially with their communities. But conversely, during this inward turn in American cultural life, the lines between public and private life appeared to be blurring, creating much of the anxiety which now afflicts modern day America. She argued that western society has placed emphasis on people’s personal lives, creating, in Lauren Berlant’s words, ‘a crisis ordinariness: traumas of the social that are lived through collectively’. With the rise of technology including photography and film, individuals became voyeurs of their own self-presentation. Resultantly, advertising was quick to co-op the idea of individualism, to various effects. 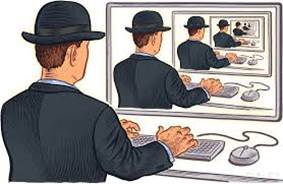 Bringing her argument to the present, Malone cited the rise of reality television and social media as evidence of the growing role of the ‘confessional’ as a primary mode of communication, a direct symptom of contemporary desire to regard our emotions as having a validity simply by being addressed. Malone cited Mimi Thi Nguyen’s work on the ‘politics of intimacy’ to illuminate the idea that the only way to understand the world is to understand one’s self, and be truthful about oneself, which means to make this truth public. This has helped people to conflate the idea of experience with expertise. The ‘framework of feeling’ outlined in the ‘politics of intimacy’ thus makes these expressions of feeling difficult to critique or engage with, as Eva Illouz also argues. When all politics becomes personal, it becomes more difficult to engage with other people’s opposing political views, and can even shape how we conceive of political views and positions.  Online and anonymous confession allows emotional therapy without the need for human interaction. Thus, venting your frustrations online becomes a one-sided conversation, or an echo chamber, rather than a genuine conversation. Furthermore, the rise of social media has resulted in an ever-growing ability for people to ‘self-edit’, reinventing themselves through social media and thus creating an immediate yet inconsistent presentation of themselves.

Returning to the election of Donald Trump, Malone argued that though his election was seen as an inevitable upset, it was in fact a result of a confluence of circumstance. Expression of emotion is now seen as a sign of authenticity, regardless of the emotion expressed, or its coherence. Though this is not an altogether novel circumstance, the evolution of technology has allowed even more of this unfiltered self-presentation than ever before, resulting in people interpreting incoherent expressions of feeling as somehow being more believable as a result of their unfiltered nature. 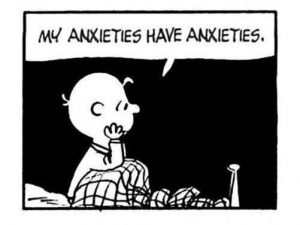 Malone finished with some interesting questions. How can the ‘project of self’ become an ethical project? Is self-care a fundamentally radical act, where caring for the self includes the gathering of truths beyond the self? And, what does this suggest for our understanding of the relational nature of power, and of the self? She concluded that the personal is political, but we cannot see all political engagement through the personal feelings and interests. Ultimately, the ‘tyranny of intimacy’ is most flawed in that it reduces all interest to self-interest.