BAAS 2022 Panel Review: ‘Surveillance, Technology, and Discrimination in Literature and Culture Across the Americas’

‘Surveillance, Technology, and Discrimination in Literature and Culture Across the Americas’, British Association for American Studies Conference 2022, University of Hull, 21-23 April 2022

Surveillance and dystopian futures are increasingly urgent and generative areas of research for scholars of the contemporary Americas. Just recently, headlines have been dominated by the potential overturning of Roe vs Wade; consequently concerns have sparked over how data companies might be obliged by law enforcement to monitor women accessing abortion services.[i] What’s more, a two-year investigation by Georgetown University has revealed the extent of ICE’s data monitoring, pointing to the organisation’s increasingly expansive systems of domestic surveillance.[ii]  It seems wholly fitting, then, that the BAAS 2022 conference hosted several panels exploring themes of surveillance. In particular, a rich and varied panel titled  ‘Surveillance, Technology, and Discrimination in Literature and Culture Across the Americas’ discussed the intersections of surveillance, capitalism, gender, racialisation and dystopia in contemporary American culture. 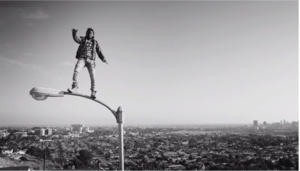 The form of five short papers worked well for the varied ground the panel sought to cover; the speakers paid attention to a range of media, with contemporary fiction, film and music all addressed during the hour-long presentation. The panel was particularly attuned to the colonial and racialising underpinnings of modern apparatuses of surveillance. For example, Kathryn Blance’s paper “Racialised Surveillance and Resistance in Popular Music” looked to the music and videos of Kendrick Lamar to examine how artists forge resistance to the racialising motivations of muscular state surveillance by shifting the lens from the experience of the ‘watcher’ to that of the ‘watched’. Blance discussed Lamar’s navigation of public space in his videos through the idea of ‘Black luminosity’, or forced visibility, and his resistance to these types of limitations placed on the Black body. Resistance through one’s relation to space also requires attention to time: in her paper “Surveillance and Storytelling in Latinx Dystopian Fiction”, Jade Hinchcliffe noted that these forms of resistance often urge a reclamation of the temporal planes which are co-opted and distorted by systems of surveillance, echoing writer Sabrina Vouvoulias’ words, ‘don’t let the future be written for you’.

Questions about the shape, use of, and claim to the future emerged throughout the panel. In their paper “‘How the World “Went to Shit’: The Representation of Infertility in Dystopian Literature” Katie Tobin and Ben Hammond turned to the work of Lee Edelman to consider the implications of reproductive futurism in an age of ecological crisis by exploring the possibilities and limitations embedded in the figure of the Child in dystopian fiction and film. Shifting away from ‘the weaponisation of childhood’ and its ideologised future, the paper suggested that real political possibility lies in the present—in figurations of childhood and motherhood that attend to a sense of ‘being in the world’.  Living presently, though, is complicated; as Victoria Brewster suggested in her paper “Los Otros Are Coming: Indigenous Justice/Revenge and AI Discrimination in The Tenth Girl by Sara Faring”, representing the present or the future, in all its utopian or dystopian incarnations, requires attention to the past. Assimilating the colonisation of lands with the colonisation of bodies through AI, Brewster invoked a posthumanist lens to explore what it means to occupy a body, and what claims to citizenship and humanity are attached to different forms of embodiment. 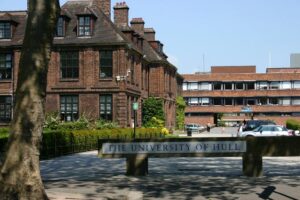 “The University of Hull” by Theo K is licensed under CC BY-SA 2.0.

Brewster’s observation from Faring’s horror novel The Tenth Girl (2019)—that embodiment is something earnt or ‘deserved’ through claims to humanity and mortality—illuminates the capitalist exchange of human bodies as another of the panel’s running themes. The motif of human bodies as currency emerged at several junctures, including in Emma Woodhead’s panel, titled ‘“George Saunders’ ‘My Flamboyant Grandson’, Personalised Advertising and Surveillance Capitalism”. In her presentation, Woodhead noted the startling prescience of Saunders’ descriptions of personalised advertising in his short story ‘My Flamboyant Grandson’ (2002), which align with Shoshana Zuboff’s The Age of Surveillance Capitalism (2018), published almost 20 years later. It struck me that both Woodhead and Hinchcliffe’s presentations featured images of bodies marked with barcodes, bringing to light the commodification of human experience that connects all five papers. Citing from My Flamboyant Grandson’s last lines, ‘someday something beautiful may come’, Woodhead highlighted the power of narrative to imagine a heterogeneity of experience and to project optimism, even in the murky techno-political landscape of our time.

Overall, the panel session underscored how turning to speculative and dystopian fiction, and equally to narratives of resistance, can help us to understand, address and counteract the manifold systems of surveillance that govern the contemporary Americas. Crucially, it also demonstrated how these systems are often anchored in and fuelled by logics of racialisiation and dispossession. As such, the panel did well to bring together different representations of past, present and future in order to challenge who can claim agency and humanity along these temporal axes. Nevertheless, it felt difficult to untangle these temporal axes, to unpick stories of unsettling futures from the sticky uncertainty of the present day. I left wondering whether the panel was really dealing with speculative and dystopian fiction, or if it simply addressed allegories of the present. Far from presenting as a weakness, however, I think that in this way the panel opened up urgent questions about how structures of surveillance, exchange and ecological crisis exist both now and later, how they intersect, and how together they shape what it means to be human.