Tim Galsworthy is a History PhD candidate at the University of Sussex. He is funded by the CHASE AHRC Doctoral Training Partnership. Tim's research focuses on American Civil War memory and the Republican Party in the civil rights era. Tim's first journal article – "Carpetbaggers, Confederates, and Richard Nixon: The 1960 presidential election, historical memory, and the Republican Southern Strategy" – is out now with Presidential Studies Quarterly. He is currently a member of the Southern Historical Association Graduate Council.
No comments 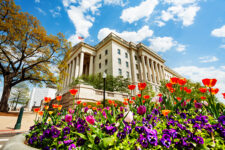 In March 2021, I was fortunate enough to be the recipient of a Postgraduate Research Assistance Award from BAAS. Receiving this award, especially one named after the great Peter Parish, was humbling. This award was also invaluable for my doctoral project. After initially considering the possibility of a visit to… Continue reading