Home » Articles by Bryan Jack
Bryan M. Jack is Assistant Professor of Historical Studies at Southern Illinois University Edwardsville. He is the author of the book, The Saint Louis African American Community and the Exodusters and his research focuses on African American history. He lives in the city of St. Louis.
No comments 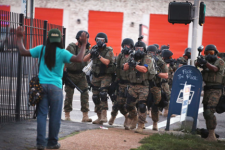 In 1970, Ferguson was 99% white and 1% black; in 2010, Ferguson was 29% white and 67% black. However, the town leadership and police do not reflect this shift—only three of the community’s fifty-three police officers are black […] St. Louis is a Northern industrial city with Southern characteristics. The effects of this combination caused one anthropologist to argue that St. Louis holds a Deep South ideology and social structure “straitjacketed in northern-style industrial infrastructure” resulting in an “astounding record of poverty and ethnic segregation.” Continue reading