Home » Articles by Birte Christ
Birte Christ is Assistant Professor of American Literary and Cultural Studies at Justus-Liebig-University Giessen, Germany. Her research interests include methodologies of American Studies, Gender and Sexuality Studies, and Law and Literature.
No comments 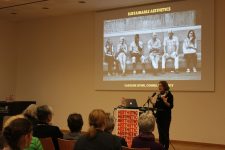 in the province of American Cultural Studies, the (re)turn to aesthetics is indeed more recent and takes a far more political perspective than seen in the ‘return’ of aesthetics within the more philological and less politically oriented quarters of the MLA since the late 1990s. The former is animated by the utopian desire that conference host Johannes Voelz (Frankfurt) described as a central characteristic of American Studies as practiced under the auspices of the American Studies Association. As speaker Lee Edelman (Tufts University) put it, what was at stake in the Frankfurt conference was really the ‘the progressive return of the aesthetic’. Continue reading