Benjamin Anderson is a PhD Candidate from the University of Edinburgh studying Loyalism in Vermont and the Northern Borderland from 1749 to its entry into the Union in 1791. He can be found on Twitter @Ben_Anderson44.
No comments 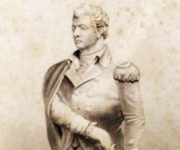 Ethan Allen is widely celebrated as one of the founding fathers of Vermont, formerly called the New Hampshire Grants until it declared itself an independent republic in 1777. In the decades prior to Allen’s arrival in the Grants, the settlers (the majority of whom owned illegitimate land grants from New… Continue reading