Home » Articles by Anne Stokes
Anne is a Graduate Teaching Assistant and PhD student at the University of Manchester, researching memorial sites devoted to the American civil rights and black power movements. Anne is also tutor with the Brilliant Club Scholars Programme and an editor of the University of Manchester's student run academic journal, Encounters: Politics, Society, and Culture in the Past.
No comments 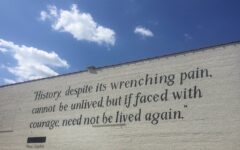 The past four years have highlighted the influence of memorials and popular memory in American culture. From the toppling of Confederate statues to the decolonisation of school curricula, many Americans have fought to establish a more inclusive and nuanced memorial landscape. This series illustrates how widely “memory” is both interpreted… Continue reading

The Progressive Era (1890-1920s) was a time of intense social, economic, and political reform largely carried out by the middle class. Most scholars of Progressivism, including David Thelen and Daniel T. Rogers, argue that Progressivism is not monolithic and there has never been a coherent definition. Paul Lawrie has chosen to focus on one particular aspect of the Progressive Era: the deepening inequalities that occurred due to an industrial and economic boom, causing a rise in racism and racial policy. Continue reading