“An Eagle On His Button”: How Martial Portraiture Affirmed African American Citizenship in the Civil War

October 2014 provides us with a duel lens to study the African American’s Civil War. The sesquicentennial commemorations of the Civil War gain momentum as we approach the close of the conflict, and Black History Month encourages us to study those who have often been relegated to a secondary position in the history of the war. Estimates state that of the approximately 180,000 African Americans who served in the United States Colored Troops, 36,000 died.[1] Considering the reconnaissance and local knowledge that enslaved African Americans provided Union forces in the South, the African American contribution cannot be ignored. Last month saw the 150th anniversary of the Battle of New Market Heights, in which 14 of the 21 Medals of Honor awarded to black servicemen during the war were won.

In the nineteenth-century, participating in military service existed in the psyche of the nation as a patriotic obligation to the United States for white males. Their service as citizen-soldiers during times of crisis ensured the preservation of the democratic liberties and principles of the nation. This emphasis on the common soldier and his contribution was, as historian Jay Luvaas notes, “uniquely American at the time, for in Europe soldiers were still regarded pretty much as the dregs of society”.[2] During the Civil War, African Americans were given their first large-scale opportunity to prove themselves through recognised armed service in the defence of the Union. This was an opportunity that few, whether slaves or freedmen, took lightly. Prominent abolitionist figures repeatedly emphasised the importance of proving one’s worth in the eyes of the white section of the nation through military service.

Frederick Douglass asserted that, “The chance is now given you to end in a day the bondage of centuries, and to rise in one bound from social degradation to the place of common equality with all other varieties of men.”[3] Douglass was acutely aware of the symbolism that African Americans in uniform would have, stating:

Once let the black man get upon his person the brass letters U.S., let him get an eagle on his button, and a musket on his shoulder, and bullets in his pocket, and there is no power on earth or under the earth which can deny that he has earned the right of citizenship in the United States.[4]

Such a statement reinforces the notion of soldierly service as a guarantor of citizenship. Figures I and II, displayed below, provide visual encapsulations of such beliefs, as they present the viewer with African American subjects exuding the military necessities of discipline and order. As Susan Sontag writes, the “camera record justifies. A photograph passes for incontrovertible proof that a given thing happened.”[5] The photographic portrait holds the power to provide a perpetual confirmation of the individual’s identity as a citizen-soldier. 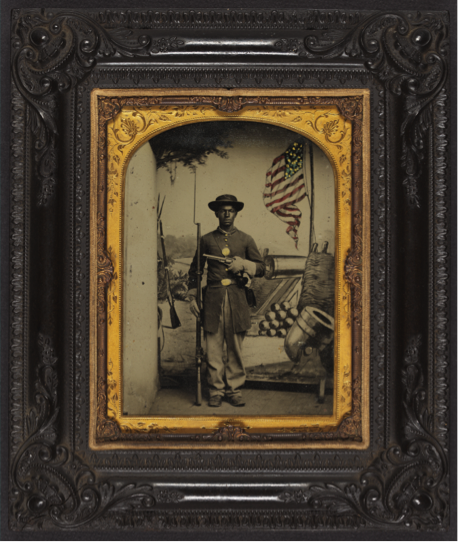 Considering white fears regarding slave resistance and unfettered black violence (emphasised especially by the Haitian Revolution and domestic events that such as Nat Turner’s Rebellion in 1831), these tintype portraits of armed African Americans would have been considered radical by conservative observers. Masculinity is constantly visible as a fundamental theme in Civil War martial portraiture, as this was a central characteristic required for one’s ability to defend their country and uphold its social virtues. However, in the case of African Americans this masculinity had to be proved as a force for justice in order to dispel institutionalised white discrimination. Although these images do suggest a potential for violence, the subjects’ discipline shows this as a force that would be considered patriotic and ordered, not barbaric and unrestrained. Both images exhibit African American masculinity as a controllable force, thus resisting the connotations of period sketches and writings which emphasize such masculinity as a vicious energy.

In Figure I, the subject has set himself against a background that includes a ferocious arsenal of weaponry. A stack of rifle-muskets, two artillery pieces and a pile of cannon balls are all notable on the painted backdrop, and in his hands he carries a rifle and a revolver. Due to the subject’s positioning, the cannon barrel almost appears as an extension of his physical form. However, the inclusion of the gabions on the backdrop, despite the arsenal the subject is surrounded by, suggests that this weaponry will be used defensively, thus removing fears of unrestrained offensive action.

The only features of this tintype that have been hand-painted are the national flag, the subject’s buttons, his breast plate and his belt buckle. Figure II is similarly highlighted, whilst also including a painted backdrop of a river scene, a powerful image of gaining freedom, as highlighted in several slave narratives; most notably in the Narrative of the Life of Frederick Douglass (1845). Douglass’ emphasis on the importance of the uniform is evident. The images contain symbols of citizenship and of nationalism; the flag speaks for itself, coat buttons bear the American eagle, as does the breastplate, and their belt plates are adorned with the letters “U.S.” As a result of this selective highlighting, the patriotic sentiment of these soldiers is clear to see; it illustrates their foremost desire to serve their nation through military participation, as opposed to using such an opportunity to seek revenge against the slave-masters of the South. 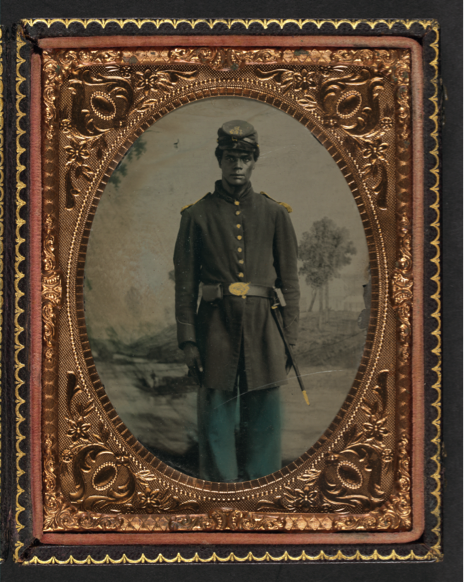 Therefore, the wearing of a military uniform symbolises the desire to prove one’s worth as a citizen. There were few other ways in which African Americans could gain a platform from which to prove their equality with white men, and to earn their right to citizenship in the post-war United States, than through honourable action carried out in the midst of great national suffering. This is especially so considering the prior use of African American manpower to act as cooks, teamsters and burial workers for the military. These portraits provide undeniable proof of military service, and as such the uniform and weaponry included in these photographs transcend being merely destructive armaments and become tools for the attainment of equality and freedom.

A particularly significant pair of photographs from the conflict are those which form a “before” and “after” vision of a runaway slave who became a Union drummer boy. These two images illustrate the uplifting and civilising influence that military service in the Civil War was perceived to have on African Americans by some white observers. In slavery, the boy appears in rags and tatters, his body exposed and with no props to symbolise his social worth. In the second image he stands as a drummer in formal military dress, wearing a frock coat and white gloves. The instrument, a martial symbol of organisation and of keeping time, provides evidence that he was able to rise from the oppression of slavery to the position of one who would beat the step that the Union Army marched to in its destruction of the South’s slave society in the last years of the war. 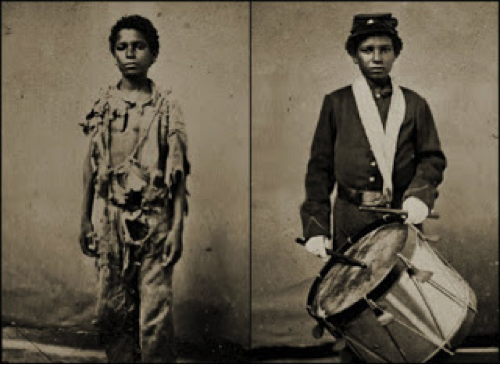 When studying the aforementioned soldierly images with those of the Figure III, it is clearly notable that these portraits bear no resemblance to the white representations of the African American in the nineteenth century. These photographs depict steadfast volunteers, men who wanted to be fixed forever in their portraits as citizen-soldiers in defence of the Union. These fragments of personal history entwine to aid in establishing the visual culture of those African Americans of the United States Colored Troops who fought for a vision of emancipation, civil liberties, and social equality.

Keeping Disaster at Bay: Securing the Climate Threat in “America’s Mediterranean”
American Studies in Europe: Interview with Francisco J. Rodríguez, University of Salamanca
Review: 'The (Re)production of Misery and the Ways of Resistance' American Studies Association Confe...
The Best of 2016, and What's next in 2017
‘[S]omething to feel about’: Zora Neale Hurston’s Barracoon: The Story of The Last Slave
The Indentured Atlantic: Bound Servitude and the Literature of American Colonization (Part One)
Generation Indigenous (Gen-I): Removing the Barriers to Success
Golf and Trump’s America

James Brookes is an MRes student in the American and Canadian Studies department at the University of Nottingham. His thesis focuses on the self-representation of the Union citizen-soldier in the U.S. Civil War through democratic mediums of portrait photography such as the tintype and carte-de-visite. In conjunction with the study of other archival sources such as letters, diaries, songs and post-war memoirs, he hopes to further establish the significance of these common agents and the methods they sought to understand and cope with the catastrophic conflict unfolding around them.
View all posts by James Brookes →
Tagged  African American Culture, Black History, C19, Civil War, Masculinity, Visual Culture.
Bookmark the permalink.