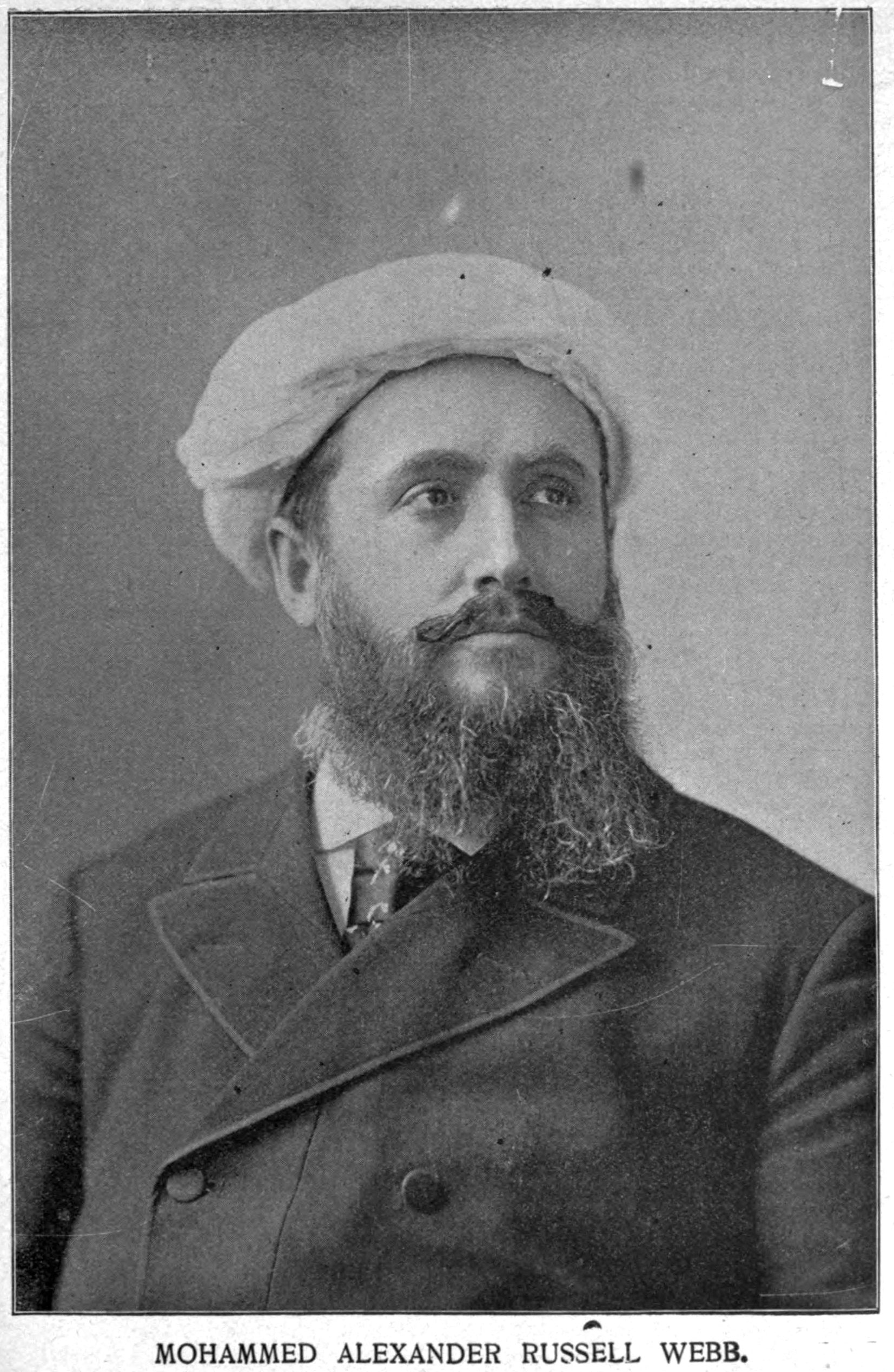 In a post-9/11 world, there are a variety of representations of Islam. From the US President, to academics, to twenty-four hour news talking heads, many praise Islam as peaceful or condemn it as a religion of hate. What many forget is that this love-hate representation of Islam goes back to over a century. While the current series on Islam in America focuses on a variety of representations of Islam, positive and negative, this post focuses on one of the earliest proponents of Islam in America, the tradition’s first American convert, Alexander Russell Webb.

The Nineteenth Century was a period of unprecedented religious innovation within the United States. Traditions such as Mormonism, Spiritualism, Christian Science, New Thought, Theosophy, as well as small religious movements based on charismatic figures all flourished. It was also at this time that America started looking east and paying attention to the religions of India, China, and Japan. By the end of the century, the first American Buddhist organization was founded by Japanese missionaries in California. It was during this period when so many eyes were looking east that Alexander Russell Webb found Islam.

Born in 1846 in the Hudson River Valley in the state of New York, Webb grew up surrounded by great diversity of people and religious traditions. It was in Upper State New York that Joseph Smith, Jr. claimed to be visited by the Angel Maroni, thus founding Mormonism, and it was also here that the Fox Sisters heard spectral wrapping that led to the emergence of Modern Spiritualism. While Webb was brought up a Presbyterian, by the time he reached maturity and attended Claverack College in Claverack, New York, which promoted free thinking and intellectual rigor, he had been exposed to a variety of religious traditions. Later in life he claimed to lose his religion in his mid-twenties, but it is fair to say he became disillusioned with the faith of his childhood and became a seeker. Webb’s biographer, Umar F. Abd-allah, calls this Webb’s “Spiritual Vagabond” period.[1] As with most seekers, he read about and investigated other religions, usually by reading various texts. This came to a head in 1880-81 when Webb joined the Theosophical Society and converted, as so many Theosophists did, to Buddhism. 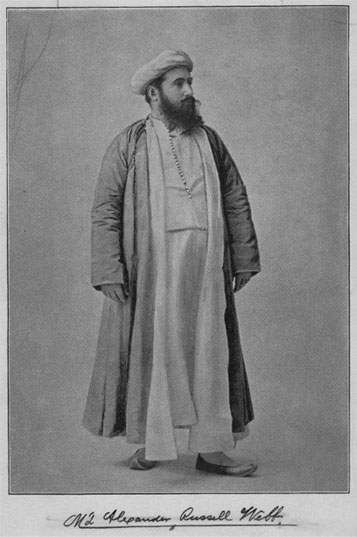 The Theosophical Society, founded in 1875 in New York City, claimed that all religions derived from one ancient wisdom and thus all religions contained at least a portion of the truth. However, in the earliest years, the society promoted the view that Buddhism and Hinduism contained the truest forms of those traditions and thus Theosophists promoted these traditions, in opposition to Western traditions, especially Christianity. Webb became interested in these “Oriental” ideas and found a group of like-minded people who shared his rejection of Christianity and the materialism of Victorian America. At one point Webb traveled to India, the place where the Theosophical Society moved its headquarters, and met numerous Theosophists, some of which were Muslim. It was also within the context of Theosophy that Webb first learned about Mohammed and he began to study his history and the history of Islam. According to Theosophical sources, Webb gave a lecture in India about Mohammed’s orientalism explaining how it was compatible with Theosophical principles. Finally, Webb claimed that Mohammed had secret, esoteric teaching that only the privileged few knew.[2]

Webb began to correspond with a number of Muslims at this time from a variety of places. One important correspondence was with Mirza Ghulam Ahmad, a controversial leader in Islam. He claimed that he was the fulfiller of the end times prophesies and that Islam was the final dispensation of the truth. While the correspondence was brief, lasting from 1886-1887, it was influential on Webb who seemed to decide that Islam was the best eastern religion to manifest the Ancient Wisdom of which Theosophy spoke. Webb writes to Ahmad, “I think I understand you to be a follower of the esoteric teachings of Mohammed, and not what is known to the masses of the people as Mohammedanism.”[3] Webb also corresponded with prominent American officials and through these connections was appointed Consul to the Philippines by the United States government in 1888.[4] It was during his time in the Philippines that Webb finally converted to Sunni Islam. After his conversion, his family who had also moved to Manila converted. Webb maintained his correspondence with prominent Muslim figures throughout India and the Middle East.

In 1892 Webb resigned from his position in Manila and traveled to India where he met up with Moulvi Hassan Ali and other Muslims to raise funds for American missionary work. Having been an American Consul afforded Webb many privileges as he traveled and he used these advantages towards furthering his cause. After a year of traveling throughout India seeking funds, Webb finally returned to America, arriving in New York City in February 1893. It was in Manhattan that Webb began promoting his faith, publishing a book entitled Islam in America. The purpose of the book, he claims is to “give to the English-speaking world a brief but accurate and reliable description of the character and purpose of Mohammed (pbuh), and a general outline of the Islamic system.”[5] He also published an English language newspaper called, Moslem World, promoting Islam and giving news of various kinds relevant to the religion. All these efforts to promote Islam in a positive light were funded by his supporters South Asian Muslim and Ottoman supporters, including the Ottoman Sultan Abdul Hamid II.[6] However, their support was intermittent and thus Webb often struggled to make ends meet.

Perhaps his most successful attempt to promote Islam positively and the event for which Webb is best known is his attendance as the only representative for Islam at the 1893 World Parliament of Religions.  The World Parliament of Religions took place in Chicago during the Columbian Exposition, the World’s Fair. During his speech, he criticized the bigotry against Muslims by Americans, noting how any Muslim who does wrong becomes representative of the whole religion. Webb also implored his audience to see the reason and logic behind Islam and to give it a fair chance by impartially studying it. Overall his efforts received positive, or at least polite responses, all except his mild defense of Islamic polygamy which was met with hisses and rebuke.[7]

Webb grew up at a time of great religious change and innovation. Not only were new religions being founded, but religions from Asia were seen as viable alternatives to traditional forms of Christianity. America was no longer isolated by two oceans, its citizens and religious traditions were being exported and new religions imported. His adoption and promotion of Islam offers a great example of the ways Islam has been represented within the public over the last century. After the American Civil War, the United States began a new spiritual quest, looking for renewal and rebirth. In Webb, one strand of that rebirth begins. While he was far from successful in his efforts to spread his newfound faith, his tireless missionary work laid the groundwork for those that followed.

John L. Crow is an Instructional Development Faculty at Florida State University’s Office of Distance Learning and a PhD graduate student in FSU’s Department of Religion. He has an extensive background in information technology and is academically trained in American Religious History and Western Esotericism. His interests, however, are wide ranging, dealing with technology related to on-line active learning, digital humanities, body studies, the intersection of science and religion, and the development of eastern religions within the west, particularly Buddhism in the West.
View all posts by John L. Crow →
Tagged  Alexander Russell Webb, C19, History, Islam, Muslims, Religion.
Bookmark the permalink.