On a bitterly cold morning in November 1864, the windswept plains of South-eastern Colorado were the scene of a brutal and bloody massacre. Seven hundred Cheyenne and Arapaho woke with the rising sun to the distant thud of hooves heading to their village. The women cried out: “The buffalo are coming!” In fact the thunderous roar was U.S. Colonel John Chivington and 700 volunteer soldiers on the warpath. Alarm spread through the village and Chief Black Kettle raised both a white and a U.S flag as signals of peace. Chivington ignored him and his men indiscriminately opened fire on the encampment. When the firing ended 165-200 Cheyenne and Arapaho had been brutally slaughtered. While the warriors fought back, escapees dug pits to hide along the banks of Sand Creek, but their attempts to flee were no match for the guns and ammunition of the soldiers. Chivington and his men returned the next day, looting, scalping and mutilating the dead, taking Indian body parts as trophies of their conquest. Before they left, the militia set fire to the village, leaving the surviving Cheyenne and Arapaho, who were hiding in freezing conditions, to make their way to other Cheyenne villages in the north. 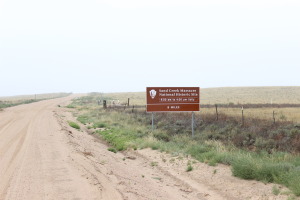 This is the story of the Sand Creek Massacre, an event that has haunted Colorado’s memory for over 100 years and has only recently been memorialized as a National Historic Site. My PhD research makes a comparison between three Native American Massacre Sites – Bear River (1863), Sand Creek (1864) and Wounded Knee (1890) – and explores how the collective memory of these massacres has been shaped and constructed in both Euro-American and Native American culture from the occurrence of the atrocity until the present day. These sites are the grounds of highly contested memory and attempts to memorialize and remember each massacre collectively has been a fraught process.

Collective memory theory was founded by the French sociologist, Maurice Halbwachs, in the 1920s. Halbwachs argued that it was individuals as group members who remembered as opposed to memory being an individual construct. Halbwach’s legacy has been taken up by American scholars such as David Thelen whose seminal article, Memory and American History (1989), posits that American historical memory explores how people search for a common memory together to meet their present needs. Myths, legends and formalized expressions of collective memory are formed as Americans negotiate memory. The Euro-American mythical memory of the frontier is often evoked to encourage support for contemporary political concerns. Native American massacres were a horrific part of the creation of these myths and remembering them reminds Euro-Americans of terrible moments in their shared past. Attempts at collectively remembering Native American massacres mean old animosity between the massacre descendants and Euro-American cultures have resurfaced, impacting upon a national process of healing, and reminding us that memory is always culturally specific.

I was recently given the opportunity by the British Association of American Studies to travel to the United States to research these massacre sites. I was able to conduct some fascinating archival work on this trip but here I want to focus on my visit to the Sand Creek Massacre Site. Sand Creek is the only site of the three I am studying that is now a National Historic Site, meaning there has been an organized process between the National Park Service (NPS) and the Cheyenne and Arapaho tribes to collectively remember the massacre. Cultural differences, a justified mistrust of government authorities from the massacre descendants, as well as concerns over land ownership often slowed the memorial process. Sand Creek is therefore an excellent example of how cultures engage in the social construction of memory.

I began my journey travelling to Eads, a remote town in the south-eastern corner of Colorado, the landscape of the massacre. The day of my visit the rain was falling heavily and there was a thick mist covering the plains. I was directed to the site by an international brown tourist sign and proceeded down eight miles of dirt road before reaching a small cabin with a sign welcoming the very few tourists on that rainy day to the “Sand Creek Massacre National Historic Site.” As I stepped inside the cabin, Jeff Campbell, the Park Ranger, was providing two other visitors with a detailed and knowledgeable account of what happened at Sand Creek. Having read about Jeff’s work on the history of Sand Creek in Ari Kelman’s excellent book, A Misplaced Massacre: Struggling Over the Memory of Sand Creek, I was very excited to meet him. Campbell has worked closely with the Cheyenne and Arapaho tribes, gathering oral histories in order to clear up misrepresentations of that bloody day. Once Campbell’s talk was over, we zipped up and headed out to the site. Guided tours were usually offered but they were making an exception that day because of the dreadful weather. 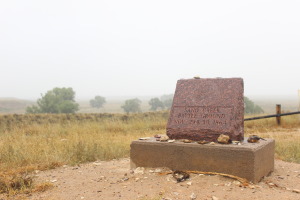 Earlier perceptions of Sand Creek had referred to the slaughter as a battle but there was no mistaking that the current memorials leading to the site regarded this atrocity as a massacre. The first marker referred to the attack as a ‘national tragedy,’ using the words of George Bent, a Cheyenne Warrior: “We ran up the creek with the cavalry following us…. The dry bed of the stream was now a terrible sight: men, women, and children lying thickly scattered on the sand, some dead and the rest to badly wounded to move….” Once I had reached the bluffs overlooking the site the visibility was very poor so it was hard to see the 50 miles of usually arid plains that the massacre site encompassed. However, there was an immediate sense of the importance of this ground for the Cheyenne and Arapaho massacre descendants, with specific areas fenced off from tourists as sacred ground. In the center of the dedication ground was an old memorial from the 1950’s that read: “Sand Creek Battle Ground: Nov 29 & 30.” Randomly placed around the sign were pieces of stone, rope and coins, dedications left by tribal descendants. The old naming of ‘battle’, combined with these offerings, demonstrated conflicting portrayals of memory. 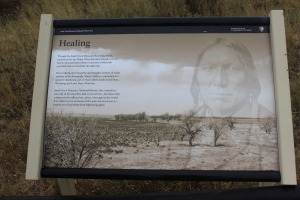 The Cheyenne and Arapaho have since worked in conjunction with the National Park Service to erect their own memorials detailing their perceptions of that day. The massacre descendants were involved in an oral history project. Often with the help of tribal translators, they interpreted their stories of the massacre to the NPS. This was a fraught process as many worried that the meaning of their stories would be lost or reinterpreted by the NPS, especially as many of the stories had remained within Cheyenne and Arapaho families for many generations. The most apparent difference between Euro-American memorials and the tribal markers was the descendants’ focus on cultural continuity and healing. One marker entitled, “Returned to Sand Creek,” read: “Many years have passed. The land is still here. We lived here, our clans lived here. The land here is our home-we have come back home.” Another sign entitled “Healing,” stated: “Sand Creek Massacre National Historic Site reminds us not only of the atrocities that occurred here, but those that continue to be inflicted on cultures throughout the world.” For the massacre descendants, memory is part of a continuous process that is closely linked to their recognition of the past.

I left the site that day with a greater sense of the meaning that the memorialization of Sand Creek had for the Cheyenne and Arapaho, having previously regarded it as a Western preoccupation that had limited significance for Native Americans. Through memorialization, Cheyenne and Arapaho are able to reclaim their past and create memories that are deeply rooted in healing and cultural survival. Importantly, the memorials give the descendants the opportunity to inform us of their perceptions of their history; a history that has been dominated and constructed by Euro-America. However, I was also aware of the lengthy, conflicting and aggravated process that had gone into trying to create a collective memory of such a contested and shameful area of American history. Memory is difficult and is, of course, constructed to reflect current concerns. It became unacceptable to call the events at Sand Creek a battle considering current American racial and cultural overtones, nor was it appropriate to ignore the Cheyenne and Arapaho voices. As demonstrated at Sand Creek, the past remains very much part of the present and perhaps this is something Euro-America can learn from Native Americans when memorializing and commemorating America’s past. Collective memory, however conflicted, should offer lessons and warnings that can be of value in present circumstances. The struggle to remember Sand Creek collectively challenges the American use of glorified myth to formulate a united American collective memory.

Reality Check or Business as Usual? COVID-19 and the Future of U.S. Capitalism
American Women Writers and Wars on Foreign Soil—Part One
Book Review: Literary Fiction: The Ways We Read Narrative Literature by Geir Farner
African Americans and Anti-Colonialism
Storify of our #bookhour on THE HEART GOES LAST by Margaret Atwood
The Toppling of Þorfinnur: Vandalism as Dialogue and Direct Action
"[L]ittle difficulties will get to be great difficulties": Joel Palmer and the Office of Indian Affa...
Meditations on Critical Race Theory and 21st Century Anti-Communism

Susannah Hopson is a third year PhD candidate at the University of Hull. Her research makes a comparative study of three Native American Massacre Sites from 1863 until the present day in order to test the limitations of collective memory in the American context. She reveals memory as a deeply culturally specific process that does not always gel with the hegemonic discourse imposed by settler communities.
View all posts by Susannah Hopson →
Tagged  C19, Memorialisation, Memory, Native Americans.
Bookmark the permalink.