Richard Martin: How would you assess the development of American Studies within the context of post-war US foreign policy, especially with regard to Europe?

Jack Thompson: As scholars such as Richard Pells have observed, the United States initially encouraged American Studies in Europe after the Second World War as a way to tie the Old World more closely to the New, and many Europeans were eager to learn about the new superpower. American encouragement and money combined with European curiosity to create a thriving field of study. Of course, over time, American Studies in Europe evolved in directions that early Cold War policymakers in the US could not have imagined, or would have necessarily always welcomed. However, the incredible richness of the field today emerged thanks to this close, if not always stress-free, post-war transatlantic relationship.

RM: Some observers in the UK have suggested that there is a discernible division within American Studies programmes between the study of history and politics on the one hand, and literary and visual culture on the other. Would you agree?

JT: To a large extent I think that this is true. I have attended a number of conferences in which both sides of the discipline are present, but have seen little concrete interaction between the two. To a considerable degree, I think that this is a logical consequence of the way that we are trained as researchers: few of us are encouraged to develop expertise in the cultural/literary and political/historical sides of the discipline. 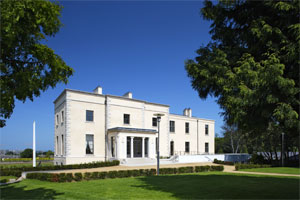 RM: Is there a particular model of American Studies that the Clinton Institute follows?

JT: Generally speaking we use the term American Studies in its broadest sense. That is, for us American Studies represents any and all subjects related to the study of the United States. That said, we do tend to specialise as researchers and teachers in one or the other side of the cultural/political divide. 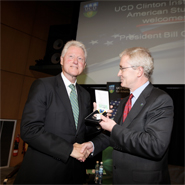 Bill Clinton at UCD in 2010, with the UCD President, Dr Hugh Brady

RM: You’ve studied and worked in the UK, the US and Ireland. How have these transatlantic travels shaped your work?

JT: My travels have shaped my work in two respects. First, studying, working and living in both Europe and in the US has influenced my research in the sense that my original interest in American foreign policy has evolved to include a focus on the transatlantic elements of the subject. I would find it strange to live in Europe but not incorporate the things I read in the newspaper every day into my research. Second, my transatlantic sense of identity plays a big role in my teaching. Having lived for an extended period in the US and Europe means that I understand, to an extent, the world-views of each side and can discuss this in the classroom. As an increasing number of my students also have complicated senses of identity, I find that this leads to richer discussions.

RM: How do you see American Studies as a discipline evolving in the near future?

JT: Unfortunately, it appears that ever-greater specialization will continue for the foreseeable future. Productivity in research and publishing is the primary task for most academics today and, as research continues to become ever more specialized, our teaching naturally follows. I wish that there were more incentives for academics in our field to publish and teach on both sides of the culture/politics divide, but I see little prospect of this happening any time soon.

Dr. Jack Thompson is Assistant Lecturer at the Clinton Institute for American Studies, University College Dublin. His research focuses on the roles played by public opinion and domestic politics in US-European relations and American foreign policy decision-making. He is co-editor of Progressive Politics in America: Past, Present, and Future, which will be published by Oxford University Press.
View all posts by Jack Thompson →
Tagged  C20, C21, Europe, Foreign Policy, Interviews, Politics, Transatlantic.
Bookmark the permalink.