Richard Martin: How would you describe the current state of American Studies in Turkey?

Gözde Erdoğan: Turkey occupies a strange position in the world and this also affects the country’s development and perception of a field like American Studies. Although Turkey is very much in tune with most of the modernizations and lifestyles of Europe, it is also influenced by the Middle East and by Islamic policies.

American Studies in Turkey remains a very specialized field which is known and practiced by the few experts who work in the few departments we have. As for the students, they usually come to university familiar with departments like English Language and Literature and think that those constitute more legitimate fields of study. I think the main reason for this is that for regular people in Turkey, America is seen as a giant world power and is mostly associated with money and popular culture. Hence, some struggle to see the literature and culture of America as a legitimate field of study. But we do our best to change their views and to transform them.

For academics, the picture is also not so bright. American Studies departments in Turkey are closing down one by one – mostly due to a lack of funding and low enrollment numbers. We need better promotional strategies because if there are no departments, there will be no place for us to work and develop the field.

Hacettepe has the oldest and largest American Studies department in Turkey, but we need more exposure and more collaboration with America and Europe to attract students.

RM: You mentioned the influence of Middle Eastern culture in shaping Turkey. In what ways (if any) do you think the United States’ military involvement in that region has affected the perception of American Studies in Turkey?

GE: This is a very good question. Naturally, the US military involvement in regions close to Turkey makes many more people examine the foreign policy of the US. With the Iraq War and now the situation in Syria, the actions of the American government have affected real lives in Turkey as well. Even though our government is an ally of the US, seeing real and consequential power exercised by America makes people in Turkey a little cautious or weary of the US. The argument that the US is the world’s biggest imperialistic force can be heard on a daily basis here in everyday life. As a result, this negative image also shapes the future of American Studies here.

RM: What do you think are the most important questions in American Studies at present? How do you think the discipline has changed in the last decade or so?

GE: At the moment, as I have just finished my PhD dissertation, I am mostly aware of the cultural studies/popular culture/television studies aspect of the field. In my own academic career, there has been a natural trajectory from more literature-based research towards popular culture. After the emergence of neo-Marxism, post-structuralism, semiotics and postmodernism, I think the boundaries are collapsing and popular culture is becoming more and more a legitimate field of sociological study. I am also aware of the need for an interdisciplinary approach no matter what the field of research. Again, from my own research, I think Gothic studies are becoming more and more relevant, and should be explored as a wide interdisciplinary field.

I think 9/11 and the events that occurred in its aftermath also affected American Studies. Trauma studies once again became popular, as well as a growing interest in horror and the gothic. Other developments have been the growth of localist studies in archives and the writing of urban histories.

RM: Your PhD project looks at the relationship between television and the idea of Southern Gothic. How does the televisual form of this concept compare with its literary, cinematic or artistic portrayal? What specific shows have you been analysing? 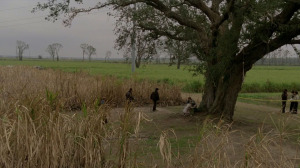 GE: The prevalent themes of Southern Gothic can be found in its televisual forms and, of course, television also carries many resemblances, in both narrative and visuals, to films within this field. For instance, a show like True Detective bears more resemblance to a long Southern noir film than to a typical television drama. However, in shows like American Horror Story: Coven and True Blood, I believe television brings a level of kitsch or postmodern aesthetics to the field of Southern Gothic. In most of its televisual forms, Southern Gothic seems to flaunt new hybridities, be it with soap opera (like in True Blood) or with detective narratives (like in True Detective). This, I think, partly stems from the fact that televisual narratives, from their onset, have always been more hybridized than other forms and this generic fluidity opens up new possibilities for Southern Gothic.

RM: You completed your PhD this summer – what plans or hopes do you have for the future?

GE: The most important career goal I have right now is to get some sort of scholarship to study abroad for a period of time, since I have never had the opportunity to do that. I am currently looking into post-doctoral opportunities in the United States.

When a novel changes a social system: Mary Jane Ward’s The Snake Pit (1946) and the US state psychia...
"We Are Not A Virus": Challenging Asian/Asian American Racism in the 21st Century
Sound, The Second-Line, and the Politics of Post-Katrina Memory
Book Review: Masculinity in Contemporary New York Fiction by Peter Ferry
The Louisiana State Penitentiary and the Limits of Prison Rodeo Photojournalism
Review: 'Legacies and Lifespans: Contemporary Women’s Writing in the 21st Century'
Latinos and the Language Question: Arizona, 1967-70
Cyborgs, Simians and San Francisco (part one) - Bodies and the American West

Gözde Erdoğan recently completed her PhD in the Department of American Culture and Literature at Hacettepe University, Ankara. Her research examines the notion of Southern Gothic in American television. She has served as the Treasurer of the American Studies Association of Turkey.
View all posts by Gozde Erdogan →
Tagged  C20, C21, Cultural History, Europe, Gothic, Interviews, Popular Culture, Visual Culture.
Bookmark the permalink.