Richard Martin: Your PhD explored the development of American Studies in Spain after 1945. What initially characterised the discipline’s development in Spain compared with other European countries?

Francisco J. Rodríguez: After the Second World War, the American military began to value the Spanish peninsular as an important strategic element in the Cold War. On his part, Franco needed American support to overcome the international ostracism caused by his risky friendship with the Axis nations. Thus, the Spanish-American agreement of 1953 could be understood as a perfect “marriage of convenience”. From the first moment, Washington information services warned that it was necessary to keep warm relations with the Franco regime – access to military installations depended on that – but simultaneously, not to drift too far from the republican-democratic opposition in Spain, whose role would supposedly increase when the dictator disappeared. The promotion of American Studies in Spanish classrooms was understood by Washington as a valid soft power strategy combining both objectives, which might seem conflicting at first glance.

On Spanish soil, American cultural diplomacy mostly operated without too much urgency. Friendship with Franco was perceived as royal and endless. Consequently, the programme of cultural relations executed by US diplomats in Spain lacked resources compared to those implemented in West Germany, France and Great Britain. Promotion of American Studies in Spanish classrooms did not escape this shortage. 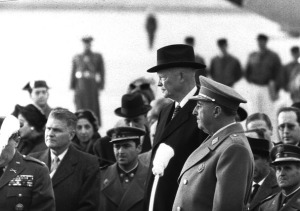 General Franco and President Eisenhower in Madrid in 1959

RM: What hopes did the Spanish and American governments invest in American Studies and other post-war cultural programmes? And how did their competing priorities clash?

FJR: The Spanish and Americans held opposing positions about which areas of knowledge should be prioritised by bi-national exchange programmes – the most widely known being the Fulbright scholarships. Franquista educational authorities understood the establishment of these grants in 1958 as a privileged channel to gain access to American scientific and technological resources. These hopes were frustrated, since the Fulbright programme – as in many other countries – was designed to prioritise exchange within the humanities and social sciences – the fundamental bodies of American Studies. These disciplines were considered to have more potential to promote mutual understanding than the “hard sciences” (maths, physics, chemistry and so on). In addition, a good percentage of Spanish anti-American critiques were directed toward the supposed “cultural naivety” of United States.

To begin with, different projects were directed to balance the large Spanish interest in American science and technology with the interest of US diplomats in promoting American Studies in Spain. Then, in the early 1960s, that balance disappeared. American preferences started to dominate the budget. The promotion of American Studies in Spanish universities received the largest portion of resources, in a bid to create a softer and more pleasant image of the United States among Spaniards.

However, Spanish personnel in the bi-national Fulbright Commission remained much more interested in American “hard sciences” than in American Studies. Consequently, American teachers and researchers in the “hard sciences” who came to Spain as Fulbright grantees were warmly welcomed. By contrast, their counterparts, specialists in American Studies, did not enjoy such a warm reception, and their knowledge was not held in such high esteem. In some cases, the latter visitors suffered alienation or professional bullying by educational authorities and/or by local teachers.

RM: What were the broader cultural and educational contexts surrounding the development of American Studies in Spain?

FJR: It is important not to forget that the anti-American feelings expressed by many Franquista personalities were quite intense in the period of the first Franco regime. The signing of the 1953 Agreements in Madrid did not end these attitudes completely. Rather, such opinions went into hibernation. The anti-Americanism of anti-Franco forces in Spain was reinforced by the American government dealing with the dictator, and it joined older perceptions of the United States as a young, materialistic nation, uncultivated in arts and letters. There was a question floating in that atmosphere: “What can American culture contribute to Spain, cradle of brilliant artists, motherland of the brave conquerors?”

Those who tried to open a space for American Studies in the Spanish curriculum had to fight against the traditional rigidity of the educational system. There were some young researchers and professors eager to learn more about the socio-cultural realities of the American nation. Broadly speaking, the wind was blowing against them. They were interested in teaching and researching American literature, art, philosophy and history, but they could not change and re-orientate curricula. This situation provoked a vicious circle: those specialising in American Studies had serious difficulties getting a permanent position in Spanish universities; available positions did not match their research profiles; therefore, the demand for studying American Studies remained low. Consequently, the promotion of American Studies in Franco Spain was not the “antidote against anti-Americanism” (using my book title) that some Washington diplomats thought it could have been.

RM: How would you assess the current state of American Studies in Spain?

RM: Your postdoctoral work has taken you to the Weatherhead Center for International Affairs at Harvard. How has this experience shaped your research and especially your approach to American Studies?

FJR: While working at the Weatherhead Center (I’m still a fellow in the Real Colegio Complutense at Harvard) I was privileged to have access to a huge collection of literature and primary sources that I hadn’t explored during my PhD. Some authors have pointed out that the promotion of American Studies played an important role inside the cultural Cold War. However, so far these affirmations have been based more on personal experiences and sketchy data, rather than on archival evidence. I wrote a paper during my stay in Boston, which strove to fulfil that historiographical lacuna, providing the ins and outs of the growth of American Studies in the early Cold War period, and its imbrications in U.S. Foreign Policy abroad.

RM: What do you think are the most important questions for historians studying the United States at present?

FJR: As I explained above, interest in American Studies among Spanish historians from 1945 onwards was scarce. In later decades, more attention has been paid to geopolitical connections between Franco’s Spain and Washington during the Cold War, mainly their military and economic aspects. More recently, scholars have prioritised an understanding of the cultural and intellectual synergies or clashes which arose between the two nations. The diverse ways in which both societies have dealt with their respective civil wars is another fresh line of research.

60 Seconds with Jennie O’Reilly
Fear is a Virus: Xenophobia in Mostafa Keshvari’s Corona (2020)
Asian American Solidarities in the Age of COVID-19
The Legacy of African American Abolitionist Frederick Douglass in Britain
Conference Review: 'Supposedly Fun Things: A Colloquium on the Writing of David Foster Wallace’
My Research: Juliet Williams
War Among All Puerto Ricans: The Nationalist Revolt and the Creation of the Estado Libre Asociado of...
USSO Call for Editors

Francisco J. Rodríguez, from the University of Salamanca, was formerly postdoctoral researcher at WCFIA, Harvard University (2012-2013) and Fulbright Visiting Scholar at George Washington University (2010-2012). His research interests include: cultural and intellectual relations between Spain and the United States; Anti-Americanism; and the promotion of American Studies during the Cold War. He has published three books (one of them as co-author) and is currently preparing two co-edited monographs, Selling Democracy? U.S. Public Diplomacy and Democratization in Spain (Palgrave Macmillan, 2015) and Estrategias de Diplomacia Cultural en un Mundo Interpolar (Madrid, 2014).
View all posts by Francisco J Rodriguez →
Bookmark the permalink.