Richard Martin: Your postgraduate work was undertaken at the John F. Kennedy Institute in Berlin, which was founded in 1963. How would you characterise the approach to American Studies taken at the institute?

Dietmar Meinel: My personal experience has been shaped by two trajectories at the JFKI. On the one hand, interdisciplinary thinking is a feature of the American Studies programme at the Institute. Since it is composed of culture, literature, history, sociology, political science and economics departments, these different approaches to American Studies are felt from the BA to the PhD level.

In addition, I have found my field of work, cultural studies, to be passionately engaged in a critical dialogue with particular groups and movements in U.S.-shaped American Studies. In my experience, issues of theory and questions about the field of American Studies as such played a vital role in the approach to American Studies at the JFKI. To be honest, though, this is a fairly recent discovery I made after I left the Institute and was more involved in a different set of academic contexts. 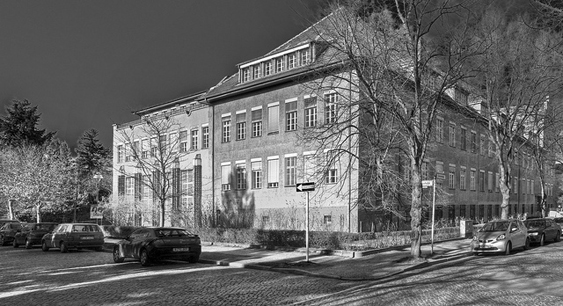 RM: Given that the JFK is an Institute for North American Studies, what role does Canadian Studies have in its work? And where do you stand on the position of Latin American Studies in relation to this?

DM: At the moment, Canadian Studies are not as present at the JFKI as many would like them to be. While a keen awareness and desire for the inclusion of Canadian Studies exists, only individual seminars or projects engage with the field.

Personally, I welcome any interdisciplinary exchange. To me, American Studies cannot be a nationalist U.S. American project. In addition to surpassing borders in the North, the borders in the South need to be contested and transcended as well. Whether historically, culturally, economically, or socially, an engagement with American Studies simply cannot end at some fenced national border.

How to integrate the Latin and the North American perspectives, however, is an entirely different issue – even my choice of words may already be worth contesting: should this be an integration, or an engagement with, or a dialogue, or do we not already establish these borders by artificially differentiating between Latin and North American perspectives?

While academic practice holds many challenges to this approach, I particularly wonder in what ways the dominance of a U.S. American perspective or of U.S. American-based scholars can be avoided. When we think of the structural advantages U.S. institutions and scholars possess, the expansion of American Studies to become, perhaps, a transcontinental field encounters the danger of restaging familiar imperialist practices most of us aim to question and deconstruct.

RM: Your doctoral thesis looks at notions of American exceptionalism in Pixar films. What interested you in this particular theme?

DM: When I was watching WALL-E I simply had an epiphany: what the film negotiates is a frontier identity packed into this stunning post-apocalyptic animation film. Since I hoped to develop a PhD project during that time and I was writing my MA thesis about whiteness in Disney films, what I saw in WALL-E spoke to my personal and my professional interests.

In addition, and this returns us to your initial question, U.S. exceptionalism was one prominent issue debated at the JFKI. In particular, the field of American Studies and its exceptionalist entanglement – the tenacious grasps, if you will – represents an alluring topic to me. In this way, I figured, I could engage in a conversation about the potential and limits of American Studies; I could also analyse some of the defining tropes of U.S. culture; and I could do so from a novel perspective, I hoped.

While debates about U.S. exceptionalism, and particularly about the field, seemed to be circling around a similar set of authors, books, and periods, my ambition was to address these debates from a slightly different angle in order to see what popular culture might have to contribute. I also felt that this might make some of the debates more accessible for a different generation of students, and I dreamed about bringing academic and public conversation into closer proximity. In many ways, my perspectives have changed, but I started out with a very idealistic and ambitious attitude.

RM: What American topics are your students at the University of Duisburg-Essen most interested in discussing and studying?

DM: In my current position, I only teach one course per semester which is why my experiences are rather limited. Due to the confines of the BA system, I have had many students in my introductory course to American literature asking for more freedom in choosing their term paper topic. The students feel that the current system does not give them enough room to engage with literature. In many ways and for different reasons, some students feel that their current studies do not allow them to do what excites them most: literature. While I welcome this desire for primary texts, the anecdote also speaks to the many problems of the Bologna Process.

I have made another discovery regarding my students that many colleagues have shared in private conversation. While students may feel trapped in a predefined BA and MA system, in my cultural studies courses I noticed a certain hesitation to articulate a critical position. Students often roll their eyes when they initially hear about feminism or imperialism or whiteness, because they associate these terms with a moralizing attitude and intellectual snobbism. In many cases, what has driven so many reforms in our society and in the academic system in the past does not seem to speak with the same power to our students. My impression is that students slowly overcome their hesitations during a course and eventually articulate feminist positions, for example, but they hesitate to openly label their perspective. So what I can say from my unrepresentative experience is that students continue to search for forms of critical thinking, but simply not in the forms I so gladly advocate.

To me, this situation is challenging and exciting at the same time: what new vocabulary and which new discourses speak to and for this younger generation. This is not only a question of reaching the students, but also asks what are the issues for a generation that grew up in a world shaped by feminism, anti-colonialism, or critical whiteness. These issues are by no means obsolete, but speak on some level very differently to the younger generation, while these students are by no means less political or critical in their thinking.

RM: We first met in 2012 at the Salzburg Global Seminar, an organisation which has been hosting American Studies events since 1947 (and from which the European Association for American Studies emerged). How would you describe the format of the discussions at this event?

DM: The year we attended seemed to invite a lot of lively debate and discussion. In my experience, these conversations have often been driven by different perspectives about what American Studies can and should do. At times, this seemed very much like a generational tension and I found this insight enriching. To dismiss an essay or book often seems very easy, but when you discuss a certain perspective with someone in person, I have had to realise that my position also often omits their complexity. While I am sure that this generational difference was not intended and derived from the structure of the Salzburg Seminar, being challenged to question my attitudes about American Studies helped me to broader my view. Structurally, I felt that the younger scholars were not necessarily given the space to present their thinking, but because the Seminar allowed for intensive debates and encouraged personal contacts, I still felt younger scholars could make their voices heard.

Dietmar Meinel is a PhD candidate at the John F. Kennedy Institute for North American Studies, Freie Universität Berlin, where he also completed his Masters Degree, and is currently a Research and Teaching Assistant at the University of Duisburg-Essen. His doctoral thesis explores animated film, U.S. exceptionalism and aesthetic theory.
View all posts by Dietmar Meinel →
Tagged  C21, Popular Culture.
Bookmark the permalink.