Richard Martin: How would you describe the current state of American Studies in Italy?

Angela Santese: The field of American history in Italy is experiencing a process of renovation in terms of both themes and methodological approaches, with scholars engaging in the same historiographical debates that are involving historians working abroad. 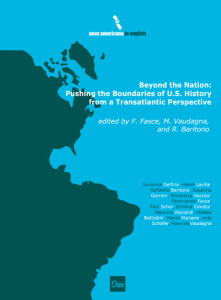 Beyond the Nation: Pushing the Boundaries of U.S. History from a Transatlantic Perspective, eds. Ferdinando Fasce, Maurizio Vaudagna, Raffaella Baritono (2013)

There is a growing interest in the analysis of US history from a transnational perspective, focusing not just on the interaction between state actors. The study of the American state and American society, and its political system and culture, increasingly involves analysing the exchange between people, ideas, social and political sciences, and movements, in an attempt to combine a national and transnational analytical approach. In this realm, a significant contribution is the recent Italian study entitled Beyond the Nation: Pushing the Boundaries of U.S. History from a Transatlantic Perspective, edited by some members of the Interuniversity Center for European-American History and Politics (CISPEA).

This renewed approach – that has been particularly developed by young researchers and scholars – also shapes the fields of foreign policy and international relations, as well as racial and gender studies. In these historical fields, there is a rising number of historical works concerning the multifaceted relations between Europe and the United States. In fact, gender studies are concentrating on the analysis of formal and informal political activities of white and African-American women to enlighten their agency, and to underline how they played a leading role at both a national and international level, mostly through transnational networks that involved not only European, but also African and Latin American women as well.

RM: Some observers in the UK have worried about the division in American Studies between scholars working in history and politics and those working in literary and visual culture. Is this a division that you recognise? And do you think it’s a problem for American Studies?

AS: In Italy there are no departments of American Studies and thus there is a clear distinction between scholars working in history and politics and those working in literature. Nonetheless, the role of associations like CISPEA and AISNA (American Studies Association of Italy) is essential to give some form of unity to the discipline. In fact, AISNA gathers in the same academic association people working in the field of American Studies from different disciplines: historians, political scientists and scholars dealing with literature and culture studies. This allows for exchanges between academics encompassing disciplinary boundaries, especially during the annual and biennial conferences organised by AISNA.

Moreover, CISPEA connects American historians from the universities of Bologna, Firenze, Roma Tre, Trieste and Piemonte Orientale. It aims to deal with the historical roots of transatlantic relationships, and welcomes students and scholars from different scholarly fields in its conferences, seminars and summer schools.

Both associations contribute to the development of a new generation of scholars as shown by the activities of the AINSA graduates forum and of the CISPEA Summer School Network. In particular, some of the alumni of the Summer School began a blog that offers historical perspectives on political events related to the US and to the Euro-Atlantic relation, via articles, book reviews and original interviews.

RM: In 2013 you attended the European Summer School on Cold War History, an event, established in 2009, which brings together PhD students and early career researchers from across Europe. How did the summer school help shape your own work?

AS: Attending this summer school was a really useful experience from several points of view. It provided me with the opportunity to interact with other PhD candidates, not just from Europe but from the US as well, to learn about their research projects, and to get a sense of the state of research outside my country. It was also a useful tool for my own research project since I had the possibility to get feedback, comments and suggestions from leading scholars in the field of Cold War history.

In particular, since I was at quite an early writing stage of my dissertation, following some of the suggestions and taking into account some criticisms my paper received, I had the chance to partially revise selected aspects of my argument, to incorporate some ideas that arose during the discussion, and to be better prepared for my dissertation defense. In the end, this summer school was a great opportunity to participate in a discussion with distinguished scholars and PhD candidates who have been trying to develop a deeper and critical analysis of Cold War dynamics.

RM: You currently teach Contemporary History at the University of Bologna. What themes and approaches most interest your students?

AS: Students seem to be generally more interested in themes that are in some way related to current events. In particular, present crises, like the situation in the Middle East and the ISIS advance or, in the past, the wars in Iraq and Afghanistan, usually instigate an interest in that particular area and for the historical roots of the crisis.

Dr. Angela Santese completed her PhD at the University of Bologna, where she is currently a Teaching Assistant in Contemporary History. Her research focuses on the anti-nuclear movement of the 1970 and 1980s. She has been a Junior Visiting Scholar at the Woodrow Wilson International Center for Scholars in Washington, DC.
View all posts by Angela Santese →
Tagged  C20, C21, Cold War, Transnationalism.
Bookmark the permalink.