The rise of Catholicism in the United States has been examined for the most part in relation to the expansion of the US empire. Early studies focus especially on the nineteenth and twentieth centuries. Only recently have the first arduous steps been taken in understanding the complex transformation of Protestantism and Catholicism in the US from the late seventeenth to the nineteenth century. In Catholicism and the Shaping of Nineteenth-Century America (Cambridge: Cambridge University Press, 2012), Jon Gjerde offers one of the first extensive comparisons of Protestant and Catholic history in nineteenth-century America. Gjerde argues that Protestant–Catholic conflicts helped shape US identity, giving rise to new ideas about religious diversity in American society. He approaches the history of the US empire with a solid understanding of ethics, clarifying aspects of the Roman and British Empires alongside the parallel rise of modern mass poverty and the US empire (29; 42; 71). He illustrates and underscores the dangers of a limited historical perspective on US empire that focuses on the “American” twentieth century. Gjerde argues that, in order to understand the evolution of US imperialism, it is important to consider questions on the history of Christianity from a longue durée perspective. 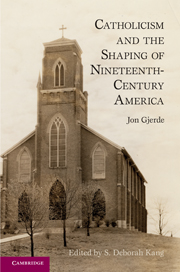 Almost a decade later with American Catholics: A History (New Haven, CT: Yale University Press, 2020), Leslie Woodcock Tentler takes up Gjerde’s project and extends it by writing a larger narrative of the entire history of Catholicism in the US. Her work follows in the footsteps of the ‘father of American Catholic church history,’ John Gilmary Shea, who published a four-volume history of the Catholic Church within the limits of the United States.[1] Tentler’s history may also be seen to follow James J. Hennesey’s (S.J.) American Catholics: A History of the Roman Catholic Community in the United States (Oxford: Oxford University Press, 1981) and Jay P. Dolan’s The American Catholic Experience: A History from Colonial Times to the Present (Notre Dame, IN: University of Notre Dame Press, 1992). While Tentler mentions none of these studies, she does refer to Dolan’s more specialised earlier study The Immigrant Church: New York’s Irish and German Catholics (Baltimore, MD: Johns Hopkins University Press, 1975) in her chapter on the growth and development of urban Catholicism (‘An Urban Stronghold’, 95–118). Despite the different foci of these studies, the title of one of Hennessey’s chapters, ‘Westward the Course of Empire,’ and Tentler’s title for the first part of her work, ‘On the Fringes of Empire,’ are examples of how the history of Catholicism in America has been interpreted in relation to the notion of empire.

But unlike Hennesey’s, Gjerde’s, and Dolan’s contributions to the burgeoning field of research on American Catholicism, Tentler’s work spans the entire history of Catholicism in North America, the nearly five hundred years from the arrival of the first Spanish missionaries to the present. She shapes her narrative around a central guiding question: What does it mean to be a “good Catholic” at particular times and in particular places? Her approach, which is socio-historical rather than theological, highlights participation in American politics and Catholic intellectual life. 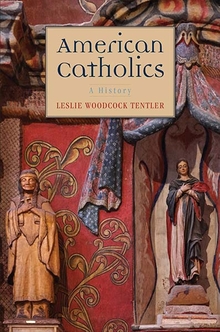 In The Imperial Church: Catholic Founding Fathers and United States Empire (Ithaca, NY: Cornell University Press, 2020), Katherine D. Moran connects the US empire with Catholicism even more explicitly. Moran argues that Catholic mission histories were a useful reference for Americans who narrated US settler colonialism on the North American continent and sought to extend military, political, and cultural power around the world. Recreating a rhetorical world at the turn of the twentieth century, Moran traces historical celebrations of Catholic missionary projects in the upper Midwest, Southern California, and the US colonial Philippines and claims that Catholic missions were central to ostensibly Protestant imperial endeavors.

Moran examines the language involved in the history of Catholicism in the United States in the form of political speeches, government reports, poetry, novels, plays, travel narratives, pamphlets, and advertisements. She shows that, as the United States established its continental and global domination as an empire of production and commerce in the Gilded Age and Progressive Era, Protestant Americans joined Catholic Americans in celebrating the Catholic imperial past. She argues that American Protestants joined their Catholic compatriots in their admiration of historical Catholic missionaries: the Jesuit Jacques Marquette in the Midwest, the Franciscan Junípero Serra in Southern California, and the Spanish friars in the Philippines. They compared these missionaries favorably to the Puritans, Pilgrims, and the American Revolutionary generation, and included them in a cross-confessional pantheon of US national and imperial founding fathers. Both American Protestants and Catholics viewed Catholic missionaries as gentle and effective agents of conquest, uplift, and economic growth, arguing that they could serve as founders and models for an American civilizing empire. They had an idealized image of the Catholic imperial past and thereby addressed themselves to both the history and future of US empire. Moran reveals how a new language of commemorative spirit redrew the boundaries between Catholicism and Protestantism in relation to the US empire and redefined our view of the past and the future of the Protestant-Catholic divide in the US.

The Imperial Church connects Catholic history and the history of US empire by uncovering the cross-confessional nature of the religious dimensions of American imperial rhetoric. Moran insists that the “Protestant nation” was informed by Catholic missions and is therefore an inappropriate term when it comes to characterising fully the religious dimensions of American imperialism. Moran’s book may be considered a case study of how American Protestantism—and by extension the politics connected to it—have been influenced and marked by Catholic tendencies. She points out that, by the end of the Civil War, there were more Catholics in the United States than adherents to any single Protestant denomination. This fact has had significant historiographical and political repercussions.

While Moran’s claims concerning empire are plausible from the point of view of political history, they become more complicated in light of religious and especially church history. American Protestantism is divided into mainline, fundamentalism, and evangelicalism, whereby evangelicalism represents a convergence of Catholicism and Protestantism. Moran’s study suggests by contrast—especially given the prevalence of anti-Catholicism in the Gilded Age and Progressive-Era United States—that the broad categories of Protestantism and Catholicism are useful concepts that have marked, and continue to mark, a number of important distinctions. To give but one of her many examples: in the so-called westward expansion in the nineteenth century, the view across the continent and into the Pacific represented for many Protestants a complicated mix of patriotic optimism and anti-Catholic anxiety, reinforced by the nativism prompted by the socio-economic mass immigration that started in the 1830s (103–04).[2] Her account may compel historians to reconsider key assumptions about the histories of US empire and American religion. Moran uncovers a language not of falsely understood Protestant exceptionalism, but of cross-confessional civilizing work and inter-imperial influence and inheritance. 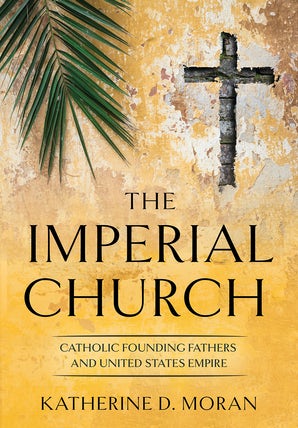 Authors of studies on church history should be more open about their own denominational adherence. Their readers, in turn, should be more critical of such studies in light of the authors’ biographical and denominational backgrounds. If the authors are not open about their denominational background, especially with regard to their views of current and past forms of Protestantism and Catholicism, it is difficult to evaluate their findings. Their readers are left in the dark about the authors’ standpoints and apologetic intentions. Progress in disentangling US imperial history and Catholicism will require greater clarity concerning one’s subjective bias and a new attitude toward church history. Admittedly, this may be a futile wish, given the fact that—in the overall landscape of denominational renewal and conversion that characterizes Christianity in the United States—neither missionary tendencies nor imperial intentions are on the decline.

These recent studies make unmistakably clear that the history of empire in the US cannot be written as a political and cultural history alone. The ease with which political discourse in the early tw entieth century moved from the Catholic empire of the past to the US empire of the present requires no less than a radical shift in our understanding of the history of society, culture, politics and the church, and their entanglements. More generally, the current state of church and religious history in the United States encourages us to better illuminate the connections between American Catholicism and empire, given that much of current church history is written from an often unacknowledged or inexplicit denominational perspective. Religious history alone will not succeed in bringing to light the more complex theological entanglements of empire.

Philipp Reisner teaches as a lecturer at the American Studies Departments of Heinrich Heine University Düsseldorf and Johannes Gutenberg University Mainz. His approach to research is multidisciplinary. His dissertation on the New English theologian Cotton Mather (1663–1728), focusing on his theological role in the context of early modern society, appeared in 2012. He submitted his habilitation thesis, a study of contemporary Anglo-American poetry, at Johannes Gutenberg University Mainz in 2020.
View all posts by Philipp Reisner →
Tagged  catholicism, lit review, Spaces of Empire Series 2020, us empire.
Bookmark the permalink.