Review of the “Alt-American” conference 2014

A Southerner Reading Emerson in England 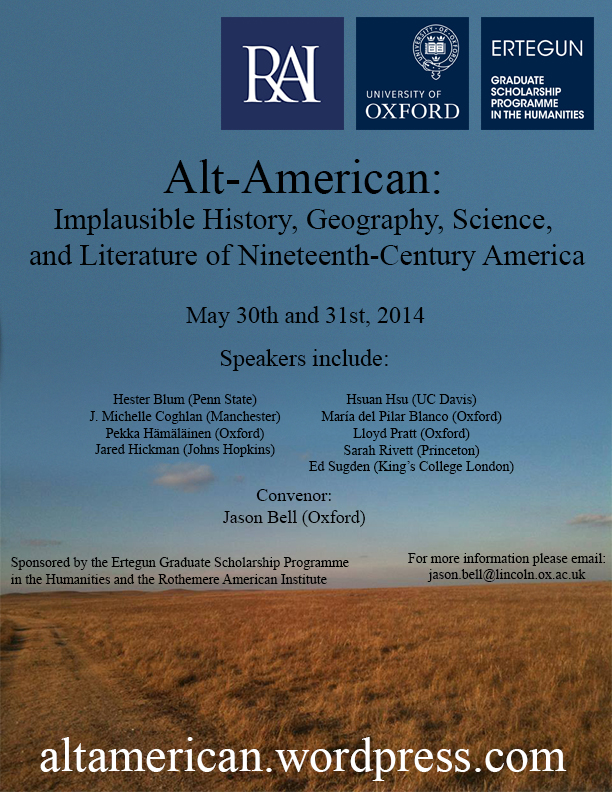 Ertegun House and the Rothermere American Institute, Oxford University, 30 and 31 May 2014

From 1920 to 1980, according to Google Books, the popularity of the word ‘alternative’ surged in American writing. These days, you’re six times more likely to call something ‘alternative’ than if you lived in the 1800’s. Anyone who’s read Lewis Carroll will know, though, that the nineteenth century spawned as many alternative ways of experiencing the world as the twentieth. However, by virtue of their relative strangeness, these alternative nineteenth-century lives evade historical knowledge, falling outside standard narratives and resisting scholarly recuperation.

On 30 and 31 May, Alt-American, a conference convened by Jason Bell at Oxford University, attempted to unearth what the conference subtitle described as the ‘implausible history, geography, science, and literature of nineteenth-century America’. A group of mostly American professors, of varied seniority, based in the UK and the US, as well as Bell, a master’s student at Oxford, presented research to an audience of about twenty. Their papers powerfully demonstrated that strangeness itself holds a central place in American life, and that the weird and the outlandish offer a fresh, generative site for understanding the United States.

In a conference dedicated to alternative Americas, the specter of American imperialism appeared frequently. The alternative Americas described by conference participants dissented against homogeneous westward expansion in their own time, and they consequently complicate scholarly pictures of the myth of Manifest Destiny in ours. 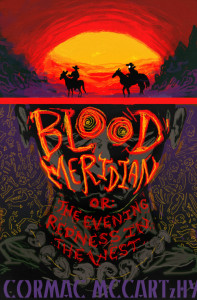 Pekka Hämäläinen (Oxford) launched Alt-American by claiming that colonial America was not particularly colonial—Europeans held only small, Atlantic-oriented settlements—and that the real empires in America were indigenous, potent confederacies in the Southeast, Southwest, and Great Lakes. The largest economic, cultural, and territorial expansions in North America up to the early nineteenth century were by these alternative Native American empires. On the same panel on Friday afternoon, Sarah Rivett (Princeton) argued that James Fenimore Cooper’s novels use Lenni Lenape in order to enfold Native American language and culture within a national narrative of America’s mythical past and prophetic future. The liminality of Cooper’s Natty Bumpo as a speaker of both English and Lenni Lenape, though, indicates Cooper’s reservations about a nation prepared to march westward, a counter voice to antebellum U.S. optimism.

On Saturday morning, Hester Blum (Penn State) and Jason Bell (Oxford) explored the history of polar exploration, illustrating the fundamental illegibility of the poles. Blum outlined explorers’ consistent inability to make sense of the poles, from British expeditions that insisted on using ponies instead of sled dogs—the ponies died, despite their pony snowshoes—to contemporary U.S. military manoeuvres attempting to use cars. The ‘tragedy of the ponies’, as Blum put it, represents a basic failure to adapt to polar extremity, allowing us to know the poles in only peeks and glimpses, like the nineteenth-century shipboard newspapers Blum’s work examines. Bell placed Antarctic exploration in conversation with the American Midwest, showing how both regions were conceived in the early nineteenth century as concavities to be conquered. These unknown spaces generated highly speculative early capitalist economies, like the U.S. trade in seal fur. For Bell, literary works like ‘The Rime of the Ancient Mariner’, with their weird grinding ice, signal the strange process of commodification by which living animals get turned into gold and silver coins.

From the Northwest Passage and the global seal trade the conference moved to American relations with the Pacific. Ed Sugden (King’s College London) argued that in Moby Dick’s loom of time passage, Melville models chance and contingency. The nineteenth-century ship deck represented what Sugden called a heterotopia, a contingent space of its own separated from global capitalism, heterosexual norms, and regulated time. As scholars, Sugden suggested, we need to recognize the contingency of the world that came to be, and the many alternative futures that might have been. Hsuan Hsu (UC Davis) likewise examined time. He argued that in A Connecticut Yankee in King Arthur’s Court, Mark Twain uses anachronism to show that forcing other nations to modernize results in violence, while in Wu Chih Tien, Wong Shin Foo shows how China was already modernized in the second century BCE. Twain and Wong used the same illustrator, and both novelists resist racist, imperialist impositions of modernization. 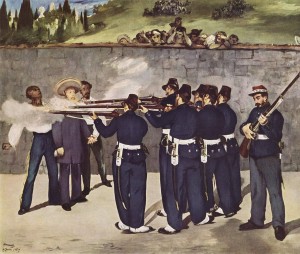 María del Pilar Blanco (Oxford) discussed how the astronomical and spiritualist theories of the French pseudoscientist Camille Flammarion were taken up in Mexico in the decade after Emperor Maximilian’s execution in 1867. Flammarion offered a model of amateur science that blended a spiritually deep world with empirical observation This mixed scientific and spiritualist discourse became a major rubric for Mexican writers looking for a unique form of modern Mexican individualism.

Lloyd Pratt (Oxford) and Michelle Coghlan (Manchester) closed the papers with a panel on print culture and feminism. Pratt talked about a common reader of Emerson quotations, Through the Year with Emerson, compiled by his great-grandmother Blanche in Arkansas in 1923. Through the Year with Emerson quotes Emerson saying that all minds make up their world by quoting, and a woman making her world by reading the New England abolitionist in Jim Crow Arkansas offers a perhaps different take on self-reliance. Coghlan described a more overtly radical feminism, looking at how the American press used images of petroleum-throwing women from the Paris Commune in 1871 to frame American feminists as dangerous anarchists. Coghlan said that Sarah Morgan Piatt’s poem about a female Communard’s execution subversively identifies an American mother with the woman being executed, pointing toward a more radical new woman.

The conference concluded with a roundtable on the risks and opportunities of nineteenth-century Americanist research. The conversation touched on many issues, from archival techniques to the meaning of imperialism, but most importantly queried the extent to which researchers should identify with historical subjects, keep them at bay to preserve their alterity, or seek a space for bearing historical witness. This methodological question remains in flux, unique to each project, from Pratt’s autobiographical criticism to Sugden’s work on obscure alternative futures. For my own part, I hope that more autobiographical essays like Pratt’s and more speculative research like Bell’s emerge in scholarly discourse, offering different approaches to alternative histories. Bell should be commended for convening a tremendous conference to do just that, challenging a distinguished group of critics, temporally and geographically dislocated from their subject at a conference in twenty-first-century England, to read the many implausible realities of nineteenth-century America.

Andrew Lanham is a DPhil candidate at Oxford, working on ethics and religion in contemporary North American fiction. His writing has appeared in the Los Angeles Review of Books and its partner Marginalia Review as well as landthatilive.com.
View all posts by Andrew Lanham →
Tagged  C19, Politics, Popular Culture.
Bookmark the permalink.