The 25th Annual Conference of the American Literature Association won marks for location. The Hyatt Regency Hotel was around the corner from the Washington DC’s National Mall, housing many of America’s most important and symbolic buildings and monuments – a fitting setting for a four day conference that attempts to span the full breadth of American writing and which took place just before the Memorial Day Weekend.

The ALA is a rather strange beast. It has no direct membership: one gains affiliation by being a member of one of the various author and studies associations that sponsor its conference panels. This makes for a diverse conference programme in which every field from Asian-American Literature to Early American Studies, and from Children’s Literature to Reception Studies found some representation.

The panels I attended leant towards my research interests in the nineteenth-century, and yielded some excellent research and provocative questions directed towards the field. In the Nathaniel Hawthorne Society’s panel on Surveillance and Privacy in Hawthorne AnaMaria Seglie (Rice University), Scott Reznick (Boston College) and Rachel Boccio (University of Rhode Island) constructed productive works by positioning Hawthorne’s work against contemporary national anxieties over Catholicism and David Rosen and Aaron Santesso’s recent study of literature and surveillance, The Watchman in Pieces. In the Society’s other panel, on imaginative correspondences between Hawthorne and Melville, Abby Goode (Rice University) offered a revision of sustainability in both writers, arguing that they both critique the fantasy of demographic homogeneity at the core of the Jefferson ideal of sustainable agrarianism. In his paper, Bradley King (University of Texas – Austin), explored how 1940s readings of the Hawthorne-Melville relationship articulated anxieties over both same-sex love and the state imposition of heteronormativity. 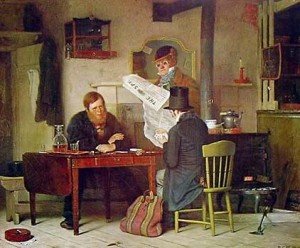 The Melville Society’s panels explored fertile areas in Melville Studies: his Poetic Discontinuities and his Politics of Print. Papers in the first panel showed the myriad of approaches to which Melville’s poetry responds. Two panellists discussed Melville’s Battle Pieces: Eric Meckley (University of North Carolina – Chapel Hill) demonstrated how the collection echoed the Civil War poetry anthology of Richard Grant Wright, before Anneke Schwob (UNC – Chapel Hill) argued that Melville’s use of astronomical images creates a polyvocality of perspectives in the poems. Finally, Sandra Leonard (Indiana University of Pennsylvania) spoke on Melville’s poetic persona as a confidence man who ultimately asks for trust from his readers.  My own paper, which appeared in the Politics of Print panel, explored how Melville uses aspects of the form and material text of the periodical to create a new form of originality in The Confidence-Man: one based in reproducibility and multiplicity, rather than the single authentic object, and which embodies the dynamics of urban modernity. This was complemented by Jarad Krywicki’s work (University of Colorado), which reminded us that many more readers would have seen ‘The Town-Ho’ chapter of Moby-Dick in Harper’s Magazine than in the novel itself, analysing how these multiple printings interweave with the tale’s layers of narration and reception. David Dowling (University of Iowa) then discussed online Melville reading groups to challenge arguments that the internet promotes superficial engagement with texts.

The panel on Aesthetics in Early American Studies suffered from being scheduled at 8am, meaning that many missed Edward Cahill’s impressive analysis of the manifold uses – and perhaps misuses – of the term ‘aesthetics’ in Early American Studies: Cahill suggested that in order to be truly useful, the term needs to be explicitly defined to mean something more than simply our own critical experiences of pleasure and form in a text. This was complemented by Lauren Klein’s insightful use of Franklin and Priestley’s data visualisations to propose that the eighteenth-century could educate us on the artificiality of dividing aesthetics and information, especially in the digital humanities. 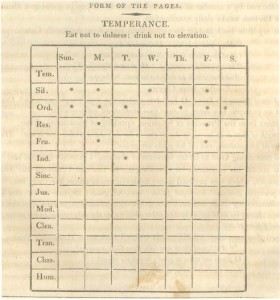 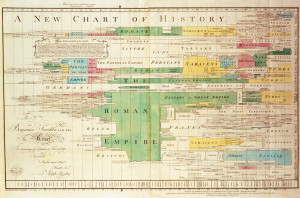 Ed Larkin finished the panel with a provocative argument that the concentration of research fellowships at institutions like the American Antiquarian Society and the Library Company of Philadelphia, which the majority of those academics offered (the very few) tenure track appointments in Early American Studies have held, pressured early career researchers into archive-based, often historicist research and away from issues of aesthetics. This was happening despite the fact that many Early American historians wanted literary scholars to focus more closely on form and aesthetics, in order to help augment their understanding of the period. All that was required to complete the panel was a larger audience to take up the important questions it raised: the extent to which knowledge is determined by financial forces, the identity of literary studies as a distinct discipline, and how aesthetics and the archive might be combined.

Another stand-out panel was the ProQuest and Research Society for American Periodicals’s Prize Winners’ Roundtable, which showed the fruitful work that can be done with periodicals across disciplines. Charlton Yingling (University of South Carolina) investigated how early black newspapers used the Haitian Revolution to fashion positive narratives of African-American identity, whilst Melissa Wren (Harvard Art Museums), coming from an Art History background, explored how print representations of the 1913 Armory Show shaped the cultural memory of the exhibition. Ryan Cordell (Northeastern University) concluded the panel by analysing the benefits and limits of digital periodicals research to trace circulations of texts, especially critically neglected texts such as “list-icles”, in order to understand the importance of these genres in nineteenth-century America.

The excellent work on periodical studies in the ProQuest panel highlighted the limitations in some other approaches to the topic. Papers in the panel on Print Culture in the American Renaissance suffered from not sufficiently locating relatively minor publications within the wider culture of print, and a lack of grounding in recent and influential scholarship on the cultural power of reprinting in the antebellum period. Moreover, the author-centric approach to panels (although praised by some delegates) sometimes led to papers feeling a little insular. More broadly, such an approach might be seen to be at odds with the turn away from the author and towards issues of circulation, reprinting and oral cultures in research in nineteenth-century American Studies. Indeed, the most successful panels situated authors in relation to wider cultural or critical trends, or established productive comparisons between authors, such as the panel on Walt Whitman and Louisa May Alcott’s representations of Civil War nursing.

The conference ran to a packed schedule. Sessions were scheduled continuously from 8am until 6pm, and with as many as ten panels running simultaneously there was much to choose from. Without plenary lunch or coffee breaks, it was difficult to continue discussions of the important and interesting issues raised in panels: leaving a room meant dashing through the warren-like Hilton to find your next session. This was a pity, as the ALA is certainly a friendly gathering: allowing more time to capitalise on this geniality would have benefitted the many young and independent scholars in attendance.

The papers I heard at the conference suggests that, despite a wealth of scholarship being published in recent years, there is still much to be uncovered in print culture studies – my own research specialism – especially in terms of combining this kind of scholarship with analysis of literary form. The aesthetic turn has still refused to fully emerge after two decades of waiting. But we seem to be moving towards an interrogation of what we want such a turn to achieve, and, by extension, what literary studies should do, especially in light of the current “crisis” in the Humanities. Similarly, digital humanities is moving into a self-reflecting phase: digital papers leaned towards weighing up benefits and drawbacks of this form of study, or asking what we want digital humanities to tell us, rather than simply showcasing projects. Finally, what stood out from the conference was the breadth of American literary studies, both in terms of approaches, historical periods, and geography. There seems to have been no waning in Trans-American Studies (transatlantic, transpacific, transcontinental and more), with the borders of American Literature stretching ever further.

Review: HOTCUS Postgraduate Conference, 'Endangered America: Processing the Threat of Annihilation’
Review: Faulkner and Yoknapatawpha 2018: Faulkner and Slavery
"The Greatest Infomercial in Political History”: A Presidency in the Age of Entertainment
Book Review: South Side Girls: Growing Up in the Great Migration by Marcia Chatelain
Review: HOTCUS Postgraduate Conference, 'Crossing Boundaries: Challenging American Norms During the ...
My Research: Juliet Williams
Patient Zero and the Making of the AIDS Epidemic by Richard A. McKay
Book Review: FDR in American Memory: Roosevelt and the Making of an Icon by Sara Polak

Katie McGettigan is a Leverhulme Early Career Fellow at the University of Nottingham. She is completing a monograph called Herman Melville and the Material Text, and is also working on a new project about the British publication of American literature, 1830-1860
View all posts by Katie McGettigan →
Tagged  C19, Visual Culture.
Bookmark the permalink.