Home » Reviews » Book Reviews » After Katrina: Race, Neoliberalism, and the End of the American Century

After Katrina: Race, Neoliberalism, and the End of the American Century

Over the last decade, Anna Hartnell has unofficially established herself as the UK’s leading academic on Hurricane Katrina. Her credentials include organizing a paired set of conferences in New Orleans and London on Katrina-related affairs, maintaining a Katrina-oriented blog, and writing multiple articles on visual/cinematic “Katrina texts”. Sadly, her full book-length study of Katrina falls short of its full potential.

In a nutshell, Hartnell’s argument is that New Orleans has come to embody an “interruptive temporality” (p.20) that resists both the fantastical “American time” of a dying American Century, and the nightmarish “Katrina time” that is the current age of neoliberalism. Hartnell terms this interruptive temporality “New Orleans time”, and argues that the post-Katrina city itself, embodying this temporality as it does, offers alternatives to the narrative of self-destruction that haunts contemporary projections of America’s future.

Chapters 1 and 2 look at New Orleans through the lens of American time. Chapter 1 discuses how over time and particularly over the American Century, New Orleans has been positioned, by dint of its perceived exoticism in its national context, to illuminate the United States’ quasi-imperialistic violence towards non-American territories, as in Haiti after the devastating 2010 earthquake there. Chapter 2 discusses how practices of tourism have associated New Orleans with narratives of backwardness and decline, and how those practices have abetted efforts to monetize and “Americanize” the city’s distinctiveness.

Chapters 3 and 4 look at post-Katrina New Orleans through the lens of Katrina time. Chapter 3 discusses how certain Katrina documentaries resist Katrina time and the propaganda and paradigms of disaster capitalism. Chapter 4 discusses the winnowing of the public sphere across Katrina time, particularly in terms of housing and schooling, and discusses further how notions of the “right to return” have informed citizens’ kickback against this winnowing process in post-Katrina New Orleans.

All told, After Katrina succeeds in selling its thesis. It caters well for people who know nothing about Katrina, touching on key critics, themes, and case studies in Katrina discourse. The fourth chapter’s discussion of housing and schooling is especially impressive as a primer. The text caters creditably, too, for those interested in the cultural response to Katrina, drawing both established and lesser-known works of Katrina culture from across film, theatre, and literature. In the fifth chapter in particular, Hartnell draws texts together in a strikingly sui generis and productive way. And her consideration of Katrina in relation to the 2010 Haiti earthquake (ch.1) attests very much — and valuably, given the scantiness of such considerations elsewhere — to how fruitful comparative studies of those disasters can be.

For all these virtues, though, After Katrina suffers from an endemic problem with clarity. This problem manifests in the main as a haziness of chapters’ through-lines. The second chapter in particular reads like a series of interrelated concepts — tourism, plantation tours, gentrification, native/transplant citizen tensions — in search of a unifying analytical through-line. Similarly, a discussion of sustainability and the Lower Ninth Ward in the fifth chapter, whilst interesting per se, is only semi-salient to the specific stated aim of that chapter. No small part of this haziness is the unalleviated vagueness of the nature of “New Orleans time”: an “interruptive temporality” yes, but after the introduction it is defined much less in its own right than in relation to American time and Katrina time. Certainly, we learn that it registers environmental “slow time” (ch.5); embraces the end of liquid modernity (ch.6); and defies pervasive U.S. cultural maxims of “time is money” (ch.2). Ultimately, though, this notional “temporality” becomes no more concrete than a floating spider-diagram of characteristics.

As well, although lucid per se, some of Hartnell’s analyses fail to cohere with the chapters in which they feature: in the contexts of those chapters and their overarching arguments, they seem confused. The analysis of film documentary Trouble the Water in the third chapter counts here: Hartnell spends 90% of it arguing that the film has an ambiguous relationship to Katrina time and indeed reiterates the classic bootstraps narrative, then effects one shuddering volte-face of a paragraph to address how the film ultimately resists neoliberalism. Such confusion holds court as well, and at length, in the sixth chapter. Its first two featured textual analyses, of Joe Sacco’s Days of Destruction, Days of Revolt and the serial drama Treme, address not how these texts register New Orleans time, but how these texts attest to the “death of cities” under Katrina time. To this reviewer, call him cynical as you may, these analyses seem to serve only to bulk out a chapter whose argument hangs on a single novel, Moira Crone’s The Not Yet.

All told, After Katrina is a creditable and informative work that obscures its richest veins of material. A good argument lies like a Leviathan at the bottom of these textual waters: it’s just a pity Pierre Aronnax himself might struggle to track it down. 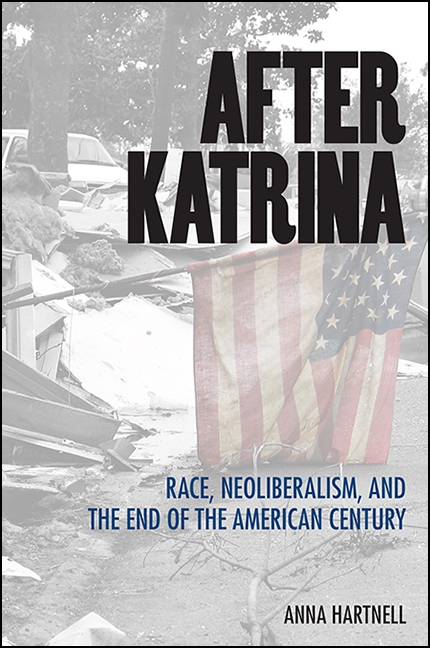 Pat Massey is a first year PhD at the University of Manchester, in English and American Studies. His project title: 'New Orleans Exceptionalism in the Cultural Response to Hurricane Katrina'. His supervisors: Drs Natalie Zacek and Douglas Field. His handle: @MassalinesSt.
View all posts by Patrick Massey →
Tagged  C21, Geography, Neoliberalism.
Bookmark the permalink.