Our first interviews will be with the U.S. Studies Online Editorial team so you can get to know a little more about us.

I’m in the American and Canadian Studies postgraduate office in the University of Nottingham.

I would follow the 1870s Presidency campaign of Victoria Woodhull, the first woman to run for President. Although, admittedly, this is one of the least interesting things she ever achieved. She was also an Equal Rights protester, a rags to riches “magnetic healer”, a Wall Street stockbroker on the New York Stock exchange and a newspaper editor whose publications saw her arrested on obscenity charges. 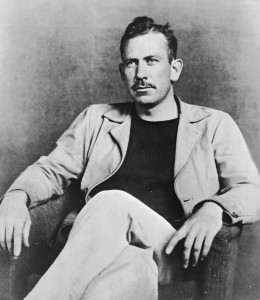 I have put far too much thought into this: spy Virginia Hall, best buds Harper Lee and Truman Capote, the funniest comedian, ever, Paula Pell, social reformist writer John Steinbeck (who is also, coincidentally, the most handsome male writer in the history of literature), actress Michelle Williams (just because I think she’s adorable), and comedian Mitch Hedburg.

I would invest in a poetry collection because novels ‘end’ — Imagine reaching the last page of a novel without rescue in sight. Grim.

With that in mind, H.D.’s Trilogy or the aptly titled edited collection, Staying Alive: Real Poems for Unreal Times.

Opening that AHRC email.  I never expected it, and it’s impossible to beat. But I also had some great moments at the annual Popular Culture Association conference in 2013, which doubled as my first ever paper presentation in the United States.

I’m not really in the position to give advice to early career academics, but there is one piece of advice that has stuck with me courtesy of Professor Susan Bassnett, the first woman pro-vice chancellor in the UK: be generous, be organised and don’t be afraid to publish small.

I’m in the process of planning a holiday to Boston and New York, so that’s pretty exciting!

I developed an interest in representations of starvation and subjectivity in literature and culture, which led me onto fatness in fiction. I quickly realised there was no escaping a U.S. emphasis for the project I wanted to do, so I decided to move away from my background in British Literature and apply for a place on an American and Canadian Studies programme. It turns out this was a great decision.

It would make sense for me to go into publishing or project management, but I would also love to work with an art gallery and put my two cents into touring exhibitions. In college I studied art at A level and then moved on to an intensive one year Foundation Diploma programme in Art and Design, which was the best year of my life so far. Even now I spend far too much time sniffing out new exhibitions or writing about art (outside the thesis).

The Joy of Eating: The Virago Book of Food.

Months? I ran out of shelf space.

What’s in your fridge right now?

Cheese, butter and other people’s stuff. I live between three places so keeping a stocked fridge is impossible. Plus I’m unreasonably decadent for a postgraduate and I like to eat out in restaurants when possible.

Michelle is an AHRC-funded PhD researcher in the American and Canadian Studies department at the University of Nottingham. Her current research examines representations of fatness and “obesity” in late twentieth-century and twenty-first century North American fiction. Michelle’s wider interests include medical moral panics, gender and genre theory, and contemporary Anglo-American writing. She is a former co-editor of U.S. Studies Online (2014-2016) and continues to run the feature #bookhour. She is also the web editorial assistant for the British Association for American Studies (BAAS), and the web editor for the European Association for American Studies (EAAS) and the European Journal of American Studies (EJAS).
View all posts by Michelle Green →
Tagged  C21, Contemporary Fiction, Gender and Sexuality.
Bookmark the permalink.