Dr. Lydia Plath and Dr. Gavan Lennon are the organisers of the 62nd Annual British Association for American Studies conference, to be held at Canterbury Christ Church University, 6-8 April, 2017. Registration is now open. Members’ registrations booked before 1 March 2017 will receive an “earlybird” discount. For the latest updates follow @BAAS2017. 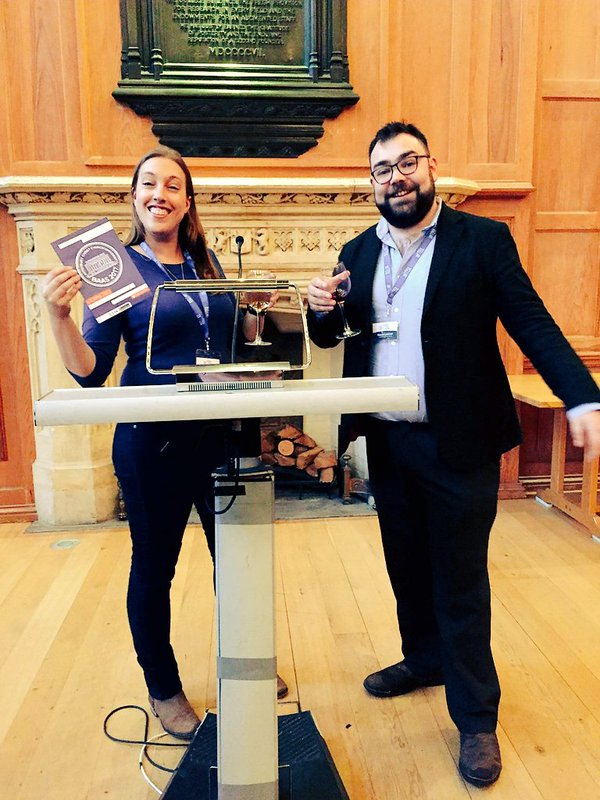 Lydia – I’m sitting on a sofa in Worcestershire.

Gavan – Under a large poster of Ralph Ellison’s Invisible Man in Canterbury.

What can delegates expect from this year’s BAAS conference?

Lydia – I like to think we’re keeping all the good parts of BAAS conferences past, but adding some new and exciting features for delegates in Canterbury this year. For example, this year for the first time we will have a conference app, so that delegates can plan their way through the conference panels and keep in touch with each other through in-app social networking. I’m also particularly proud of our commitment to gender equality this year, and our policy against “all-male panels”. I’m pleased to say that we have been able (so far) to create a programme in which there is at least one female speaker on every panel – now let’s just hope that no one drops out!

Gavan – I agree completely with Lydia! The app is going to be really cool and the commitment to gender equality is so important. There were a lot of difficulties in putting the schedule together, but avoiding ‘manels’ wasn’t one of them. I also think there’s a great balance of disciplines in the schedule, which was very important to both of us.

What inspired you to organise this year’s BAAS conference?

Lydia – The idea to have a BAAS conference in Kent originated, as many good ideas do, in a pub (which we were subsequently kicked out of for discussing our plans with too much enthusiasm!). It was predominantly the brainchild of Michael Collins (Kent), Zalfa Feghali (previously CCCU, now Leicester), Nick Witham (previously CCCU, now UCL-IA), and myself (previously CCCU, now Warwick). As you can see, most of the original conference team have now moved on to new institutions, which has caused some interesting logistical challenges, but luckily we still have Gavan Lennon on the ground at CCCU.

Gavan – I feel quite lucky to have come along just in time for the fun bits! I always love the BAAS conference every year and I’m thrilled to be a part of organising one.

What is the most exciting thing you have planned for the conference?

Lydia – There are so many! I’m really looking forward to the three plenary speakers, Brian Ward (Northumbria), Marjorie Spruill (South Carolina) and Trudier Harris (Alabama), not least because all three will be speaking to their expertise in Southern history and culture, which is my field of expertise. I am also very excited for the final session on the Saturday, which will be a Women’s Network Event: an opportunity to discuss and promote the role of women in American Studies with speakers including former BAAS Chair Sue Currell (Sussex).

Gavan – I’m tempted to say ‘free wine,’ but that doesn’t sound too ambitious. I’m a Southernist too, so I’m really excited about all the great papers and panels on southern literature and culture that we have lined up. I also think the city itself is going to be a great venue for the conference; we have arranged free access to the stunning Canterbury Cathedral and its grounds for every delegate. There are some equally stunning local pubs that we’re all likely to colonise.

What has been your favourite part of planning the conference so far?

Lydia – Putting the programme together. I really enjoyed reading all of the brilliant proposals that we received, and I relish the jigsaw that is putting panels together. It was difficult to fit some really good papers in, though – so my tip for future delegates is to try to arrange your own panel!

Gavan – Again, I have to agree with Lydia. If you want to find out what kind of great work is being done in American Studies in the UK just get everybody to send you 250 words of their latest work! I also really enjoyed making up names for the panels, though I held back on making all the puns I wanted to.

…and your most challenging?

Lydia – Keeping the programme together! What happens is you create a lovely first draft, and then certain speakers are unable to attend, or panels need to be moved to fit in with speakers’ other commitments. So we have to decide whether to keep a few two-paper panels, or to move people to panels that may not fit together so well: it’s a rather delicate balance.

Gavan – Having to turn down some really outstanding work. We had to be a little brutal this year because of time constraints. That meant saying no to some papers that I really wanted to see.

If you could invite any historical or academic figure as a keynote speaker, who would it be?

Lydia – Well I’m writing this in the wake of Donald Trump’s somewhat bizarre remarks about Black History Month, so I have to say Frederick Douglass comes to mind! In seriousness, I would have loved to have had the opportunity to hear Douglass speak – his rhetoric on the page is so powerful, it must have been amazing in person.

Gavan – Can I go to Lydia’s Douglass conference? People who know me would expect me to say William Faulkner, but I don’t think he’d bother to show up and he definitely wouldn’t be sober, so I’d invite Carson McCullers instead. She’d be just as drunk, but nicer about it.

You’re stuck in an elevator with the contributors to one panel for a few hours, if you had to pick one, which would it be?

Lydia – it has to be the “‘The room where it happens’: Americanists on Hamilton” roundtable, in the hope that they know enough of the words to the soundtrack to keep us entertained for a while!

Gavan – “American Architecture: Constructive Readings in Fiction, Film, and Memoir.” They might have enough expert knowledge to get the bloody lift working again.

What advice would you give to conference-organisers-to-be?

Lydia – Two things: first, hire administrative support as part of your conference budget. Our administrator Becky Newton has been so wonderfully helpful; I don’t think we could have done this without her. Second, take on all of the advice of the BAAS Exec, especially the Conferences Subcommittee. Paul Williams, Jenny Terry, and Sinéad Moynihan, as well as the rest of the BAAS Exec, have been incredibly helpful. Oh, and one more thing – don’t let your colleagues (or yourself) start new jobs until after the conference takes place!

Gavan – Co-organise with someone from a different discipline: you can delegate responsibility for certain panels, but still due it out over who gets the really fascinating interdisciplinary stuff!