Christina Westwood is a PhD candidate in English Literature at Keele University and the new USSO Book Reviews Editor for 2018-2020.

In my garden, enjoying a wonderfully sunny early summer’s evening. 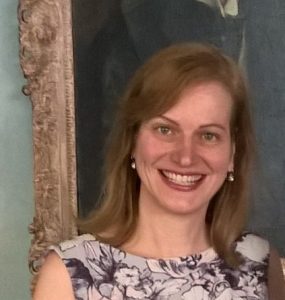 I would time-travel to Massachusetts in 1621 to witness the peace treaty between the Wampanoag and the Pilgrim settlers. Alternatively, I would like to witness the Freedom Rides that left Washington D.C. in 1961 or travel to Oakland in 1935 to see Amelia Earhart land after her flight from Hawaii to California.

Tisquantum, Maya Angelou, John Steinbeck, Harper Lee, Tennessee Williams and Arthur Miller, as well as Francis and Zelda Fitzgerald. And of course, I would love to chat to the authors whose works I investigate for my PhD. Dorothy Parker would also be on the guest list as her wit would enliven conversation even more.

Either the collected poems by Maya Angelou; some short stories by Richard Yates or F. Scott Fitzgerald; or A Streetcar Named Desireby Tennessee Williams. Perhaps I would succeed in sneaking all these titles onto the island!

Being given the keys to my first classroom indelibly impressed on me what a privilege it is to work in education.

Seize all opportunities to immerse yourself in new things, even if there is no immediate academic goal in sight. Study for the enjoyment of it and remember to learn not only from colleagues in academia but also by retaining an open, curious mind.

I look forward to becoming Book Reviews Editor for U.S. Studies Online as I love reading, reviewing and handling books. I also look forward to more PhD writing and some European travel with my family over the summer months.

I completed a Masters dissertation in American literature which investigated masculine guilt in four plays by Arthur Miller. I have since become interested in literary geographies, city writing and New England literatures, so I decided to pursue a PhD in this area.

Without a doubt the collections at the British Library where the Eccles Centre’s fabulous team have always made me so welcome. As a Visiting Postgraduate Fellow, I have spent dedicated research periods there this year which have proved invaluable.

I love my job as a teacher of literature and languages but another career that might have interested me is that of a literary agent specialising in fiction.

Paul Theroux’s Deep South, along with some poetry by Walt Whitman and Anita Shreve’s last novel before she passed away earlier this year. It is called The Stars are Fire.

Each of these books: three or four days at most.