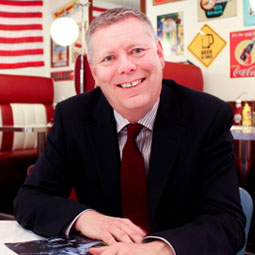 In my office at Northumbria University: 4th floor, nice view, something approaching sunny outside.

To Miami Beach, February 18, 1964, when the Beatles met Muhammad Ali, then Cassius Clay, in his training camp as he prepared to take on Sonny Liston for the world heavyweight boxing title.

A toss-up between discovering lost footage of Martin Luther King giving an impromptu speech in Newcastle and getting the advance copy of my first book, Just My Soul Responding – oh, and being elected BAAS chair, of course.

Work towards becoming mid-career academics as quickly as possible, but never forget the challenges you faced getting there! Seniority has its own peculiar demands, but completing a PhD, trying to find a secure job, getting out those first publications and then trying to come up with a second project are daunting prospects for early career academics. That’s why BAAS is committed to helping members navigate those particular hurdles, putting on an increasing number of professional workshops around things like funding, publishing, impact, Open Access, REF and teaching. There are a lot of seasoned campaigners out there, so I’d advise ECRs to make full use of that experience and expertise.

I’m doing something with the British Library and Eccles Centre in early July to mark the 40th Anniversary of punk in the UK. Not sure if I can reunite my long lost — but never missed – band, Wilton and the Shagpiles, but I’m excited to be part of a discussion of the Sex Pistols’s ill-fated US tour.

Hmmm, that pre-supposes I currently have a single area of research, when I’m juggling several projects. I’m a media-popular culture brat, so no matter how hard I try, I rarely escape working on music and the media for very long. I’m just finishing a big, co-authored book on Artists and Repertoire men – and a handful of amazing women — in the early roots music recording industry (the Simon Cowells of blues and hillbilly). I’m also beginning to work on a medical humanities project on disease, disability, dying, and death in the US South.

I guess I once had fairly typical pipedreams of being a musician/footballer/cricketer, but was cruelly stymied by a lack of talent. Is being retired a profession?

Review (Part One) of IAAS Annual Conference
Zora Neale Hurston: Life and Works
"Right to Try" (Again): A history of the experimental therapy movement
Mirroring the Medium: Depictions of Female Domesticity in ‘WandaVision’
The Lady Vanishes: American Women Writers and the Noir Canon
Meet the Curator: ‘Show Me the Money: The Image of Finance, 1700 to the Present’
Book Review: Mindful America: The Mutual Transformation of Buddhist Meditation and American Culture ...
Storify of our #bookhour twitter chat on "Herland" by Charlotte Perkins Gilman

Professor Brian Ward is Chair of the British Association for American Studies (BAAS) and Northumbria University’s first Professor in American Studies. Brian has published widely on the modern US South, with interest also in various aspects of Anglo-American cultural relations, the civil rights movement, popular music, and the 1960s. Throughout his career he has been awarded with many awards and grants, including the Leverhulme Trust Research Fellowship and an AHRC Research Network Grant.
View all posts by Brian Ward →
Tagged  C20, Interviews, Music, Popular Culture.
Bookmark the permalink.