Sage Goodwin is a DPhil candidate in History at University College, Oxford and USSO’s new Social Media Editor for 2018-2020.

At the moment, I’m at my favourite desk in the library of the Rothermere American Institute’s library in Oxford. I pretty much live here. 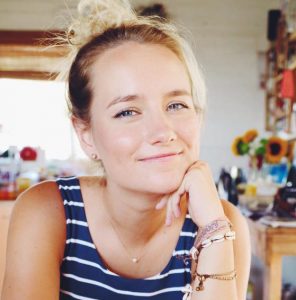 With my research hat on it would have to be in the CBS newsroom either when they got the footage through from the attacks on civil rights protestors on the Edmund Pettus Bridge on Bloody Sunday in 1965, or when word came in about the assassination of Martin Luther King Jr. in 1968. I’d love to see the decision-making process that went on about how to break those stories to the nation on the evening news and who they were trying to talk to about them. For fun, it would probably be any night at Studio 54 in the Andy Warhol era.

Well, I challenge you to find a South African that wouldn’t say Nelson Mandela. He’d be pretty high up on my list. Martin Luther King Jr. would be there as well. Marilyn Monroe and Walter Cronkite or Dan Rather. They’re all people who have this incredible charisma which is so central to why they achieved what they did. You can see it on screen so I’d love to experience how high-voltage that must be in real life. I’m hoping to interview Dan Rather, so maybe I will get to. Oh, and Stanley Tucci, because I love him and he apparently loves a dinner party.

I’ve recently gotten really into Desert Island Discs. I’ve been going through their back catalogue so I’ve actually given this question quite a lot of thought. I’ve had Gone with the Wind on my bookshelf for years and never got around to reading it, so probably that.

I think, as boring as it sounds, the very first step: getting into Oxford for my undergrad. At the time, it seemed like this impossibly unattainable thing. So that’s probably been the greatest sense of achievement I’ve had.

Don’t take no for an answer and never give up at the first hurdle. There’s often some way around things if you just find the right person to plead your case to. And always send handwritten thank you notes to the people that help you.

A road trip starting in LA and finishing in Austin where I’ve just been given funding to do a month of research this Summer.

I’ve always been interested in how people form their ideas about race, especially under segregated conditions. I started off looking at domestic service. Then, due to the problems of sources, I switched to entertainment and narrowed in on television, and then television news when it became apparent that hardly anyone has written about civil rights coverage – despite it being widely recognised at America’s first major national news story. Totally separately from my academic life I’ve also always been very interested in behind the scenes production in film and television as well as the general aura and style of 1950s and 1960s America. So all of those things have inadvertently come together for me.

I’ve been pretty lucky so far. The Paley Media Center is incredible, both the LA center in Beverley Hills and the New York location in Manhattan. Last time I was there the Director showed me Bill Paley’s office. I sat at the desk where he signed the contract for I Love Lucy (a poker table) and got to hold his Lifetime Achievement Emmy. That was very cool.

I’m a part-time illustrator. If the whole academia thing doesn’t work out I’d like to attempt to take my business full-time.

The Girls by Emma Cline

Actually only since this weekend. I don’t read that much fiction when I’m doing secondary reading for my DPhil; I’d rather watch TV to relax. But I’m working on some writing at the moment so it’s been nice to get back into some reading for pleasure.