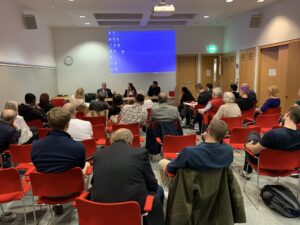 The joint colloquium brought a diverse audience to the British Library’s Foyle Room.

The APG Colloquium was held in person for the first time since 2019, and what a wonder it was to see everyone in the room again at the British Library. The Colloquium was based around the theme of the United States’ mid-term elections which were held on Tuesday 8th November. This offered just enough time for the academics, members of the public, and former Congressional representatives at the Colloquium to get their heads around the patterns of results emerging from election night, with the ‘Red wave’ seemingly failing to materialise as predicted, and many of former President Trump’s favoured candidates struggling in Senate and gubernatorial races. Hosted by the American Politics Group (part of the Political Studies Association) in conjunction with BAAS, the event was held in the British Library in a return to tradition. The team from the Library’s Eccles Centre for American Studies, which holds one of the preeminent collections for the study of US politics in the UK, supported the event’s organisation and hosting.

The afternoon event kicked off with an insightful keynote by Dr Richard Johnson, Senior Lecturer at Queen Mary University of London, discussing the meaning of the mid-terms. This went beyond the usual understanding of ‘meaning’: Dr Johnson engaged with the implications of the word ‘mid-term’, showing that until the 1880s this language was never used to describe off-cycle elections. He delved into the connotations of this development – that given Congress was intended to be the central point of power in the US government, describing one of its elections ‘in relation to’ or in the ‘middle of’ the executive’s election cycle indicated that Congress was being positioned in relation to the presidency. By researching newspaper editions, he found that the regular use of ‘mid-term’ to describe these elections began in the 1920s and 1930s, coinciding with the Budget and Accountability Act of 1921 and President Franklin Roosevelt’s executive expansion in the 1930s, both points at which Congress ceded ground to the presidency. Dr Johnson then discussed the themes that tend to emerge from mid-term elections; how they can be seen as referenda on the sitting president; and the impact that a divided government that typically follows a mid-term can have in hampering presidential agendas. However, the standout theme was how he took the lecture title of the ‘meaning behind the mid-terms’ and focused on the discourse and the pivot from a congressional-focused government to one centred on the executive. His keynote offered a refreshing take on what could have been a formulaic overview of the history of previous mid-term elections and their impact.

Abortion was perhaps the critical issue of the mid-terms. Pro-choice protests at Foley Square in New York, May, 2022, Wikicommons.

A roundtable followed, titled “Midterm Election Response”, and comprised of Inderjeet Parmar (Head of the Department of International Politics, City, University of London), Josephine Harmon (Lecturer at New York University), Daniel Rowe (Lecturer at the University of Oxford), and Thomas Gift (Associate Professor at University College London). The academics were asked to give a five-minute response to the question: “Well, what did that all mean, then?”. Needless to say, each spoke for longer than their allotted time – all had very different perspectives on the election results. Inderjeet Parmar had more questions than answers, a fair reaction before all the data was available from the results and the full political response from both parties not yet meted out. His main questions surrounded whether the mid-term elections had solved anything in terms of the parties’ futures, and if the elections marked an inflection point, or a continuation of the chaos of US politics since 2016. The answer: we need to wait and see. 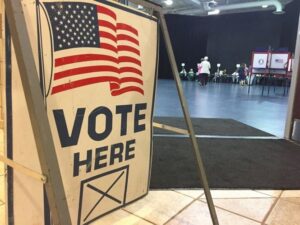 A voting location in Alabama during the 2017 election, Wikicommons.

Josephine Harmon was more optimistic in her outlook and saw the mid-term results as a return to rationality. I have to say I’m inclined to agree. Many of the candidates who promoted the ‘Stop the Steal’ narrative from 2020 suffered defeats in the election, showing voters were particularly attentive to protecting the democratic process. Josephine Harmon also raised the issue of what this election would mean for the Republican 2024 candidacy. Indeed, this was a spectre that loomed over the whole event: would Donald Trump be running in the next presidential election, or did these results mean the beginning of the end of ‘Trumpism’? Daniel Rowe argued that the old narrative of ‘it’s the economy, stupid’ did not play out this time, with the Dobbs result clearly impacting Democratic turnout where issues around abortion were on the ballot. As political commentators note, this mid-term seemed like a return to ‘localism’ rather than centring on national politics. This theme melded nicely with the imbalance between executive and congressional power discussed in Dr Johnson’s keynote, and raised issues around preconceptions of the mid-terms as a referendum on the sitting president. Finally, Thomas Gift discussed the reasons behind Republican underperformance, honing in on candidate quality and the implications for Trump’s campaign against the Governor of Florida Ron DeSantis for the 2024 Republican presidential nomination.

The final event of the Colloquium was a panel with former Congressional representatives Elizabeth Esty (D, formerly CT-5) and Rob Woodall (R, formerly GA-7). Their presence at the Colloquium was part of the Congress to Campus UK talk series, a programme organised by the Eccles Centre to bring those who have served on Capitol Hill to a UK audience. Both representatives were very candid when discussing their experiences working on Capitol Hill and reflecting on things that they found particularly rewarding and challenging about their times in office. A serious issue to emerge was politicians’ safety, particularly in light of the attack shortly before the mid-terms on Paul Pelosi, husband of Leader of the House Nancy Pelosi. Esty and Woodall discussed how they had to increase security at their offices in response to threats. They were both very generous with their time—the session lasted 90 minutes, with most of the time dedicated to audience questions. These focused on what made them decide to run for office, how Republicans and Democrats worked together in Congress, and how social media was changing how candidates across the House attracted attention and funded their campaigns. I was impressed by their openness, and whilst the audience was certainly respectful in their questions, they did not shy away from posing thorny issues to both former representatives. 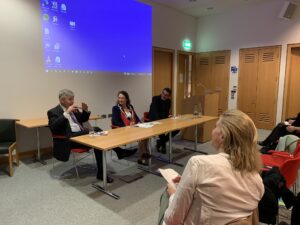 The audience is really what makes the APG Colloquium special. As in the previous years I have attended, it prioritises accessibility to those outside academia. With a £25 fee for the waged, and £5 for concessions, the event feels open to anyone interested in US politics. Some attendees come year after year, and some pop by once to see what all the fuss is about. What results is a mixed audience, with A-Level students attending alongside long-retired secondary school teachers and first-year PhD candidates sitting next to Emeritus Professors. Whilst the keynote speech was an academic talk, the roundtable of academics, and certainly the discussion with the Congressional representatives, were devoid of the jargon that can act as a barrier to non-academics. The APG 2022 Annual Colloquium offered a unique insight into the spectacle of the mid-term elections, bringing UK voices together with US politicians to ponder the role of these US elections and their implications for the trajectories of the Republican and Democratic parties.

A note from the Eccles Centre: Please find more details on the British Library US politics collections here: https://www.bl.uk/eccles-centre. In addition, their Visiting Fellowship programme, to support individuals wishing to visit London to use the British Library’s collections on the Americas, is currently accepting applications.

Review: ‘Teaching Histories of Race in America to UK Undergraduates: A Review Panel’, Rothermere Ame...
Review: Theorising the Popular 2017
Review: ‘The “Not Yet” of the Nineteenth-Century U.S.’, British Association of Nineteenth Century Am...

Emma Hall is a fourth year PhD candidate at the Department of Politics and International Studies at the University of Warwick. Her research focuses on the how an exceptional national identity is inculcated through the US education system, and the degree to which American exceptionalism is perpetuated in presidential rhetoric on domestic and foreign policy.
View all posts by Emma Hall →
Tagged  2022 Mid-Terms, American Politics, American Politics Group, British Library, Conference Review.
Bookmark the permalink.