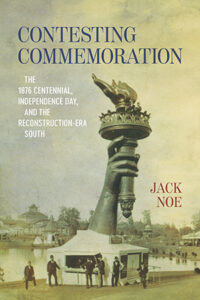 How does a nation celebrate itself when it is in many ways still at war with itself? Jack Noe tackles this question in his engaging study of nationalism and identity in the post-Civil War South through the lens of Independence Day celebrations and the Centennial exhibition held at Fairmount Park in Philadelphia, Pennsylvania in 1876.

Noe conceptualizes these commemorative events as performative and discursive expressions of U.S. nationalism. These, in turn, were highly contested, ranging from exclusive white Southern, especially Democratic Lost-Causers’ interpretations to more inclusive notions of Republican politicians and African American citizens. Accordingly, the author convincingly argues that the commemorative activities during Reconstruction served as a proxy for political battles between white southern reflections about sectional distinctiveness on the one hand and African American’s claim to full citizenship on the other hand. Both groups used commemorative events for political ends, the former to strengthen a racially exclusive identity, the latter to claim U.S. identity.

Noe has consulted an impressive collection of primary sources, from several archives throughout the South, digitized collections such as the African American Pamphlet Collection at the Library of Congress to 77 newspapers from large and small cities, including African American newspapers. He begins chronologically with covering the antebellum and wartime Fourth of July celebrations. While white southerners disengaged with the holiday’s nationalist message as it stood for a nation they no longer identified with, African Americans began to embrace the holiday (besides their celebration of Emancipation Day). However, after the Civil War, with the exception of some bitter die-hard Confederates, most white southerners began to re-engage with Independence Day. As the Democrats slowly regained political control, they celebrated and spread their own version of the American Revolution (Chapter 2). At the same time, white southerners tried to neutralize the African American use of the Fourth of July by stressing the racial trope of Black’s supposed inclination to violence and disorder. Noe uncovers the complex workings of public memory by zooming in on these competing groups as they were struggling to take a hold of the holiday and their respective place in both, the nation’s history and the current state of affairs. Noe adds nuance to the discourse on memory battles that we see continuing until today.

Over the next four chapters, the author traces how the (non-)observance of Independence Day and the Centennial in the presidential election year of 1876 triggered a fundamental debate over who embodied the ideals of the founders and hence, could lay claim to U.S. citizenship. The Centennial organizers hope was not only to show off the nation’s technological progress but also to emphasize reunion after the Civil War. However, in the end, the exhibition laid bare the polarized, partisan divide, displaying “a federation of states that was far from united.”[1]  African Americans saw the event as an opportunity to express their Americanness and to establish their place in the memory of the founding and development of nation. In contrast, to white southerners the fair was “Yankee humbug”, as put bluntly by an Alabama newspaper,[2] and something used for northern economic and political (i.e. Republican) gain. What followed was a highly emotional public debate around honor and racialized manhood, mostly led by men, though Noe also briefly discusses southern women’s sentiments as expressed in private correspondences. While the author might have run into the problem of finding these kinds of sources to further elaborate on the role of gender on (public) memory, he could have linked this to the prominent public role of women during Memorial Day celebrations that began during his time of analysis. As Memorial Day arguably became more militaristic over time, it was initially through mourning ceremonies that ladies’ memorial associations perpetuated the ideals of southern womanhood and the Lost Cause.

This minor criticism aside, Noe skillfully exposes the politics of representation and tensions through several local case studies such as the Texan controversy around the central figure of William Henry Parsons and the violent putdown of African Americans parading on the Fourth of July in Hamburg, South Carolina. In addition, Noe addresses the marginalization of African Americans at the fairgrounds which could be interpreted as a harbinger to Jim Crow. The planned Richard Allen Monument (a tribute to the founder of the African Methodist Episcopal Church) was destroyed during the transport to the fairgrounds; only the bust survived, which arrived in the last week of the fair, to be then “forgotten” in storage at Wilberforce College, Ohio, and returned to Philadelphia in 2010 – a “sad metaphor for African Americans’ experience of the Centennial,”[3] forecasting racial segregation in the South.

Overall, Noe’s analysis adds to the rich body of scholarly work on post-Civil War memory and commemoration that he also briefly mentioned in his introduction. However, as already discussed above, Noe could have engaged more with the existing scholarship on the Lost Cause. For instance, how was the reaffirmation of southern distinctiveness linked to Memorial Day celebrations, originally started as David Blight has shown by African Americans and then taken up by women?[4] Similarly, Noe’s analysis would have benefitted from a wider discussion of the evolution of emancipation celebrations such as Juneteenth in Texas.[5]

Notwithstanding, Noe’s well written study will appeal to anyone interested in memory and the legacy of Reconstruction, proving useful in both undergraduate and graduate seminars. Noe’s compelling work on the complex commemorative landscape reminds us that holidays are contested spaces over national loyalties and identities.  Contesting Commemoration showcases how the creation of a usable past mirrored and reaffirmed the socio-political divisions of the Reconstruction era.

Book Review: Stars, Fans and Consumption in the 1950s: Reading Photoplay by Sumiko Higashi
Book Review: The Jolly Corner and Other Tales by Henry James and N.H. Reeve
Book Review: Falling After 9/11: Crisis in American Art and Literature by Aimee Pozorski