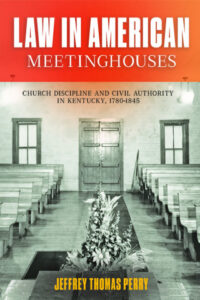 In the midst of the democratization of American Christianity, famously articulated by Nathan Hatch, and the explosion of new religious expressions and growth of previously suppressed denominations during the second great awakening, lay the individual stories of communities of believers attempting to negotiate life in a new republic.[I] In a work that dovetails nicely with that of Sam Haselby, Law in American Meeting Houses: Church Discipline and Civil Authority in Kentucky, 1780-1845 by Jeffrey Thomas Perry explores in depth that world in the west; a space where law, authority and religious identity were fluid and in the process of being forged and reforged.[II]

The strength of Law in American Meeting Houses is its deep dive into the disciplinary records of (mainly) baptist churches in Kentucky during this formative period of the country’s history. It is a wonderful case study of the dynamics at play in a tumultuous time in a tumultuous location, on the edge of civilization. In shedding light on this particular region, Perry harnesses the full power of  good local history, treating Kentucky as a ‘microcosm’ of the ‘internal struggles and divisive anxieties that gripped the United States’.[III] Perry manages to extract from his texts a vast quantity of information from which nuanced and perceptive observations are made. For example, the fact that as the contested gender relations of the frontier developed into the, ‘socially proscribed roles of an Old South slave state,’ the instances of church discipline for domestic offenses declined rather than increased. Even as ministers preached a higher level of religiosity for the home, praising domesticity as a pious virtue, the authority of the local church to correct and oversee members successes and failures in this area weakened.[IV] Perry has done a commendable job in scouring records, with which he then is able to, move beyond the realm of social history and link patterns of church discipline to larger and wider questions of authority and law. As such, Perry inevitably touches on crucial questions of identity as well as religious vs secular debates. By drawing out these overarching themes the book is a fascinating lens through which to study the tensions that arose in these fledgling communities attempting to hold together seemingly disparate commitments. Religious ideology, scriptural injunctions, moral norms and social standards all pulled at each other all the while being set against the backdrop of continually shifting and unpredictable economic and legal realities.

Perry ably interjects insight into questions regarding the secularization of American society and complicates simplistic ideas of a neat and clean separation of church and state in the early republic. Instead, he charts the process by which religious communities in Kentucky ceded disciplinary authority to ‘secular’ legal institutions as a result of changing economic situations, as well as internal religious disputes and congregational disruptions. This is a key area in which the book makes a significant contribution to our understanding of the forces at work in a pluralistic religious marketplace during this period of revival and reform of denominational structures, identities and norms. The fallout from the restoration movement headed by Barton Stone and Alexander Campbell is well narrated along with the resultant splits and divisions and the ensuing property disputes. However, with what is a strength in the book, one is ultimately left wishing for more discussion of the ecclesiological debates which informed some of these movements and changes in disciplinary procedures. Whilst Law in American Meeting Houses is not an intellectual nor theological history, it could benefit from the inclusion of further discussion of the theological justifications and biblical arguments deployed by various strands of Baptists in their conflicts over church polity and how they related to church discipline.

Additionally, Perry also provides a useful analysis of his sources on the question of race. But again, the analysis given is tantalizingly begging for further exploration and exposition. Perry demonstrates that church discipline was used as a way of policing and controlling the enslaved population and at various times demonstrates that charges were more likely to be brought against enslaved people or free Black Americans than against white church members. In Kentucky of the early republic, conflicted in its relationship to slavery, the ambiguity of the churches commitment to being fully pro- or anti-slavery is reflected in the stories Perry narrates. Ultimately, as the presence of slavery and its ideological support in the antebellum period solidified, a corresponding tendency to charge the Black population and ignore the sins of the white emerged.

Perry has contributed a thorough and unique volume with interest and implications beyond the deceptively narrow scope of the subtitle. It is no less than a case study of the sorts of questions which effect the study of religion in American society in all subsequent areas and eras. For anyone studying American Christianity, work like this is invaluable and much to sought after digested and ruminated upon.

Edward Manger is a PhD Candidate with the Graduiertenkolleg "Authority & Trust" at the Heidelberg Center for American Studies. His research focuses on the intersection of Christianity and history in the 19th century and his current thesis project explores the role of history in the Protestant Churches of the antebellum and Civil War South.
View all posts by Edward Manger →
Tagged  American Studies, History, Law, Religion, Theology, US History.
Bookmark the permalink.