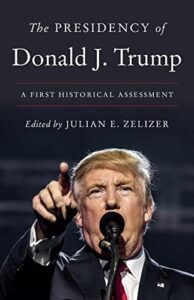 Ever since Donald Trump entered the race for the presidency in June 2015 politicians, journalists, pundits, and, yes, scholars have attempted (and often failed) to position him within the political history of the United States. With The Presidency of Donald J. Trump a prominent group of historians take on the challenge of providing a first historical assessment of an administration which editor Julian Zelizer describes as ‘unlike anything else American democracy had experienced in recent decades, if ever’.[i] Over nineteen chapters, the authors make clear how Trump was both the culmination of long historical developments and a break with historical conventions.

Following the ascendance of Trump we have been served a cornucopia of books exploring the man, the movement, and the moment. Yet, as book critic Carlos Lozada observed after reading over 150 books in the Trump canon, ‘too many books of the Trump era are more knee-jerk than incisive, more posing than probing, more righteous than right, more fixated on calling out the daily transgressions of the man in the Oval Office – this is not normal! – than on assessing their impact’.[ii] While journalists and pundits have written extensively about Trump, historians have tended to write  around Trump.

When N.D.B. Connolly and Keisha N. Blain created the ‘Trump Syllabus 2.0’ in 2016, the assigned readings were not about an individual but about the movements that made him possible.[iii] Since then, several of the authors in this collection have written monographs on the developments we need to understand to appreciate Donald Trump in a historical context.[iv] In this collection, that insight is brought together to paint a portrait not of man nor moment but of the varied political history of the United States and the impact of Trump on both nation and history. 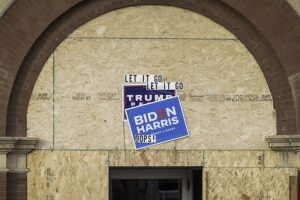 The stated aim of the book is to ‘contextualize a political leader within the long-term institutional, organizational, social, and cultural forces shaping the nation’.[v]

Refuting the deluge of pundits who over the years have described Trump as unprecedented, the historians in the collection argue that we can only understand his presidency as part of various histories. The result is convincing. While not exhaustive – there are, for example, no chapters on such prominent themes of the past six years as the carceral state, sexual violence, or the federal courts – the chapters cover political institutions and movements as well as domestic and foreign policies. The main contribution of the collection is in successfully finding Trump, and his administration, as a part of historical developments.

And yet, there is no denying that Trump also marked a break in political history. His presidency ended with an open assault on democracy and a violent attempt to overthrow the results of the 2020 election. A central challenge, as Zelizer acknowledges in the introduction, is to write about the ‘unconventional’ Trump presidency without ‘normalizing’ it.[vi] Often, an honest assessment of the former president can come off as righteous. Consider, for example, the following: ‘He cared only about himself, his own needs and vanities, satisfying his political base, and enhancing the prospects for his reelection’.[vii] Righteous, perhaps, but it is hard to argue it is not an accurate description of the Trump presidency. 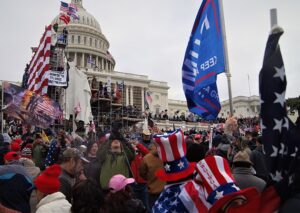 Readers familiar with the plethora of recent Trump books may be surprised to find Donald Trump assigned to something akin to a supporting role in some of the chapters. This is natural for a book that moves beyond the palace intrigue of the White House and the ‘fire and fury’ of the tumultuous Trump years. Indeed, some of the chapters might require the reader to remember the main twists-and-turns of the last few years in American politics.[viii] The context that so often was lost in the never-ending breaking news and the tell-all books, however, makes this one of the more important books on the Trump presidency to date.

Like the previous edited collections in the series, on the presidencies of George W. Bush and Barack Obama, this will prove the go-to volume for historians teaching or writing on the modern presidency.[ix] The authors also provide a model for how historians can (and should) study contemporary history with this engaging first historical assessment.

[ii] Carlos Lozada, What Were We Thinking: A Brief Intellectual History of the Trump Era (New York: Simon & Schuster, 2020), 2.

[viii] Considering the firehose of political news in the Trump years, it might be too much to ask. Indeed, even the writers struggle to always keep track of the turns. On page 189, for example, one of the writers claims that Rick Perry resigned his position as Secretary of Energy in October 2018 when he, in fact, left the administration a year later in December 2019. A minor mistake, of course, but illustrative of the challenges of keeping up with the breakneck speed of political news in recent years.

Oscar Winberg is a postdoctoral researcher at the John Morton Center for North American Studies at the University of Turku. His dissertation looked at the role of television entertainment in American political life and his current research project studies congressional challenges of television news in the 1970s.
View all posts by Oscar Winberg →
Tagged  Book Review, Donald Trump, History, Presidents.
Bookmark the permalink.