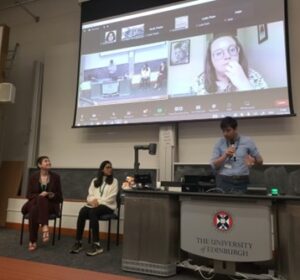 On the second day of the Historians of Twentieth-Century United States (HOTCUS) Annual Conference, three researchers presented their current works-in-progress under the topic of ‘Race, Rhetoric, and Visibility.’ To begin, Dr. Emily Brady (Teaching Fellow, University of Leeds) presented her ongoing research entitled “Passive Resistor/”Agents of Change”: Intersectional Iconicity in Civil Rights Photography. The key to her presentation was the question of why did/do these photographs become iconic? As Dr. Brady elaborated, they often present a juxtaposition between violence and non-violence, especially in images that focused on Black “passive resistors” instead of white violence. Dr. Brady stated that such photographers were frequently creations for the white gaze specifically, a construction of “naked truth for the whole world to see.”  The Civil Rights Movement of the 1950s and early 1960s was built on the principle of peaceful and passive resistance, preached by key figures including Martin Luther King. [1]

Dr. Brady further exemplified her talk with iconic images where the tangible difference between constructed images versus real situations contrast in powerful ways. One example is the iconic image of Elizabeth Eckford of the ‘Little Rock Nine’ (below on the left) when she became separated from the others and was surrounded by a jeering, aggressive white mob. Being taunted and threatened, Eckford remained outwardly calm in what Dr. Brady described as “dignified silence.” Later, however, Eckford described her fear, especially as she awaited at the bus stop for her allies to take her away; ”Safety, to me, meant getting to that bus stop. I feel like I sat there for a long time before the bus came. In the meantime, people were screaming behind me, what I would have described as a crowd before, to my ears sounded like a mob.” [2] In contrast to the violent image of Eckford, Dr. Brady discussed the now iconic image of Rosa Parks (above on the right) which was staged for media purposes in a deliberate construction of iconicity. Parks was made into a figurehead, but in reality, as often was the case, she was delegated to supportive duties as the representative men took to stage light. Dr. Brady thus emphasized how Civil Rights iconography was principally shaped and constructed by male, mostly white, photographers whose imagery thus portrayed whites as perpetrators and instigators of violence and Black citizens as victims. One example is the iconic image of white policemen setting their dogs onto a Black protestor’s stomach, a horrifying encounter with many witnesses. [3] 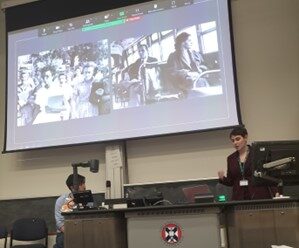 Next, Dr. Brady discussed women photographers’  roles in constructing Civil Rights Movement’s iconography. Here,  the photographer Eve Arnold’s oeuvre is particularly striking. As a white female photojournalist in the 1950s, she was an “alien to the movement as well as being part of it,” as Dr. Brady noted. Arnold became known for her intimate portraits of celebrities as well as her Civil Rights Movement photography that was absent of violence in her way of addressing interracial anxieties. The images she captured of young protestors being trained not to react to the violence and abuse they received at the sit-ins in the struggle to desegregate the lunch counters are, therefore, all the more striking. Arnold framed her work carefully, with an intimate gaze that captured more than the mere likeness, thereby contributing to a different type of iconicity building. Her photograph of Malcolm X thus captures his essence with careful symbolism and composition.

Aashima Rana (PhD Candidate, Dublin City University) presented on Preserving Cultural and Intellectual Oral History by Toni Morrison, part of her ongoing research examining Morrison’s work as a platform to explore the importance of preserving folklore. Rana considered a new way to see through a “lens to preserve own culture,” discussing the myths that were taken to America along with the enslaved, becoming part of the Black American narrative legacy. One such myth was “the Flying Africans,” which shares common ideas with the Greek myth of Icarus. The notion of escapism was a common thread in the Afro-American reworking, Rana suggested, and therefore “has become a powerful metaphor for African-American courage, longing, and conviction.” This differs from the Greek myth, where Icarus’s lack of understanding of the past and his ambition cloud his judgment. By contrast, as Rana explored, the enslaved “seem to fly due to a knowledge received and treasured from the past.” This flying myth is evoked in Morrison’s Song of Solomon, which evokes ancestors’ folklore and folksongs as the protagonist Shine escapes from a ship and swims ashore, where he gains his wings. Thus, Shine evokes another myth-cum-reality where to die by drowning was preferable to dying in slavery. 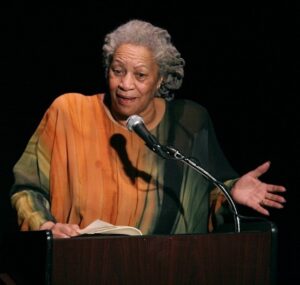 Rana beautifully explained that the importance of evoking folklore is within the “realization [that] magical power is not gained by providing any Icarus-like artificial wings; instead, it is captured in some magical words that only an older person is aware of.” Empowerment and magic thus come from cross-generational ancestral knowledge. This ancestral connection is evoked by Morrison’s inclusion of her own personal historicity in her tales; including songs and tales she grew up with and even assigning a protagonist her date of birth. This is especially evocative in Rana’s consideration; “The knowledge about the past gained through the stories leads them to reconnect with all the other characters and the environment. The notion of history in the character’s minds was changed along with the transformation in their present lives, and that further paints their future.”

Anne Stokes (PhD Candidate,  University of Manchester) then virtually presented Taking a Seat at the Lunch Counter: The Curation and Commemoration of the Student Sit-In Movement. Stokes’s talk also explored the memorialization of the lunch-counter sit-ins, emphasising with Dr Brady the power of iconicity and how such iconicity is realized. Whereas Dr. Brady focused on image-building as icon-making, Stokes explored the replications of the physicality of items that have reached their own iconic status, being presented without protestors sitting on them in museums including the Smithsonian’s Greensboro Lunch Counter (above) and in statues such as in Wichita, Kansas.  [4]

There are different ways of memorializing these momentous moments. Importantly, they also reflected the importance of mass participation, particularly by young people, that Stokes argued “spread like wildfire”, especially in Southern college towns. Stokes clarified that this was a movement that went beyond single figureheads, and focused on “everyday people and everyday activism.” Yet through the preservation of the counters – and not the people – they became the movement’s symbols. However, as Stokes reminds us, some of these attempts to memorialize would also become troublesome, such as when visitors take a seat by the counters and engage in audio-visual immersion in an attempt to replicate the events for someone who was not there. But how would this translate for those from middle-class white backgrounds who therefore would have no possible way to truly understand what it meant to be in that position? To sit there whilst you are being hurled with verbal and physical abuse of any and all kinds? 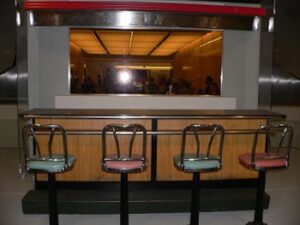 The lunch counter from the original Greensboro Woolworth’s sit-in of 1960, now in the Smithsonian’s Museum of American History. Wikicommons.

The Smithsonian, Stokes considered, has more appropriately created an illusion of immersion by separating visitors from the replica by a glass partition which still creates the sense of being in the seat but still separate and distanced. Such replications and immersions, visual or physical, seek to create a connection in order to unite new generations with the original protesters, commemorating the impact of mass participation in bringing about change.

All three talks were fantastically inspiring. They were a reminder of the role of women, specifically, as agents of change. Women activists, whether on the picket lines, as artists, photographers, writers or others, tend to be relocated into supportive roles. In these powerful talks, however, the women took centre stage, exploring the iconicity of the Civil Rights Movement, the magicalness of folklore of the past for the present, and the commemoralisation of mass protest, a way for a single representative figurehead. Foremost, the adjoining key between the presentations was the visual and ideological understanding of how the power of regular people becomes the driving agency for change.

[1] For further reading, see Austin, Curtis J. “On Violence and Nonviolence: The Civil Rights Movement in Mississippi.” Mississippi History Now, February 2002. [2] “In Her Own Words: Elizabeth Eckford.” Facing History & Ourselves, Race in US History, https://www.facinghistory.org/resource-library/her-own-words-elizabeth-eckford.

The Little Rock Nine were the first  Black students to integrate Little Rock Central High School in 1957, leading to protests and aggression directed at the students.

[3] This construction of a figurehead was similar to what Cornel West in 2009 identified as the “Santa Claus-ification”  of Dr Martin Luther King, Jr. [4] Statue by Georgia Gerber.

Aija Oksman is a PhD candidate at the University of Edinburgh. After an MLitt in Publishing (University of Stirling) and MSc (University of Edinburgh) on radical self-representation of Sojourner Truth and Frederick Douglass, her current research focuses on African American women writer’s literary and counterliterary experience with the FBI. Her research interests are interdisciplinary and intersectional with focus on women’s and other marginalised groups’ literary, cultural and socio-economical interactions and counteractions.
View all posts by Aija Oksman →
Tagged  Event review, HOTCUS, Panel Review.
Bookmark the permalink.