Book Review: The Method: How the Twentieth Century Learned to Act 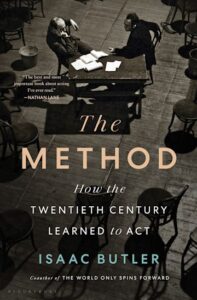 What exactly is method acting? In recent years, the term has become synonymous with the self-indulgent behaviour of actors willing to push themselves and their peers to unhealthy extremes. We might think of Jared Leto sending live rats to his co-stars during the production of Suicide Squad, Jeremy Strong asking to be sprayed with real tear gas on the set of The Trial of the Chicago 7, or Lady Gaga speaking in an Italian accent for nine months for her role in House of Gucci. Unsurprisingly, such instances have led a chorus of voices to criticise the technique. Actors such as Robert Pattison, Mads Mikkelsen, and Brian Cox have all decried the practice as excessive, arrogant, and potentially dangerous, precipitating a wider cultural discussion in which many have begun to echo Laurence Olivier’s famous quip to Dustin Hoffman: ‘My dear boy, why don’t you just try acting?’.[1]

In The Method: How the Twentieth Century Learn to Act, Isaac Butler subjects the Method to a rigorous inquiry which troubles, challenges, and often upends many of these preconceptions. One of the book’s chief ambitions is to demonstrate that the Method is not simply another acting theory, but one of twentieth century’s ‘Big Ideas.’[2] As Butler puts it, ‘[it] brought forth a new way of conceiving of human experience, one that changed how we look at the world, and at ourselves’.[3] By examining these innovations in great detail, Butler charts a steady course through the increasingly murky of terrain of the Method’s inception. The result is an eminently readable account of the way in which acting has evolved through time.

In his meticulously researched study, Butler traces the origins of the Method back to the great Russian theatre practitioner Konstantin Stanislavski. After co-founding the Moscow Arts Theatre (MAT) in the 1890s, Stanislavski set about making a series of radical innovations which he hoped would reinvigorate the art of acting. His experiments led him to develop the “system” — a technique, or series of techniques, which he believed would transform acting from a highly contrived, overwrought, and presentational mode of performance into one of perezhivanie, or experiencing. As Butler explains: ‘Experiencing does not mean to fully become the character, or to lose sight of the self. Instead, the actor’s living consciousness and the fictional consciousness of the part they are playing meet’.[4] By bringing the actor’s and the character’s consciousnesses together, Stanislavski believed that it was possible to reveal the inner depths of the human psyche and, perhaps, the soul.

When Butler turns from the specifics of Stanislavski’s “system” to the wider social and political turmoil surrounding the MAT, he offers a number of anecdotes which breathe life into the company’s colourful cast of characters: the death scene in Maxim Gorky’s Children of the Sun is performed with such conviction that the audience, believing themselves to have witnessed an actual murder, begin to riot; a police chief and regular patron of the theatre is forced to disguise himself in one of the company’s costumes to escape home on the evening the Red Guard would storm the Winter Palace; an actor, caught in the no-mans-land during the Polish–Soviet War, draws on his knowledge of acting in order to summon the courage to demand a temporary ceasefire. In these moments, Butler’s ‘biographical approach’ suffuses this history with a striking human quality.[5]

When, in the 1920s, the “system” finally arrived in the United States, it soon found a home among the larger-than-life personalities of New York City’s Group Theatre. An ensemble of independent artists, the Group were largely responsible for the Americanisation of Stanislavski’s ideals, but it was the near-constant feuding between members Lee Strasberg and Stella Adler which would serve as the primary catalyst for the transformation of the “system.” In his teachings, Strasberg insisted on the use of “affective memory” (a process whereby actors used sensory triggers to conjure obscure, even traumatic, emotions); Adler was adamantly opposed to this practice, arguing that it was how one behaved in the moment of performance that should be the actor’s primary concern. With each accusing the other of misinterpreting Stanislavski’s doctrine, they began to create their own, distinctive systems, thus giving rise to a variety of techniques which would soon come to be known as the Method – the first uniquely American form of acting.

While the Group’s radical experiments were often marred by petty in-fighting, the undeniable significance of Strasberg and Adler’s innovations, as well as the contributions of their friends and colleagues Clifford Odets, Elia Kazan, and John Garfield, among others, ensured that its legacy remained largely intact. When the Group eventually parted ways, many of its members set their sights on Hollywood, taking the Method with them. Here, it would find a wellspring of acolytes and enthusiasts in actors such as Montgomery Clift, Marilyn Monroe, Marlon Brando, Jane Fonda, and Robert De Niro, who would continue to transform the technique in new and surprising ways.

By the 1990s, however, the Method’s monopoly on acting would begin to decline. While Butler outlines some of the key factors behind its gradual demise, the exact reasons remain somewhat obscure. One of the simplest, and most compelling, explanations is that it simply became too diffuse, catchall, and multifaceted to its continue to in its current form. Yet, in this sense, it never truly disappeared. As Butler suggests, ‘[t]he Method—still taught, and misunderstood, and championed, and maligned—is both here and not, hovering over us, ever present and invisible all at once’.[6] While the Method remains enigmatic, Butler’s book offers an invaluable insight into the evolution of a technique which continues to inform how we look at acting and, indeed, ourselves.

Izaak Bosman is a PhD researcher at the University of Cambridge specialising in American literature. His research explores ideas of theatricality in the work of Frank O’Hara and the extended New York School of Poets. More broadly, he is interested in the interdisciplinary relationship between poetry and theatre, dance, and film during the Mid-Century period. He can be contacted via email at ib425@cam.ac.uk.
View all posts by Izaak Bosman →
Tagged  Acting, Book Review, Film Studies, Method acting, reviews.
Bookmark the permalink.