Organised by University College London’s Stephen Colbrook, Pandemics, Public Health, and Statecraft provided a platform for the exploration of the far-reaching intersections between statecraft and contagious disease, highlighting the emergence of identity, memory, and policymaking as narratives vital to advancing our understanding of the state and those who interact with it. By emphasising the role of pandemics in shaping state development, Pandemics, Public Health, and Statecraft clarified a new appreciation for contagious disease as a tool for understanding state development, one that shaped expressions of critique, discrimination, participation, and reform.

Several papers used identity as a tool to broaden our understanding of AIDS beyond the imagery of David France’s 2013 documentary How To Survive a Plague. In so doing, Nora Kassner (UC Santa Barbara), Nic Ramos (Drexel University) and Alex Burnett (Michigan University), Emma Hobson (University of Nevada, Reno) and Scott De Orio all established a more representative appreciation of AIDS and the state. [1] The recurrence of conformity and its many expressions demonstrated a keen awareness amongst scholars of the contractual nature of state participation. Whether it be questions of parenting norms amongst queer parents fostering AIDS-infected children in Kassner’s fascinating paper, ‘Just a Normal Family’, or the perception of conformity amongst moderate activists in Ramos and Burnett’s, ‘One Out Gay Cop’, the discussion of conformity as a tool of participation reinforced the role of contagious disease in reshaping the complicated interplay between identity and the state. Furthermore, De Orio’s framework of ‘good’ and ‘bad’ people with HIV/AIDS highlighted these notions of conformity, shedding light on the connection between identity and acceptability in the social construction of AIDS and how this relationship – like that of Hobson’s study of women and AIDS activism – shaped the state’s interaction with contagious disease, from queer foster parents to early activism in Los Angeles and the carceral system. 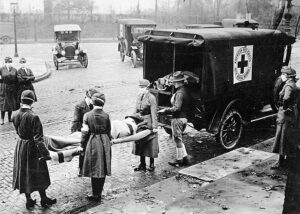 The American Red Cross moving a victim of the 1918 Influenza Pandemic in St Louis, Missouri. Wikicommons

The issue of neglected memory, evolving from the interplay between Rosie Poling’s (University of Cambridge) paper on the 1918 Influenza pandemic and Keynote Speaker Beatrix Hoffman’s (Northern Illinois University) paper ‘The Statecraft of Mass Death’, provided a stimulating discussion about how society collectively expresses pandemic loss and the state’s role in shaping that expression. Given the memorialisation and collective memory surrounding the war dead of World War One, the absence of the Influenza Pandemic of 1918 from public memory in the US – where influenza killed more soldiers than combat during World War One – raised questions about state-crafted narratives of valour as well as notions of administrative inertia under President Woodrow Wilson. As Hoffman’s keynote emphasised, the extent to which the collective memory of COVID-19 would reflect that of 1918 remains to be seen. Yet these questions about the status of collective memory provide opportunities for future scholars to expand our understanding of state-crafted pandemic narratives and their place in our collective memory.

Closing the day, Hoffman’s keynote brought the issues of statecraft and contagious disease full circle. Primarily focussed on COVID-19, Hoffman explored the increasingly blurred lines between the workplace and militaristic notions of the frontline. Reflecting the seemingly ritualised use of war metaphors as a framing mechanism for understanding pandemic responses, Hoffman detailed the existence of essential workers as often exploited and poorly protected ‘war heroes.’ Moving beyond a narrative defined by the pre-eminence of healthcare workers as the only frontline of pandemic response, Hoffman explored notions of expendability amongst low-wage workers in sectors including agriculture and retail, investigating notions of identity that paralleled earlier discussions of representation and participation during the Influenza and AIDS pandemics. 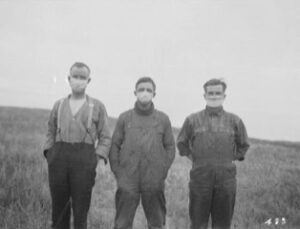 Reflecting on the day’s papers, the presenting scholars had taken vital steps towards clarifying our understanding of contagious disease as a tool for state development. The growing diversity of approaches sheds new light on aspects of statecraft that had previously appeared elusive or even distant. In providing a platform for the exploration of statecraft and contagious disease, this conference has clarified existing questions about state-crafted pandemic responses and their place in broader discussions of state development in the US. It has highlighted the emergence of identity and memory as issues with growing academic capital in the study of the state. Whilst the 1918 Influenza Pandemic, AIDS Crisis of the 1980s, and COVID-19 emerged as focal points, the question of how far contagious disease and statecraft could extend beyond these major pandemic events as a force for state development remains open for future scholars to survey.