The British Association of American Studies (BAAS) Conference 2022 at the University of Hull was a hybrid format, with some panels happening in-person at the beautiful Hull campus, and other panels accessible online. Being at Hull for the conference, but also in charge of chairing one of the online panels on the first day, April 21st, I squirrelled myself away in one of the meeting rooms ready for the 13:00-14:30 BST panel entitled ‘Considering Presidential Legacies: Reagan and Trump’. After a few technical hitches – understandable given that this was the first panel session of the conference – Sarah Thomson, Clodagh Harrington and Alex Waddan were ready to present their papers. The theme of the panel explored how US presidents secure their policy legacies, and how far they have a role in what comes after their years in office. As the chair of this panel, I was really excited to hear how these three papers would overlap, and whether parallels would be drawn between the two presidential legacies. 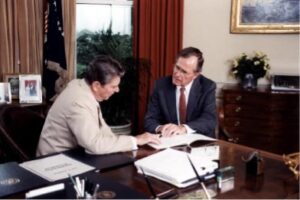 The presentations were 15 minutes each, leaving plenty of the time at the end for audience and panel questions. The first to present was Sarah Thomson, a final-year PhD candidate from the University of Edinburgh. The paper was entitled “The Custodial Presidency? George H.W. Bush as Reagan’s Third Term” and focused on how Bush’s time in office can be seen as a “guardianship presidency,” a continuation of Reagan’s vision rather than an innovator who wanted to put their own stamp on the office. Thomson convincingly argued that Reagan was supportive of the Bush presidency, but the broken promise to implement ‘no new taxes’ meant that even Reagan’s endorsement of Bush’s re-election could not bring with it the support of Reagan voters, particularly ‘Reagan Democrats’, who voted for Clinton. In response to an audience question, Thomson made it clear that this was probably to be expected from the outset; as Reagan’s VP, Bush did not really make a name for himself in significant areas of policy. Bush was set up with a number of opportunities to appear presidential, for example greetings with NASA astronauts, but had to remain loyal to Reagan as they had run against one another in the 1980 Republican primaries. Thomson also had some fascinating insights on the relationship between Bush and Reagan – her wider research, including interviews with staffers from the Reagan administration, has found that the working relationship between the two leaders was far from rosy! 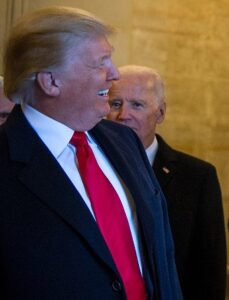 From continuity to change, the next presentation from Clodagh Harrington, an Associate Professor at De Montfort University, focused on the speed with which Biden and the new Congress could enact policy to alleviate climate change. Entitled “Turn Left on Green: the Post-Trump Climate Catch-Up” (I’m ashamed to say it took me until after the panel to realise the wordplay on ‘turn right on red’), the paper examined what leadership legacy actually means, and with respect to climate policy, how far can Trump’s policies be undone by the Biden administration. Harrington emphasised the disparity between how many Americans believe the federal government should do more to protect the climate (two-thirds) and how little change has been implemented by US politicians. When asked during the questions what it would take for Republicans to get on board with changes to climate policy, Harrington stated that some  younger Republican voters are already coming around to change. They are different from their parents, and will end up living through climate change – and in response, some of the rhetoric around the climate has changed, with frames such as ‘protecting the land for future generations’. However, reflecting back on legacy, Harrington made the important point that it is not as if Biden is having an easy time within his own party, with some Democratic senators wanting to mark their own legacies and unwilling to shift on climate.

The final paper was presented by Alex Waddan, an Associate Professor at the University of Leicester. The paper was simply entitled ‘Defining Trumpism’, and Waddan caveated the presentation by saying that this was a work in progress. The central question which arose was “Did Trump present a set of ideas that should be taken seriously”, something that we might meaningfully label as Trumpism, or was it simply rudeness and abrasiveness? Waddan persuasively argued that it is too simplistic to label this as standard populist leadership – while the scapegoating of the ‘other’, attacking cultural elites, and claiming to be the only one who can fix the problems facing the US certainly pertain to populist messaging, he stated that populists are usually outside politically established channels, whereas Trump was a GOP candidate. Trump’s legacies were standard Reaganist fare – tax cuts, deregulation, and conservative justices on the federal and supreme courts. The biggest shift in policy from typical Republican positioning was in trade. Therefore, Waddan concluded, trying to pin down an overarching position of Trumpism was very difficult to do. 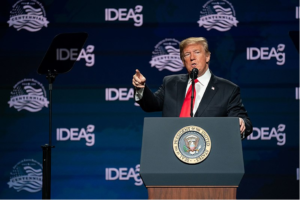 This concluded the presentation sections, and although the audience for the online session were quite quiet, it was really great to see that the panellists had curiosities about one another’s papers that they had the opportunity to discuss. Overall, the session was a really wonderful way to start off what turned out to be a fabulous conference, and the hybrid format meant that even those who weren’t able to attend in Yorkshire were still able share their insights with the BAAS audience.

Review: 'Ideas and Transformations in the Americas', UCL Institute of the Americas PG Conference
Book Review: Formations of United States Colonialism edited by Alyosha Goldstein
Event Review: HOTCUS PGR and ECR Conference 2020: ‘America at and beyond the ballot box’ (Online)

Emma Hall is a fourth year PhD candidate at the Department of Politics and International Studies at the University of Warwick. Her research focuses on the how an exceptional national identity is inculcated through the US education system, and the degree to which American exceptionalism is perpetuated in presidential rhetoric on domestic and foreign policy.
View all posts by Emma Hall →
Tagged  BAAS 2022, Conference Review, Review.
Bookmark the permalink.