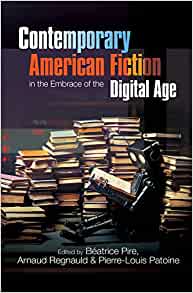 Published earlier this year, Contemporary American Fiction in the Embrace of the Digital Age is a valuable resource for addressing issues around technology in the contemporary world, which it does by looking at how American fiction positions itself within the digital era. By examining how some of the important novels, short stories, films, and television series published and released since 2000 directly respond to the new digital landscape, Embrace of the Digital Age asserts that we can aspire to a better understanding of the conditions of that landscape, rather than simply being complicit in following technological advancement in whichever directions it goes. As both critics and readers, this understanding is essential due to ‘the technical systems that regulate our lives’ and determine the shape of our fiction – a shape which ‘American writers have envisioned, in the early 21st century’ while ‘imagining ways to live within, without, or beside’ these ‘systems’. [i]

In their shared introduction, co-editors Pire, Regnauld, and Patoine discuss how their collection builds on French theorist Paul Virilio’s work in particular. Written by a diverse group of global scholars, the chapters include analyses of major works by Jennifer Egan, Jonathan Franzen, Tao Lin, David Foster Wallace, and many more. Other chapters include fresh insights into different media such as Blade Runner 2049 (2017) and Mr. Robot (2015-2019). The highlight of the book is the chapter on Lin’s breakout novel Taipei (2013), which Sophie Chapuis uses as an interlocutor in a comparison of Lin’s performative autofiction and his real-life Twitter practice. As Chapuis posits, the significance of this distinction (but also active blurring of lines) transcends a Lin case study: ‘when looking at contemporary texts that are both life-based and digital-based, one must navigate between cyberspace and the physical world, and consider both the virtual and the real selves’.[ii]

Bridging the gap between Lin’s place in the Alt Lit movement and his contribution to digital content culture, Chapuis further complicates the recursive loops of fiction and reality Taipei itself productively instigates. Chapuis close reads Lin’s Twitter account and passages involving Taipei’s Lin stand-in Paul equally, pointing at how the internet environment invites expansion of games of autobiography and invention, games of person and persona, of authenticity and exhibitionism. Chapuis details Taipei’s impressionistic style as a result of these games, a style which mimetically captures a fractured, elliptical Twitter feed effect despite the novel’s linguistic license of more than 280 characters. Chapuis interestingly (and perhaps over-) simplifies the genre of life writing – which she says ‘means writing live’[iii] – as she extends beyond the premise and logics of autofiction when categorising Taipei. Her discussion of Lin’s range of formal practises and his use of a variety of literary modes (life writing, autofiction, post-postmodernism, the New Sincerity, postcritique, more) is as generative as much of the work in Embrace of the Digital Age – from Jason Shrontz’s look at the ‘media ecology in transition’[iv] in his chapter on Egan’s A Visit from the Goon Squad (2011), to Pire’s own chapter on Franzen, Purity (2015), and data/novel transparency.

Like many of the book’s chapters, Chapuis’ is never limited to only a discussion of literary aesthetics. She unpacks what she calls the ‘postracial sensibility of Tao Lin’s narrative’, which as she says ‘seems to derive from an attempt at constructing a self, stripped from any cultural specificities’[v] and has particular resonance within the context of digital selves. Chapuis foregrounds a sustained interest of Embrace of the Digital Age: the liberating potential for collapsing identity labels, which comes with certain technological innovations like social media, the internet, computers, and mobile phones. Transforming this potential into success is a vital thread in Chapuis’ argument that, due to their focus on homogenous white male American writers, is not as fully realised in some of the book’s other chapters.

The critical and theoretical backdrop of Embrace of the Digital Age is comprehensive, exemplified by the way Chapuis goes back to the coining of ‘autofiction’ by Serge Doubrovsky in 1977. This establishment of elaborate critical scaffolding and this negotiation between case study and the wider field is maintained throughout the book, from the use of Lacan’s semiotic layers and palaeontologist André Leroi-Gourhan’s work within the same section of the introduction, to Jessica Hallen Hansen’s thorough engagement with the Wallace Studies canon in her chapter on his short story collection Oblivion (2004). Pire, Regnauld, and Patoine’s imperative with Embrace of the Digital Age, it seems, is to bring together a body of work that draws far and wide from existing scholarship. This body of work uses recent developments in contemporary American fiction to generate complex, ambitious conversations about how this fiction deepens broader cultural thought surrounding the ‘innovations’ that ‘have redefined the way we live and conceive of the world, as well as the way we interact with each other and understand human beings in their ever closer relationship to machines’.[vi]

These ‘machines’ take many forms in the book, as would be expected given the 2020s’ proliferation of websites, programmes, devices, and gadgets; but Pire, Regnauld, and Patoine successfully distil the breadth of technological advancement into a cohesive, cogent discussion of both the merits and risks of the digital age as staged in contemporary fiction. Contemporary American Fiction in the Embrace of the Digital Age impressively uses a lot to say something necessarily little, something quite simple, which the book’s introduction frames as a question: ‘Have languages and literatures been transformed by these recent advances?’[vii] The answer is simultaneously, paradoxically a resounding yes (which can be broken down and deconstructed in detail) and a fundamental no (because we have still not learnt how best to interact with each other, despite these ‘advances’).

George is a third-year PhD candidate and Graduate Teaching Assistant at King’s College London. He is working on the distinction between 'postmodernism' and 'post-postmodernism' in the work of Percival Everett, Jonathan Franzen, Zadie Smith, and David Foster Wallace. He is also a graduate of the University of Reading, Co-editor at King's English, Assistant Editor at Coastal Shelf, and a short fiction and culture writer. He has academic work published or forthcoming in Alluvium and Humanities.
View all posts by George Kowalik →
Tagged  American Literature, Contemporary Fiction.
Bookmark the permalink.