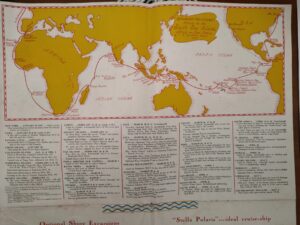 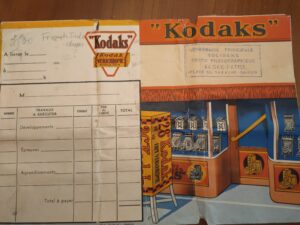 I am grateful to have been recipient of a BAAS Founders’ Award – the support has been invaluable to my research into the early uses of amateur colour film. The BAAS Founders’ Award provides UK scholars with financial assistance for research travel and invited conference presentations, and more recently has been broadened to include research conducted remotely, boosting inclusivity and encouraging reduction of carbon footprints. This particular grant allowed me to undertake further extended archival research on the project ‘Kodachrome Travels: Colour and the “American Pacific” Imagination’. 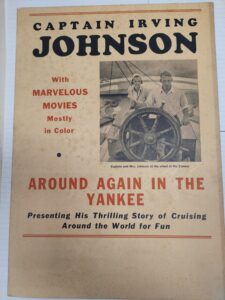 This project focuses on colour films made across Oceania by American amateur filmmakers, beginning in 1935 when Kodachrome stock was first marketed. During the years just before the Second World War, vast increases in tourism on the seas coincided with profound transitions in the Pacific region, with European colonial networks still entrenched and US expansionism soon to exert its greatest impact. The locales and peoples that these travellers encountered and filmed were on the verge of total militarisation, the culmination of centuries of political and commercial competition. These films, mostly housed in library archives and rarely screened – though increasingly reaching new audiences through streaming platforms – not only provide historical records of Pacific sites but reveal a hidden history of colour film and its relations to shifting perceptions of cinematic realism. At the same time, they indicate the fashioning of American selfhood on a global stage during a period when established colonial networks were yielding to ‘American Pacific’ ambitions.

Applying for the award was a relatively straightforward process assisted by a streamlined approach and clear structure provided by the BAAS form, and I found designing the itinerary for the proposal helped to crystallize my plans and firm up the timeline. However the travel timeline did change due to covid lockdowns, restrictions on mobility, and archive closures, and BAAS was able to extend the period to use the award into 2022. Thanks to this, the award supported travel and research at libraries and archives (March-April 2022) at locations in the Northeast of the US including Connecticut, Massachusetts, and Maine. I was grateful for the extension, as in-person research became highly constrained through the first extended period of restrictions and then again due to the omicron strain spreading in late 2021-early 2022. 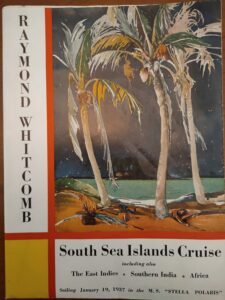 The key archival visits (New York Public Library, Mystic Seaport Library and Research Center in Mystic, CT, the Northeast Historic Film (NHF) archives in Bucksport, Maine, and the Blue Hill Library in Blue Hill, Maine) have been central to filling in the gaps and further developing core chapters of my forthcoming book Kodachrome Travels. Due to the pandemic, archives were closed for most of 2020-21, and in fact at some of these archives, such as NHF, I was one of the first non-local researchers on site since the pandemic, and special considerations had to be made. (Indeed, one archival source for this research, the Kodak collections at Eastman House in Rochester, NY, has still not reopened to external researchers as of April 2022, and will have to be visited at a later date).

I have been in touch with archives and archivists throughout the pandemic, online and via email, and have been able to make good progress on the project: scanning and locating materials though finding aids, identifying new resources, following up on leads to other archives, and benefitting from support for off-site researchers that some archives have been able to provide. However, many relevant materials are simply not catalogued in detail, and even more are either too fragile, or the archives lack the staff, to be copied and digitised. The specificity of the research and extensive bulk of some of these boxed archive materials – most dating from the 1930s – has meant there simply has been no substitute for on-site research. 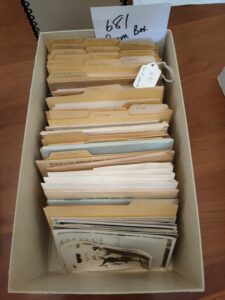 The Mystic Seaport archive houses diverse materials relating to filmed circumnavigations from the period. These include rare Kodachrome holdings (some digitised for research access) and boxes of ephemera, accounts, personal diaries and letters, audio interviews, clippings, theatrical reviews, and other materials that have helped to piece together a fuller account of the uses and impact Kodachrome filming on journeys, and how the films were screened to audiences. The NHF and Blue Hill Library contain materials important to another book chapter, dealing with travelogue conventions of the 1930s and ways that amateur Kodachrome impacted on popular practices, perceptions, and beliefs about distant places and peoples in the years leading up to the Second World War and to the subsequent ‘American Pacific’ era.

Support from BAAS further underpinned work to be presented as a keynote at the New Zealand and Pacific Studies conference in Marseille, where I will be speaking on how travelogues and Kodachrome may have influenced modern – and particularly interwar – US perceptions of the Pacific. Overall, the BAAS award has given me a chance to conduct essential on-site research and to develop the project in new directions, and I am grateful to have had the opportunity. 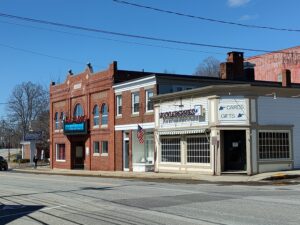 A Brief Consideration of the American Empire Through Modern and Contemporary Poetry
‘Unbelievable Originality’: Lining Tracks and Performativity in Zora Neale Hurston’s Folk Concerts
STORIFY OF #BOOKHOUR CHAT ON BETWEEN THE WORLD AND ME BY TA-NEHISI COATES

Jeffrey Geiger is Professor of Film at the University of Essex, where he established the Centre for Film and Screen Media. Books include Facing the Pacific: Polynesia and the U.S. Imperial Imagination (2007), American Documentary Film: Projecting the Nation (2011), the co-edited Film Analysis: A Norton Reader (2nd ed. 2013), and Cinematicity in Media History (2013). Work has appeared in numerous collections and journals such as New Formations, Third Text, African American Review, Cinema Journal, Studies in Documentary Film, and PMLA. He has been a member of BAAS since 1998.
View all posts by Jeffrey Geiger →
Tagged  Research, Research Funding, Visual Culture.
Bookmark the permalink.