Book Review: The South: Jim Crow and Its Afterlives by Adolph Reed Jr. 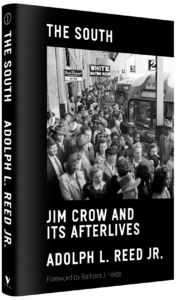 An autobiography such as The South: Jim Crow and Its Afterlives may, therefore, seem a strange sojourn from this analytical warpath, an impression furthered by Reed’s former criticism of Jim Crow memoirs and favourable back cover quotes from former recipients of Reed’s ire including Cornel West. [2] Yet The South is both grander and more polemic than a mere memoir, framing itself as a multi-genre last testament of the final generation to live through Jim Crow. Inverting the autobiographical trope of triumphing despite one’s environment by transcending it, The South is instead thematically punctuated by the societal determination of selfhood, with individuals’ actions and attitudes being pre-determined by the larger definitional struggles (class-based, gendered, and racial) in which they are necessarily enmeshed.

By emphasising the particularities of moments from Reed’s life, The South disarticulates ahistorical categories including white supremacy, arguing that psychological and/or moral abstractions including prejudice and the racism/anti-racism binary all neglect the contextual forensics of ‘how the order [Jim Crow] operated, how its official and unofficial protocols organized people’s lives’. (6) The result is an instructive rather than confessional work in the best tradition of W.E.B. Du Bois’s Dusk of Dawn and Jean Toomer’s Cane. [3]

Reed’s challenge to the alluring underplaying of intraracial differences common to what Michelle Boyd has called ‘Jim Crow nostalgia’ turns a series of biographical vignettes into a coherent yet digestible project emphasising both Jim Crow’s ‘architecture of laws and prohibitions’ and their ‘local-option wrinkles of enforcement’. (2) [4] Rooted in the ‘petty, private transgressions’ (15) and ‘checkboard’ (16) residential segregation of New Orleans, the overall message is best conveyed by The South’s cover image, depicting prescriptive signs for a ‘White Waiting Room’ at a crowded bus station hovering over the reality of a vast interracial tumult. Here, in the ‘imperfectly chartable realm of personal interaction and daily life’ (27), Reed saw Jim Crow suspended, however briefly.

This approach’s strange beauty lies in revealing the daily negotiations in which the logics and etiquette regimes undergirding Jim Crow were reproduced and made ‘tacit and mundane’ (2) between generations. This is further enhanced by Reed’s position as an ‘outside-insider’ (ix) who grew up in both the North and South and thus never found Jim Crow ‘fully second nature’. (13) Two instances typify this quality. First, when Reed aged six was barred from a pony ride in New Jersey−an older Reed now suggests that the ride operator was not necessarily prejudiced but ‘may simply not have wanted to jeopardize his job by breaking the law of convention’. Second, when Reed asked his grandmother whilst taking the Algiers ferry why they were separated by chicken wire from passengers on the ferry’s other side. In a ‘stage whisper’, his grandmother replied: ‘A lot of crazy people ride this ferry, and they have to sit on the other side’. (11) In this manner, The South continually isolates, interrogates, and denaturalises Jim Crow’s often hazy daily arithmetic.

Downplaying race also destabilises the race-transcending success narrative recurrent within many Jim Crow memoirs. [4] Jim Crow, Reed suggests, was ‘explicitly and definitively about race, at the same time it was fundamentally not really about race at all’. (86) In Reed’s judgement, it primarily sought to enforce African Americans’ ‘subordinate position’ within the ‘mainstream economy.’ (36) Analysing Jim Crow’s discrete position within the subtending evolutions of American capitalism thus reveals the ‘unsettling continuity within the large fabric of change’ in today’s South, such that its defeat ‘left the undergirding class system untouched and in practical terms affirmed it’. (140) Indeed, The South’s most fascinating portion highlights how local politicians employed recent campaigns against New Orleans’ Confederate monuments to reaffirm a race-transcending narrative that celebrates ‘progress from a benighted racist past’ (138) and thus obscures how racial equalisation has since been countered by income polarisation under neo-liberalism.

Granted, in a sub-200-page work certain themes including the educational and justice systems are inevitably discussed tantalisingly briefly, and Reed makes little pretence of writing a comprehensive history of Jim Crow’s roots or temporal contours. Whilst The South progresses chronologically, the fourth chapter reads as a semi-detached analysis of racial passing and is most likely to stir controversy, particularly Reed’s final judgement of the Haliwa-Saponi campaign for tribal identification’s ‘pathetic quality’. (88)

If there are any frustrations, however, it is the slight suspicion that the left’s great counter-puncher may be pulling some punches. Concluding by arguing that ‘when reckoning with the past becomes too much like allegory, its nuances and contingencies, its essential open-endedness, can disappear’ (141), Reed fails to cite specific ‘allegorisers’. This risks dulling a potent critique of how the ‘tendentious assertion that nothing has ever changed…divesting the past of its discrete foreignness and contingency’ (141) may reinforce recent left theorising’s ‘flight from concreteness.’ Only those previously familiar with Reed will sense the implicit critique of the 1619 Project and Afro-Pessimism made explicit elsewhere, including in pressers for The South. [5]

This desire for yet more Reedian rhetorical fire, however greedy, only further underlines this discussion’s importance to historically-catalysed activism as we move further beyond Jim Crow—our last clear chronological container for America’s racial histories—if not its material legacies. Particularly for trans-Atlantic readers, this unsettling yet immensely engaging work thus reveals as much about the arc of racial politics during its long construction as it does about the mid-century United States.

As Jim Crow’s retreat into memory leaves contemporary politics further paralysed by symptoms of ‘racial sameness’, The South ultimately represents a timely reminder of history’s open-endedness. Inveighing against the often nihilism-inducing structural weight of American capitalism, The South illustrates, vignette by engaging vignette, how recovering the discrete differences between racial orders may expand our possibilities of moving beyond them.

[1] Adolph Reed, Class Notes: Posing as Politics and Other Thoughts on the American Scene, (The New Press: 2001).

Tom Cryer is a second-year LAHP-funded PhD student at UCL’s Institute of the Americas, where he studies memory, race, and nationhood in the twentieth-century United States.
View all posts by Thomas Cryer →
Tagged  Book Review, The South.
Bookmark the permalink.