Book Review: The End of Ambition: The United States and the Third World in the Vietnam Era by Mark Atwood Lawrence 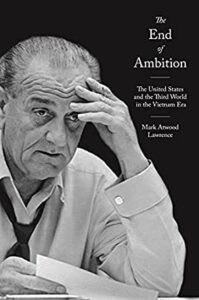 If there was anything that most historians had firmly placed on the list of Richard M. Nixon’s accomplishments – good or bad – it was that his presidency engineered a rightward shift in US foreign policy. Yet, according to Mark Atwood Lawrence’s important new study, The End of Ambition: The United States and the Third World in the Vietnam Era, even this too must be stripped from the 37th president’s beleaguered historical legacy. An analysis of US policy towards the ‘Global South’ during the 1960s, Lawrence’s book argues that the key transitions away from the ‘ambitious’ policies of the John F. Kennedy years were made not by Nixon but Lyndon Johnson. Under the pressure of the Vietnam War, political change at home, and increasing anti-Americanism abroad, Johnson abandoned his predecessor’s interest in transformative global change to focus on stability and lower costs, even if that meant embracing pro-US strongmen. Nixon’s subsequent ‘doctrine’ to this effect merely codified in rhetoric what was already the case in practice.

The End of Ambition makes this case over eight detailed chapters. The first three work to set up the overall arc of US policy towards the Global South in the Kennedy and Johnson years, while the remaining five cover bilateral case studies illustrating these general trends. Key to the book’s argument is the work done in those first chapters; establishing that – despite Johnson’s deliberate attempts at projecting continuity following Kennedy’s assassination – the Kennedy years were somehow different, more liberal, more progressive, than those before and after. There is, of course, considerable scholarly debate about this. On one side you have those who feel that Kennedy’s was a transformative administration cut short. His soaring rhetoric, his not infrequently articulated sensitivity to the racial and economic legacies of imperialism, and his pro-development, pro-democracy programs like the ‘Alliance for Progress’, are the key evidence here. Others maintain that, rhetoric aside, the Kennedy team rarely transcended Cold War dichotomies, remaining both sceptical of Third World ‘neutralism’ and willing to tolerate repressive regimes that toed the American line (particularly that which ruled in South Vietnam). Lawrence charts a middle course here, admitting that the administration had ‘no central guiding principles’ but instead embodied conflicting tendencies that, on balance, reflected ‘the ambitious liberalism which resonated so powerfully within America… in the 1960s’. (22)

Johnson’s arrival in the Oval Office shifted that balance. This was partly, Lawrence suggests, a matter of personality and preference. In contrast to his heroic efforts to address racism and poverty at home, Johnson was less concerned with such issues abroad. He also tended to understand foreign policy as a discussion among elites and thus was less responsive than Kennedy to arguments about how US policy impacted the global grassroots. Johnson was also infamously intolerant of dissent, particularly if it appeared to involve greater knowledge than his own. More liberal, ‘globalist’ figures in the administration – like Ted Sorensen, Adlai Stevenson, and G. Mennen Williams – found themselves increasingly marginalised in decision making.

The shift was also driven by events – primarily the Vietnam War, itself a potential example of Johnson’s move towards more traditional, martial, solutions to Third World problems. Unwilling (and unable) to give up either his expensive ‘Great Society’ domestic agenda or the expensive war in Vietnam, Johnson was desperate to avoid foreign policy crises that might divert time and resources from these two demanding priorities. A changing domestic political scene – due to right-wing backlash against the Great Society and shifts in Third World politics, driven in part by a backlash against the Vietnam War – only further strengthened this tendency. Lawrence’s case studies chart the consequences. Chapters Four and Seven show how the administration made peace with (and, to a degree, aided) the rise of pro-American dictators in Brazil and Indonesia, while Chapter Six documents its deepening embrace of the Shah in Iran. The remaining two cases document the steadily growing distance between the United States and the mainstream of Global South opinion through a review of relations with India (Chapter Five) and the white supremacist regimes of southern Africa (Chapter Eight).

Though foreign actors and foreign archives make their appearance, this is primarily a book about US policymakers, a pursuit that remains valuable despite recent shifts towards more transnational approaches. It also offers a persuasive interpretation of US foreign policy towards the Global South in a critical period, one that subsequent scholars will need to wrestle with. While Lawrence makes it clear that US policy shifted in this period, the question of how much, and how significantly, certainly remains. If one is inclined to give Kennedy less credit – as many Third World critics in the 1960s would have been – then Johnson seems merely a continuation of standard, Cold War US foreign policy. It is also just as possible to give Johnson more credit – seeing him as more committed to racial equality and poverty alleviation abroad than Lawrence does – in which case Nixon once again becomes a more transformational figure. Along those lines too, it can be asked whether policy choices made under wartime duress carry the same significance as those articulated as part of a deliberate ‘doctrine’. Regardless, Lawrence’s deeply informed study certainly marks yet another chink in what remains of Nixon’s historiographical armor.

Sean T. Byrnes is a Senior Instructor in World History at Western Governors University and an Adjunct Associate Professor of History at the University of Maryland Global Campus. He earned his Ph.D in history from Emory University and is the author of Disunited Nations: US Foreign Policy, Anti-Americanism and the New Right (Louisiana State University Press, 2021).
View all posts by Sean Byrnes →
Tagged  American History, Book Review, Johnson, Nixon.
Bookmark the permalink.