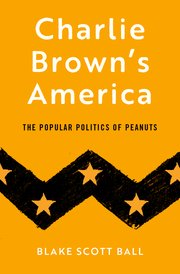 Figure 1. Front cover of the book.

Blake Scott Ball’s biography of Peanuts’ cultural life chronologically documents the development of Charles M. Schulz’s work from a daily comic strip in seven US newspapers, to a national icon that articulated Cold War anxieties and the values of a past era. Though Peanuts is an artefact of extensive cultural significance, as Ball points out it has been ‘woefully understudied’ [5]. Ball’s study is the first to provide an extensive investigation into Peanuts’ place in Cold War American life.

The book’s chapters are focused on how the comic strip developed in response to different movements and historical events: three pivotal ones discussed are the Civil Rights era, the Vietnam War, and the women’s movement. In all chapters it becomes clear that the strip could be simultaneously interpreted as evangelical, ‘wishy-washy’, or poignant. Overall, Ball’s exploration into the complexities of Peanuts’ reception is a key strength of the study.

Before Ball’s work, many books on Schulz and Peanuts tended to focus on Schulz’s life; two popular works within this biographical genre are Good Grief: The Story of Charles M. Schulz (1989) by Rheta Grimsley Johnson, and Schulz and Peanuts (2007) by David Michaelis. A shift in Peanuts studies occurred with the publication of The Comics of Charles Schulz: The Good Grief of Modern Life (2017) by Ian Gordon. Gordon’s book is considered the first to investigate the meaning and impact of the comic strip. Unlike Gordon, Ball firmly ties his analysis of Peanuts to the strip’s Cold War context. Ultimately, Ball’s work veers away from the biographical lens many studies have employed, and instead positions the comic strip’s cultural implications at the centre of the study. The death of Schulz in 2000 and the continuation of Peanuts popularity will likely lead to more cultural and historicist analyses of Peanuts. 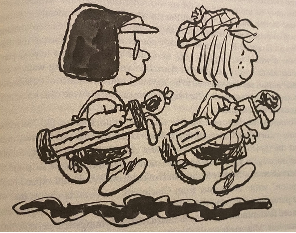 One of the strongest elements of Ball’s book is how he examines the way the characters of Peanuts took on lives of their own. Though Schulz was a supporter of women’s sports, and to an extent rights, he was not supportive of lesbianism. As with famous figures in literature, including Sherlock Holmes, the characters of Peanuts gained a following and meaning outside of the strip itself. The character of Lucy Van Pelt is a prime example of this. Ball’s investigates how she was seen as many things: by many male journalists as a stereotype of women who are ‘too assertive’ [153]: as part of a criticism of pro-abortionist thought [164]: and as a ‘pop-cultural [ambassador] of second-wave feminism through Ms. Magazine and the fight for Title IX’ [183]. For her readers Lucy was symbolic of all of these things and more. Ball thoroughly delves into the many representations and interpretations of Lucy and other characters.

Another key character Ball analyses is Franklin. In Chapter Four Ball offers an examination into Schulz’s somewhat reluctant 1968 emergence on to the civil rights stage. Despite his hesitant arrival, Ball explores how, though Franklin’s character lacked an authentic voice at the beginning, Schulz’s strip managed to communicate pro-integration messages without receiving heated confrontation [87]. Interestingly, Chapter Four goes on to investigate how the comic strip mirrored the progression and limitations seen in the representation of Black characters in 1960s mainstream US culture. Unlike many previous studies, Ball offers an insightful and detailed perspective on Franklin’s position in Peanuts. 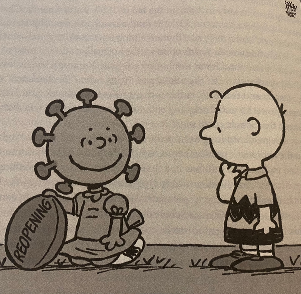 The epilogue brings Ball’s study of Peanuts into the twenty-first century. If anything, Ball reaffirms his statement that the political ‘wishy-washiness’ of Peanuts has enabled it to live on and resonate across age, gender, ethnic, and cultural divides. It would have been fruitful for Ball to write more about the role of Peanuts in the twenty-first century; instead, the epilogue does not fully consider the extensive reprintings and reimaginings of Peanuts globally in the last twenty years. However, this was not the chief aim of the study, and Ball does give readers a well-researched and comprehensive assessment of the impact and enduring legacy of the iconic comic strip.

Georgia Woodroffe recently obtained her doctorate from the University of Exeter in US literature and cultural history. She is currently a freelance editor and writer.
View all posts by Georgia Woodroffe →
Tagged  American comics, Book Review, Peanuts.
Bookmark the permalink.