The Promise and Threat of Black Detroit in the Age of the Great Migration: The People v. Ossian Sweet

In the first decades of the twentieth century, no northern city drew more southern migrants than Detroit, ‘City of Tomorrow’.[i] As one Free Press reporter noted in 1917, ‘Detroit’s unexampled prosperity is the lodestone that is attracting thousands of Negroes’.[ii] Between 1910 and 1920, Detroit’s Black population increased almost eightfold, and then threefold again between 1920 and 1930.[iii] Over the same two decades, however, the geographical area into which these migrants were herded, ‘a densely populated, sixty-square-block section of the city’s Lower East Side’ called Black Bottom, did not grow at all.[iv] Those who lived in this segregated slum were crowded into dilapidated housing, and they suffered the ill-health that such conditions typically produce. According to the same Free Press reporter, residences in Black Bottom were ‘unspeakably vile’.[v] While the wages new migrants earned at Ford and other factories were relatively high, few had the means to challenge the deepening racial divide in the city by buying property beyond the boundaries of Black Bottom. High-earning professionals—doctors, lawyers, successful business owners—would be the first to transgress the residential colour line in the mid-1920s. Even with the help of organisations like the NAACP and support from concerned citizens across the country, Black Detroiters’ successes would be limited, and very hard-won. 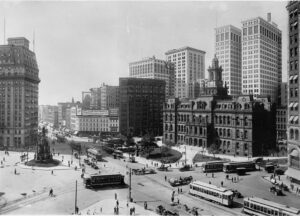 Ossian Sweet, like so many, was drawn north to Detroit by the promise of prosperity. Born in 1895, he was the eldest living son of a farming family in central Florida. As a child, he witnessed a lynching in his hometown. He left the segregated South at age thirteen when he was sent north by devoutly Methodist parents to study at Wilberforce College in Ohio, before moving on to the prestigious Howard University in Washington, D.C., for medical training. At the age of 25, he became one of only 2,500 medically-qualified Black doctors in the US. In 1921, as a young professional, he moved to Detroit and met Gladys, the woman who would become his wife. They soon married, then spent a year travelling in France and Austria. Sweet attended lectures given by Marie Curie at the Sorbonne. When the pair returned to Detroit, Ossian’s practice began to prosper. Black Bottom could not contain the middle-class ambitions of this family, and they bought a new house on Garland and Charlevoix, in an otherwise all-white neighbourhood. ‘I had hoped to have a home for my baby’, Sweet would later say, referring to his infant daughter Marguerite.[vi] Ossian and Gladys wanted ‘a place where [Marguerite] could attend school and her environments would be healthy and helpful’.[vii]

Over two days and nights in September 1925, Ossian Sweet, his family, and a select group of friends were forced to defend the house at 2905 Garland Avenue against a crowd that had formed in the street to run them back to Black Bottom. Just as it had in several similar cases of middle-class Black incursion onto white Detroit real estate earlier that summer, the mob sought to intimidate the Sweets with their presence. Their actions grew bolder as their number swelled. They threw rocks at the roof. They shattered windows. The police cordon meant to protect the Sweets made no move to break up the crowd. (This was a police force that had been lately described by a city judge as ‘honeycombed by Klansmen’.[viii]) With all parties short of sleep and tension high, rifle shots rang out from an upstairs window. A white man fell down dead across the street. The Sweets went on trial for murder.[ix]

In Sweet, the National Association for the Advancement of Colored People (NAACP) saw a perfect spokesman for their national campaign against residential segregation: soft-spoken, highly educated, middle-class—a man of considerable refinement and reserve. This would be a mutually beneficial relationship. Thanks to the NAACP’s intervention, the Sweets were represented in court by the most famous defence attorney of the day, Clarence Darrow. Moreover, internal papers show how hard the NAACP’s leaders worked to generate publicity and much-needed funds from the Sweet trial. In a pro forma letter sent to the leader of every New York church, community group and Masonic lodge likely to be sympathetic to the cause, National Director of Branches (and native Detroiter) Robert W. Bagnall captures the broad appeal of the trial in one neat triad. ‘Dear Friend’, Bagnall writes,

“Shall ten men and one woman go to prison for life because they defended their home and persons when the mob attacked?

Shall the mob be encouraged thus to attack your home?

Shall colored people be forced by law to live in the future in slum districts?”[x]

This may be sophistry, but it is masterful propaganda. With three simple questions, the reader is implored to consider the past, present and future implications of the recent events in Detroit. Moreover, the focus of the subject of the action is abruptly pulled—first perhaps distant, in third person singular; next uncomfortably close, in second person; and finally unavoidable, in an all-encompassing plural. Wherever you look, Bagnall suggests, the effects of the Sweet case cannot be ignored. Newspaper editors agreed. With the acclaimed Darrow on their side, and the NAACP press office trumpeting their cause, the travails of the Sweets became big news.

So, in the last months of 1925, the trial of Ossian Sweet in Detroit grabbed the attention and imagination of a nationwide audience. Several newspapers printed handsome portrait photographs of the Sweets alongside double-column headlines announcing the latest developments in the case.[xi] Black and white readers alike were able to put faces to the characters in this unfolding courtroom drama. Darrow claimed in court that a Black man’s home is his castle just as much as a white man’s, and he has every right to defend it. By the end of November, after lengthy deliberation, an all-white jury could not reach a decision on the defendants’ guilt or innocence. Judge Frank Murphy declared a mistrial, and charges were subsequently dropped against all but the shooter, Henry Sweet, who was acquitted in a second trial. The Sweets had won.

Sweet could be forgiven for expecting that his family’s life would change for the better. As sharply contrasting outcomes for the successful principals in the case show, however, the NAACP’s approach to racial uplift offered less tangible benefit to the Black man in Detroit than it did to the sponsored poet in Harlem, or even to the allied white man. Judge Murphy was elected mayor of Detroit on the back of his role in acquitting Sweet. Darrow was lionised for his part. And with the money raised during the Sweet campaign, the NAACP was able to found its Legal Defense Fund. No such fortune came to Sweet. His motives for leaving Black Bottom—his family’s health, their greater happiness—were proven right, but at enormous cost. Within fifteen years of the home defence, his daughter, his wife, and his brother Henry all died of tuberculosis.[xii] Sweet shot himself and died in 1960, at the age of 65.[xiii] When rich and poor alike were made to suffer the deadly consequences of segregation and the squalor it produced, neither wealth nor social position could effectively differentiate the fates of Black Detroiters.

[vi] Sweet quoted in Phyllis Vine, One Man’s Castle: Clarence Darrow in Defense of the American Dream (New York: Amistad Books, 2004), in caption of photograph of house at 2905 Garland Avenue, presented between pages 146 and 147

Historians at Play: American History in Modern Board Games
Book Review: Literary Fiction: The Ways We Read Narrative Literature by Geir Farner
Over the Ice: Polar Exploration from the Air

Samson Thozer is a first-year PhD student in American Studies at the University of Manchester. His research concerns the formation of Black identity in interwar Detroit. He has a BA in English Literature and American Studies, and an MA in English, both from the University of Manchester. Between 2017 and 2021, he lived in the USA, teaching at Pennsylvania Highlands Community College and working with kids at the YMCA. He recently self-published a book called Halfway to Everywhere.
View all posts by Samson Thozer →
Tagged  African American History, American Working Class, C20, Civil Rights, History, Resarch.
Bookmark the permalink.